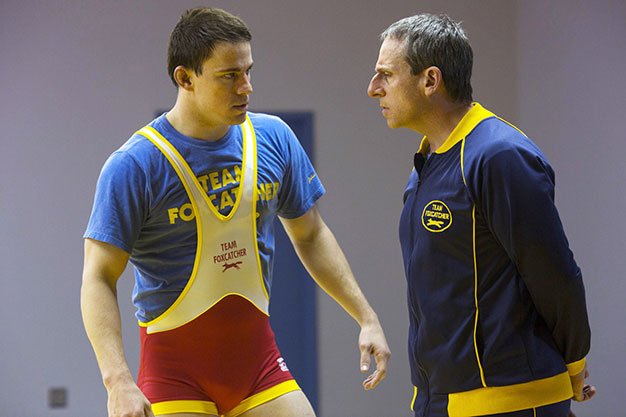 After 2011’s Moneyball, director Bennett Miller returns to the chilly tone of his debut feature, Capote, for another tale of interpersonal tensions and murder, though this time the result isn’t quite as impressive.

In 1987, Olympic gold medalist Mark Schultz (Channing Tatum) was recruited by John du Pont (Steve Carell) to build a wrestling team that could win gold in the 1988 Seoul Games. It ended badly. The script divides itself awkwardly among three principals – Mark’s older brother David (Mark Ruffalo) also gets caught up in du Pont’s ambitions – and Miller drenches every scene in heavy portent.

All three leads wear distracting prosthetics, which work against Tatum and Ruffalo’s naturalistic performances and make Carell’s precise, creepy turn as the selfabsorbed, deluded du Pont seem far too obviously unhinged. (At TIFF, I joked that Carell might be able to do what Andy Serkis never could: win an Oscar for playing Gollum.)

Some have argued that the makeup is accurate. And maybe it is, but that seems like a pointless argument when Vanessa Redgrave is right there, looking exactly like herself as du Pont’s imperious mother and showing us how powerful an unadorned performance can be.