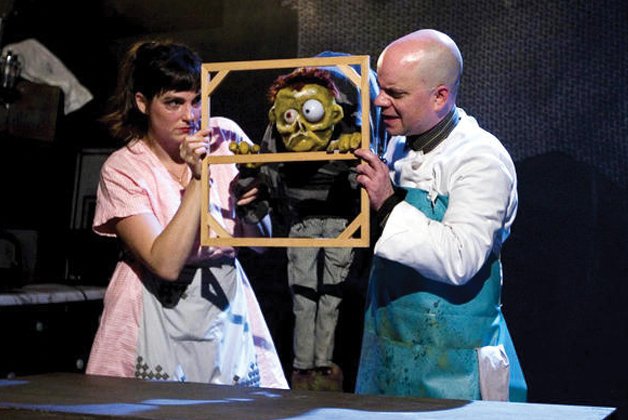 Over the past few years, Eric Woolfe’s cute and spooky puppet and magic shows have become a Toronto Halloween tradition. This year’s instalment is a zany sequel of sorts to Mary Shelley’s famous monster parable. Following Viktor Frankenstein’s death, his alchemy-obsessed hunchbacked assistant Fry winds up a homeless drifter in a dystopian police state, where he falls hopelessly in love with a greasy spoon server after she offers him some leftover home fries.

The large cast of comedic characters (some human but most puppets) are all performed by Woolfe and Kimwun Perehinec, who work so well together that they can seamlessly trade puppet characters mid-scene without missing a beat.

Many of the show’s plot points showcase Woolfe’s signature use of magic – elaborate trick props or deft sleight of hand developed in consultation with “Magic” Mike Segal – in awesome gross-out moments that are more campy and funny than horrific, including a scene where the server severs her hand only to have it surgically replaced with a new one with a mind of its own (a la 1991 horror flick Body Parts).

It takes a while for Fry to emerge from the puppet menagerie as the show’s central character, but the disfigured puppet with a creepy accent eventually becomes a lovable wild-card misfit whose story parallels many elements of Shelley’s original.

Like Viktor Frankenstein, Fry amasses a deep knowledge of medical science and technology, but only “sort of” masters the technique of re-animation, with humorous results. Like Frankenstein’s monster, Fry is relegated to the margins of society due to his strange appearance and behaviour. He survives on food scraps while dodging menacing gangs of alley-dwelling hobo puppets.

The colourful set and props designed by Melanie McNeill comprise a Halloween treat bag of eye candy. The focus is a large upright trick crate at centre stage that Fry uses as his re-animation machine but can also makes characters appear and disappear. Another unique feature is that certain scenes are suddenly scaled down and played out with miniature diorama-sized versions of the puppets and sets.

The cozy east-end DIY Red Sandcastle Theatre storefront space only seats 25, so you can bet this weirdo Halloween puppet show will sell out.