Even the mansions of Rosedale offer free book lending, but it would help if lenders weren't just stocking their household trash 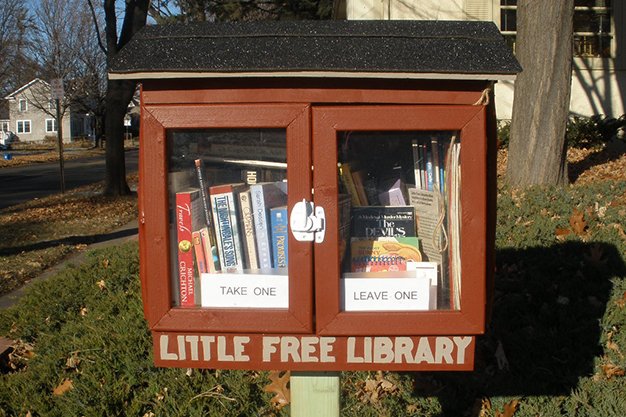 The words due date from the Toronto Public Library stresses me, but there’s a novel way to borrow books without fears of fines.

Bibliophiles have installed cute book-houses, inspired by the Little Free Library movement, on their lawns to attract fellow neighborhood readers. This appears to be a fab method to engage your community in reading, but weak selections are squandering this offline community sharing plan.

On paper, community peer-to-peer book lending makes plenty of sense, but personal investigation has yet to turn up a meaningful summer read.

Roncy’s Gillian Batcher has a thriving little library she started in May, but admits, “I just took my first book one week ago.”

Multiple visits to other locations have turned up little in the way of fresh material, but Batcher explains how her particular book-house is staying fresh.

“I’ve been feeding it my own books every few days.”

Electronic readers have freed up people’s homes from burdensome paperbacks, but some people just like the feel of printed material.

“It’s clearing out my shelf space because you can’t throw out a book,” Batcher says.

Well-read copies of Bourne Identity and Harlequin romance novels clogged up several cases alongside books that haven’t been flipped through in decades.

Politically there were musings by Winston Churchill on his hobby of painting and the slightly more modern political story Mulroney by Stevie Cameron.

Margaret Atwood was well-represented in many communities, but I wouldn’t put it past Toronto’s sprightly scribe to walk local neighborhoods, dropping off books to clear out the attic or for a promotional prank.

The strong desire not to throw out a book has many neighbors using the little library idea to ditch their most unloved books. Seriously, did someone actually believe a first year textbook on greenhouse management was in demand?

Thankfully the book-houses created by crafty woodworkers are fab to look at, and, in many instances, more impressive than the contents. Batcher bought hers from Little Free Library and spruced it up before installing it.

The org has registered approximately 40 Toronto book-houses on their Google map and claim there are some 25,000 community libraries worldwide. A charitable registration fee is required to be pinned to their map, but the real fun is finding ones not pinned.

Batcher informs me she has spotted several unlisted spots around her neighborhood that I haven’t found. While traveling to registered locations, it’s best to keep seeking out unregistered ones because book-houses tend to be clustered around each other. Their locations suggest people have discovered them strolling by and then opted to do it themselves.

“I saw it in the neighborhood and looked it up online,” Batcher agrees. “It’s changing this corner. We are going to do cute things like rate-a-book for future readers.”

The clustered factor makes them easy to explore, but unique literary tastes were not discernible based on neighborhood.

I had more fun creating a literary adventure map of book-houses and riding to their locations in anticipation then the actual discoveries located inside.

Great expectations were created at a Russell Hill Road mansion when their book-house lit up like the Lost Ark when opened. Unfortunately, the priciest free little library was a half-empty catfish ratchet. It’s possible people had raided it of all the good content, but the whole neighborhood was weak on reading material. Or maybe these large homes still have oodles of room for libraries.

Conversely, neighborhoods where there’s little living space, there are zero book-houses to be found. The lack of lawn does play a role in a single person being able to set up a public library, but Oriole Parkway community garden is growing more than flowers.

They’ve installed a registered little library as part of their community space.

The book-house has one of the better collections, making it easy to pick up something to thumb through while unwinding in the spacious relaxing park.

On a ride home a few weeks back, I came across five very large boxes of books.

The bibliophile was clearing out a sizable room of knowledge: Award winning sci-fi and literary prize winners books in Spanish and Italian political theory and beat poetry.

Not am I only looking forward to reading this score, but paying it forward and populating book-houses.

Some of them dearly need it.