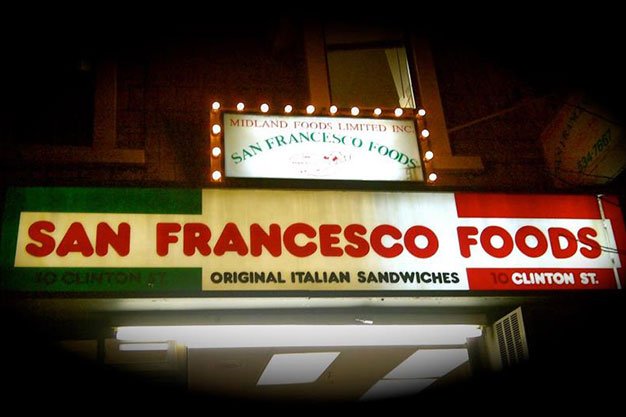 Former Centro chef Jason Carter opened his first restaurant this week. Dandylion (1198 Queen West, at Gladstone) has taken over the former Unit bar space and is now serving dinner Tuesday to Sunday. The menu is split into three courses, each with a choice of nine plates, like vinegar-poached mackerel with onion cream and horseradish, trout with carrot sauce and smoked paprika, and walnut tea cake for dessert.

Nearby, chef Jonathan Poon of Chantecler has branched off with one of his cooks, Jesse Fader, in a separate project called Bar Fancy (1070 Queen West, at Dovercourt). As you’ve guessed, the place with exposed brick walls is ironically “fancy”: cheap beer and mixed drinks, no expensive wines or crafted cocktails. A small snack menu includes fried chicken with Wonder Bread and deliciously numbing wings spiced with Sichuan peppercorns.

Pizzeria Libretto’s third location is now open for lunch and dinner in the financial district at 155 University (at Adelaide). Meanwhile, its fourth location on King West, a joint project with Porchetta and Co., remains under construction.

On the other end of Queen, a banner with crude Batman-related jokes and the promise of apple fritters on November 17 has appeared on the outside of Leslieville’s shuttered Bero restaurant at 889 Queen East (at Logan). It’s actually a teaser for an incoming café called the Purple Penguin that’ll serve coffee from Pig Iron Coffee Roasters, fresh-squeezed juices, bread from St. John’s Bakery and the aforementioned fritters.

Cult favourite San Francesco Foods (the veal sandwich place beside the Monarch Tavern in Little Italy) is opening a more central outpost in the old Pizzaiolo spot at 609 Queen West (at Portland).

Signs for a fish-and-chips spot called Easy Catch Fish and Chips are on the windows of 1446 Yonge (at St. Clair), right between Delica and Holy Chuck burgers. The place is still in hiring mode, so it’ll be a while till you can get those chippies.

Winter is notoriously difficult for restaurants not located in the warm confines of a shopping centre. Leslieville’s Glas Wine Bar (1118 Queen East, at Jones) is getting proactive by offering Sunday brunch and buck-a-shuck every day from 5 to 7 pm and Fridays and Saturdays 9 to 11 pm. The place also does a vegetarian tasting menu on Tuesdays that’s worth the trek.

Know of any openings, closings or how to make a cocktail using NeoCitran? Email food@nowtoronto.com.