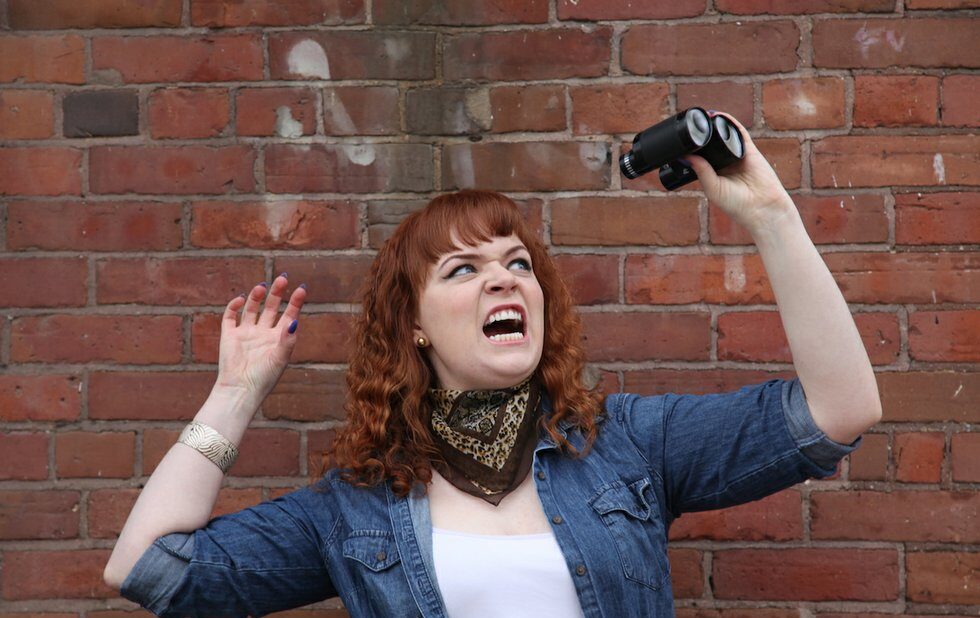 Looking like this and unsure what shows to see? Don't worry. Rebecca Perry's Adventures Of A Redheaded Coffeeshop Girl should be one of them.|Count on Everyone Loves Marineland to make a big splash at the Fringe.|Gavin Crawford shows you how easy it is to book tickets to see his show.

Looking like this and unsure what shows to see? Don't worry. Rebecca Perry's Adventures Of A Redheaded Coffeeshop Girl should be one of them.

ADVENTURES OF A REDHEADED COFFEESHOP GIRL

After Rebecca Perry‘s delightful 2014 Fringe show Confessions Of A Redheaded Coffeeshop Girl, the sequel comes as a bit of a letdown. But Perry’s winning presence and charm make it watchable.

Former barista Joanie Little (Perry) gets an internship to work with Jane Goodall and her chimps in Tanzania. So she bids goodbye to her boyfriend Marco and sets off to study primates, who include not only the apes but her giant tent mate Jake and a couple of competitive interns who are all clamouring for Goodall’s attention.

Joanie also has to contend with heatstroke, the rainy season and her loneliness. But she soon finds her footing working in a sanctuary and helping out a chimp raised among humans.

Despite Tim Lindsay‘s effective (if overly literal) sound design, Perry and director Matt Bernard have difficulty establishing the African setting and distinguishing among all the characters. The sense of authenticity Perry brought to Joanie’s experiences at a cafe is missing here, and the show feels simultaneously underwritten and rushed. Worse, you never feel anything’s at stake. Even the songs, although soulfully sung by Perry with a two-piece band (Da-Rell Clifton and Quinton Naughton), feel shoehorned in.

Perry is an engaging, warm performer. As a work-in-progress, the show has promise, but it needs to percolate a little longer.