THAT'S JUST 5 KIDS IN A TRENCH. 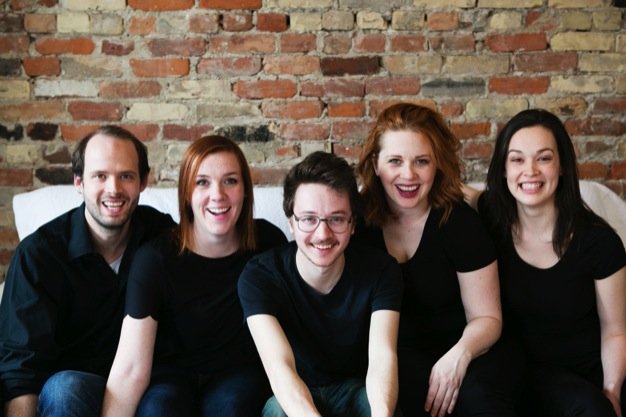 I’m so glad I caught the sketch troupe who go by the very classy and irreverent name of Dame Judy Dench (note the spelling the Oscar-winner spells her name with an “i”). Its five members are wildly talented, each has a distinct look and vibe (one of my problems with sketch troupes is that some performers are often interchangeable) and their work is fresh, theatrical and has a great big range.

In That’s Just 5 Kids In A Trench Coat!, they prove they can do just about anything: social satire (making fun of PC moms at the playground) physical comedy (a bundled up couple attempt to get out of their winter clothes to have sex) absurd situations (ever wonder where pizza comes from?) and current pop culture commentary (the zombie craze, jaded hipster music fans).

The opening sketch is a brilliant bit of meta theatre. Four chairs face out at the audience, with a frustrated Claire Farmer sitting in one of them before the show begins. Soon her cast mates all stagger in late, with excuses, accompanied by a “Fringe volunteer” (Shannon Lahaie). They then proceed to mock sketch comedy (“it’s the death of art”) and the show itself, including the opening sketch. Bravo.

Other standout scenes include one about a police mime (Gavin Pounds) who whimsically interrupts an investigation – with dire consequences. The end goes on too long, but that’s intentional, since it leads to a follow-up sketch that takes the situation to its logical absurd conclusion. The tone is unpredictable and exciting.

Pounds is also excellent as a geeky amateur magician whose girlfriend (Farmer) tries to break up with him. It’s beautifully modulated and directed by Second City alum Marty Adams, and hits that sweet spot between silly and awkwardly realistic.

The same can be said about a sketch in which a man-boy (Chris Leveille) goes to a Hallmark store to buy a Father’s Day card. Through a series of sharply written monologues and one carefully chosen prop, you get a sense of his character’s loss. It’s funny, sad and just about perfect.

Leveille shows lots of range in a scene in which he plays the aunt – a former silent screen star – of a young woman (Jessica Greco) and her fiancé (Pounds). Leveille, again beautifully directed by Adams (the costumes and props help define the character), delivers a shrilly hilarious aria of self-importance and bluster, and it’s thrilling to watch, right to the final moment.

A scene in which a woman (Farmer) photobombs a sports reporter (Lahaie) starts off cute then quickly goes to an surprising and poignant place. And hookup culture gets savagely skewered in a sketch in which a dating man (Pounds) and woman (Greco) discuss taking things to the next level when the man’s roommates (Lahaie, Leveille) introduce themselves and their history with the guy.

Only one scene doesn’t work, and it involves a doctor recommending that a patient see different specialists. A couple of blackout lines could also be sharpened.

But those are quibbles. The finale, about identifying a criminal from a police lineup, is ingenious in its conception and in recalling an earlier scene.

I expect to see more of this troupe, and wouldn’t be surprised some of its members are snapped up soon by Second City.