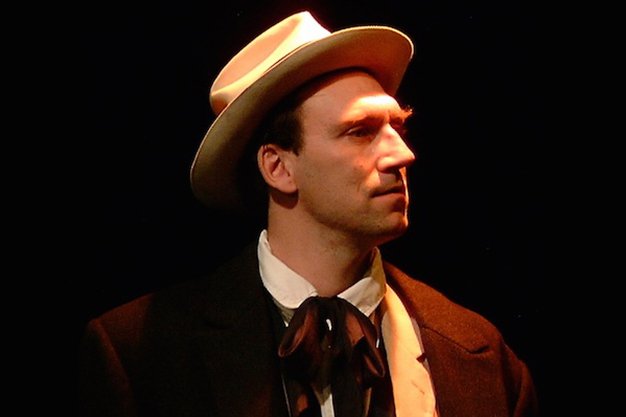 YEATS: A CEREMONY OF INNOCENCE?

Writer/actor/director Daniel Giverin‘s play about the life and work of Irish poet William Butler Yeats is obviously a labour of love. But his script needs dramatic shape and a point of view. The question mark in the title suggests Giverin’s own confusion about his material.

He begins by narrating the story of Yeats, from his childhood, frequent family moves (Western Ireland to Dublin, Dublin to London) and first publications to his fateful meeting with Maud Gonne, who would haunt the poet his entire life. Then, somehow, after donning a jacket and tie, Giverin begins playing Yeats himself, who has dreams of creating a national theatre that would unite the divided country.

Giverin has a rugged, solid presence and a mellifluous voice, but he doesn’t seem fully present onstage and frequently stumbles over his lines. That’s understandable, because a lot of the show consists of Wikipedia-like facts, with snatches of poetry that are then interrupted for more plot synopsis. I’d rather watch Giverin deliver the background to poems and then have him read them in full.

There is one remarkable scene in which he recounts the controversial opening night of JM Synge’s future classic The Playboy Of The Western World, followed by a touching Irish song after the death of a friend. It’s a rare moment of showing rather than telling I wish there were more of them.