UK artist brings explorations of nomads and outsiders to Canada 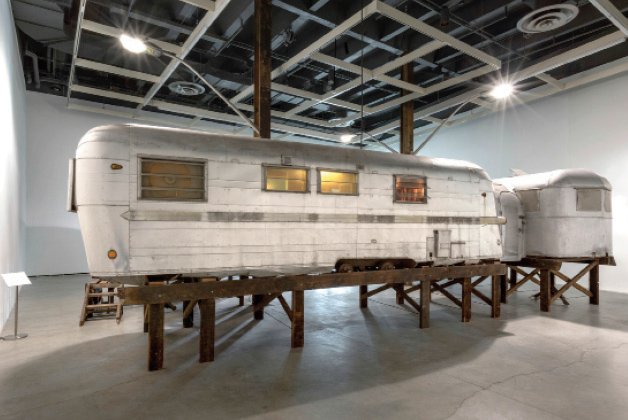 Commissioned by biennials and art institutions, Briton Mike Nelson travels the world assembling big, ephemeral installations that reflect his concerns with nomads and outsiders and the spirit and politics of place.

Amnesiac Hide, the Turner Prize nominee’s first Toronto show, summarizes his time in Canada. His meditations on wilderness and those who venture into it also serve as elegies for his friend and collaborator Erlend Williamson, who died in a mountain-climbing accident.

Behind a wall displaying Williamson’s tattered outdoor gear and possessions, Nelson projects a quiet slide show of circular stone fire pits. Woodland and riverside scenes could be from any Canadian camping trip, but he throws in a few roadside shots that hint at urban homelessness. Another installation of discarded photocopiers and large-scale paper copies reveals omens of death in fragments from a diary of an Asian trip, sad citified remnants of an adventurer’s life.

Less directly about Williamson, a series of sculptures made from garbage found on BC beaches gets the Canuck title Gang Of Seven. It’s supposed to be the work of the Amnesiacs, an imaginary motorcycle gang central to Nelson’s practice. Like all the characters his installations evoke, they’re difficult to pin down: eschewing the conventional biker aesthetic of chains and black leather, they make primitive totems in which plastic jugs and baseball caps stand in for animal skulls.

The show’s centrepiece, however, is the massive Quiver Of Arrows. Riffing on “circling the wagons,” Nelson’s connected four vintage Airstream trailers on wooden supports into a single square structure that visitors can enter.

He’s left puzzling clues to the identities of these vagabonds whose vehicles can no longer go anywhere. Material about a guru, Arabic children’s books, frayed oriental rugs and an Indian-style toilet may refer to 60s counterculture or the war on terror, but there’s also a football helmet and philosophy and sci-fi paperbacks. The musty-smelling environment feels truly haunted.

More open-ended and ambiguous than the work of Janet Cardiff and George Bures Miller or Iris Haüssler, Nelson’s narrative installations are equally compelling.