Former premier Bob Rae is leading a fundraising campaign for Dixon Hall, which serves young people in the neighbourhood 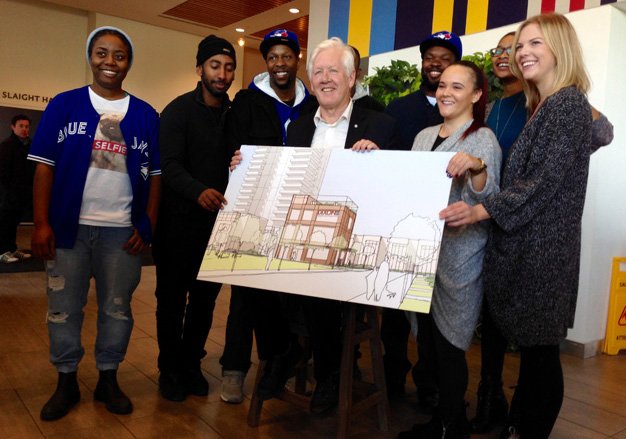 Ashley Fraser first got involved in Dixon Hall’s youth programs as a toddler in summer camp. Since then, the Regent Park resident has been connected to the east side community centre for youth in some form or another – from learning to be a counsellor-in-training, to gaining employable skills in food services to working with her peers in youth drug prevention. Right now, the 20-year-old is a volunteer.

“I’m just playing my part in the community and giving back to the program that gave to me so much for 17 years,” Fraser said after a news conference on November 25.

Fraser was among a group of Dixon Hall members on hand for an announcement at Daniels Spectrum, a multi-purpose arts hub on Dundas East, this morning. A campaign to raise more than $3 million for a new youth centre is being chaired by former MP Bob Rae. As the former representative for Toronto Centre, of which Regent Park is included, Rae has seen the neighbourhood dramatically transform, from a series of affordable housing projects to a mixed-income, mixed-use condo development.

“We’re now about two-thirds of the way through the revitalization, and we don’t want to lose some of the important elements. It’s a time of renewal but it’s also a time of continuity in terms of needing to have the same focus on kids,” Rae said. “Some of the challenges facing young people are still around, and we want to make sure we’re paying attention to all those elements of community commitment that were always there.” 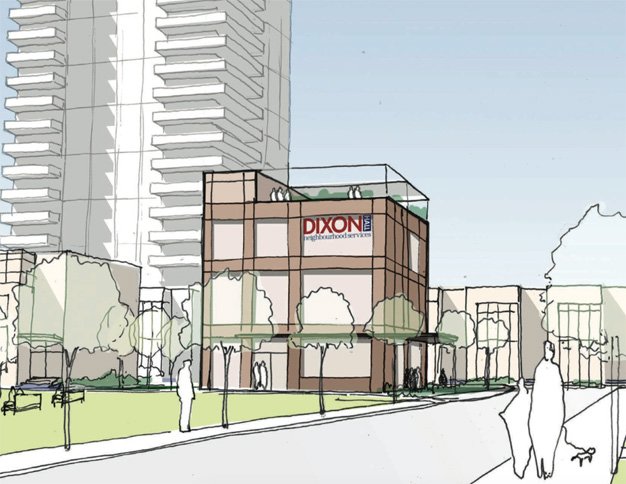 An artist’s rendering of the new Dixon Hall youth centre, which will be located at the corner of Wyatt and Nicholas Avenues.

Dixon Hall, which has provided mentorship, sports and arts programs as well as camps to more than 600 young Toronto residents each year for over four decades, saw its long-time youth centre on the south side of Regent Park demolished in 2014 to make way for the new development. For the past year, volunteers have been trying to make do in a portable trailer near Regent Park Aquatic Centre. A 6,000 square foot, multi-storey building slated for the corner of Wyatt and Nicholas Avenues would allow Dixon Hall to take on 150 more kids.

“The youth centre is important in this revitalization because it sends a huge message to the city, to the world and most importantly, to the young people we work with, that this is a space that’s for them that will be consistent and safe and stable and nurturing,” said Sandra Costain, the interim director of Dixon Hall’s children and youth services.

The campaign committee has already raised $500,000. Rae said that committee members will be calling on local communities, governments, and the private sector to help raise the outstanding amount. He’s confident that Daniels Group, the chosen developers, will have shovels in the ground in 2016.

“The land has been given to us by the City of Toronto, and we’re very grateful. The Daniels Group has agreed to build the building at cost,” Rae added. “Every member of the board has agreed to make a substantial contribution.” 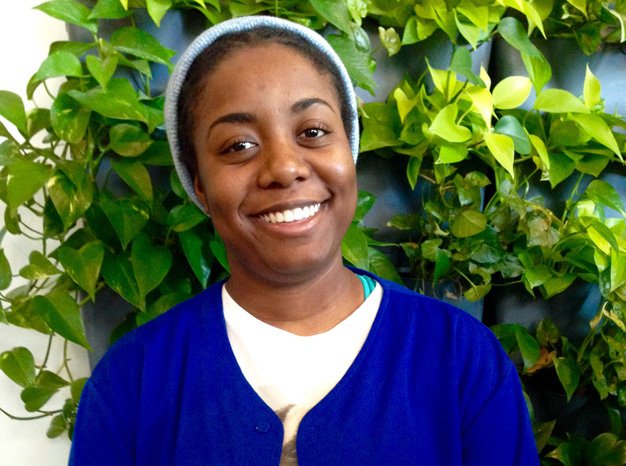 Ashley Fraser has been apart of Dixon Hall’s youth programs for over 17 years.

The new youth centre must be built during the current phase of neighbourhood revitalization, which is expected to be completed in 2017. Fraser, who plans to still be volunteering then, looks forward to the move. She said the larger facility would allow even more young people in Toronto to benefit from the type of support she received.

“I’ve seen people from Regent Park from when I was younger to now, and they’ve gone through worst things than me by far. There’s something about Dixon Hall that draws people in and brings out a better person. I love this program,” she said. “Having a building, knowing it is ours and having somewhere to go is amazing.”