ROSEWATER written and directed by Jon Stewart, based on the book by Maziar Bahari and Aimee Molloy, with Gael Garcia. 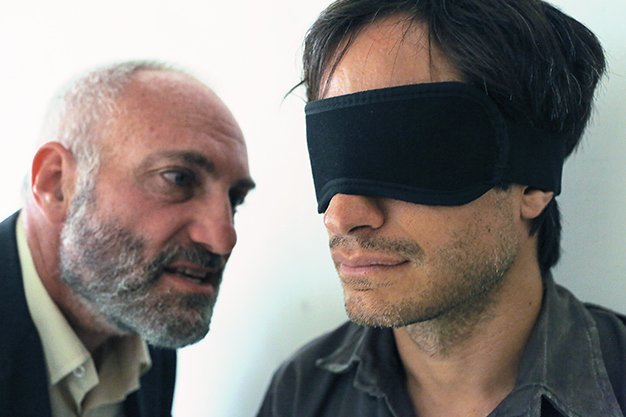 Gael Garcia Bernal might not be the first person youd choose to play Maziar Bahari, the Iranian-born, London-based journalist whose appearance in a Daily Show Tehran field piece brought him to the attention of Irans fundamentalist government.

But first-time filmmaker Jon Stewart saw something in the Mexican actor that led Stewart to cast him as the lead in Rosewater, a drama that re-creates Baharis experiences in Tehran during the 2009 election.

Maziar is a clear example of a triumph of the human spirit, Garcia Bernal says during Rosewaters TIFF press day.

Hes a person who found comfort and perspective and compassion through humour… and [his story] expands to take on a much more universal aspect. It becomes a story that puts the finger on a subject that is very important, which is that institutionalized torture is happening everywhere in the world.

Hes talking about the 118 days Bahari spent in solitary confinement at Tehrans Evin prison, with the occasional interrogation.

Garcia Bernal had played real people before most notably the young Che Guevara in 2004s The Motorcycle Diaries but Bahari is someone reared in an entirely different culture. Did that present more of a challenge?

I found the character like any other character, just by information, he says. Getting to see Jons point of view of Maziar, talking to him end-less-ly, asking him endless questions. And getting to know a lot about Iran, through documentaries, reading books and imagining what it could be. I mean, Ive never been there. I wish I could go there. Jon has never been there either.

Garcia Bernal also talked to his Iranian co-stars Golshifteh Fara-hani and Shohreh Aghdashloo, who play Baharis sister and mother respectively as much as possible.

It was incredible to talk about all of this with them, because theyre the first ones to say Its not like that. Iran is, you know, a sophisticated place with normal people.

He also had to learn to inflect his speech with a slight Farsi accent.

The actor was drawn to Rosewater for its larger commentary on fundamentalism, which Stewart frames as authority bent on repressing citizens natural inclination to understand the world around them. Its simply impossible, he says, to keep people in the dark indefinitely.

The joke is on them, he says, on those power structures that build these huge machineries to keep someone from bearing witness or from asking the difficult, dangerous questions. They build this structure that gets destroyed by somebody just going, I saw this. And thats it. He becomes enemy number one.