The defence has thrown a number of Hail Mary passes, and the scene outside the courthouse after Monday's verdict was just another attempt to reshape the narrative 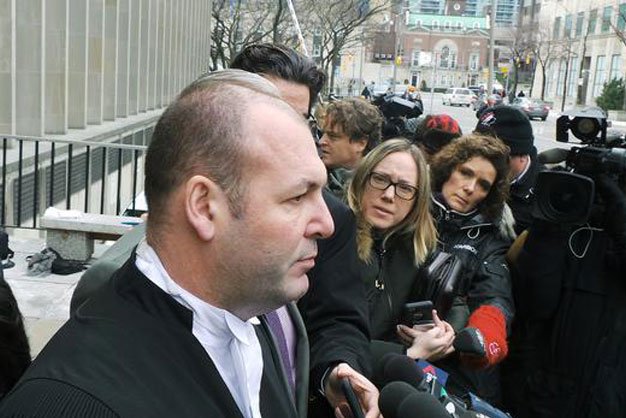 Cop lawyer Peter Brauti has arguably been laying the groundwork for an appeal for months.

“I’ll see you after lunch.”

On the day Toronto Constable James Forcillo was found guilty of attempted murder in the shooting death of Sammy Yatim, there was no reaction from the man himself. The assembled media were looking for one, but true to form, Forcillo gave nothing away.

He was prepared for the worst. He had to be, given the video evidence showing him firing nine rounds in two separate volleys at close range at Yatim, six of them as the teen lay dying on the floor of a TTC streetcar.

For all the case’s legal complexities and questions about the risky Crown strategy of laying two separate charges against Forcillo (second-degree murder and attempted murder), it was the raw footage of the incident caught at different angles by cameras inside the streetcar and the iPhones of several passersby that proved the game-changer. Without it, there likely would have been a different verdict. It was hard to watch it – as the jury had to dozens of times over the course of the three-month trial – and not be dumbstruck by Forcillo’s actions.

But even before the ink was dry on the verdict, Forcillo’s lawyer, Peter Brauti, was outside the courthouse creating a little more legal misdirection about how the video “compromised” the jury’s impartiality. Not all members of the jury, mind you, he acknowledged. Some who admitted to seeing the video during the jury selection process were, it appeared to him, sympathetic toward Forcillo.

Still, Brauti announced that the defence plans to file a motion asking for a stay of the proceedings (to throw out the verdict) and, if that fails, to appeal the verdict. Brauti has seemingly been laying the groundwork for an appeal for months, also revealing that he’d written the Attorney General months ago to request a change of venue for the trial and that it be adjudicated by a judge alone. Both requests were denied.

Not that a trial before a judge alone would have made a difference for Forcillo. Justice Edward Then, who ultimately presided over the trial, certainly wasn’t in the mood to do the defense any favours. Then clearly didn’t appreciate the odd fast one Brauti tried to put past him, or Brauti’s remark to the jury during closing arguments about being forced by the judge to fight the case with “one hand tied behind my back.”

It was one Hail Mary pass after another, the dramatic scene outside the courtroom one more bomb to shape the narrative ahead of the next phase of the trial.

Brauti went as far as to suggest that Forcillo had placed himself at the mercy of the jury, if you will, admitted to making a “mistake” when he fired the second volley at Yatim.

To be clear, Forcillo did not express regret for any of his actions. That was part of his problem. The other was the reason he gave for firing the second volley. Forcillo said it was because he believed that Yatim was getting up off the floor of the streetcar. The jury saw it for what it was: a preposterous lie.

Brauti insists that Forcillo was following his training, only that was hard for the jury to square with the actions of the other officers at the scene who kept their guns holstered. And from the testimony offered by force’s own commanding officer on the use-of-force, Deputy Chief Mike Federico. It came out during the trial that Forcillo had drawn his gun some 12 times in the short three-and-a-half-year span he’d been on the force. In only one of those previous incidents was a weapon involved.

Police union head Mike McCormack, whose absence has been conspicuous during the proceedings, appeared alongside Brauti to turn up the heat for the cameras, warning of the “chilling” effect the verdict would have on officers on the street.

Of course, cops should think hard before using their guns. Except McCormack didn’t mean it that way. He was suggesting cops might stop enforcing the law. It’s called FIDO: Fuck it, drive on. It was all quite predictable, and a bit rich. But cops’ backs are against the wall. The Yatim verdict has changed everything.

As Yatim family lawyer Julian Falconer observed later, “The old days where a police officer went to trial and literally enjoyed immunity are gone. Officer safety has fallen as the ruling calculus when it comes to use of force.”

At police headquarters, Chief Mark Saunders offered encouraging words, “Whenever police take a life, tough questions must be asked and answered. There can be no legitimacy without accountability.”

He promised, in addition to the “significant strides” made on the key recommendations in former justice Frank Iacobucci’s report on the Yatim shooting, “to continue to scour the world for ideas, programs, approaches and techniques that can provide additional protection for those in need.”

But we’ve heard the promise to do better by Saunders before. And most of the recommendations of the Iacobucci report remain words on a piece of paper.