Gardiner of the galaxy

On January 21, 2013, John Tory, then a talk radio host and chair of CivicAction, addressed a small crowd that. 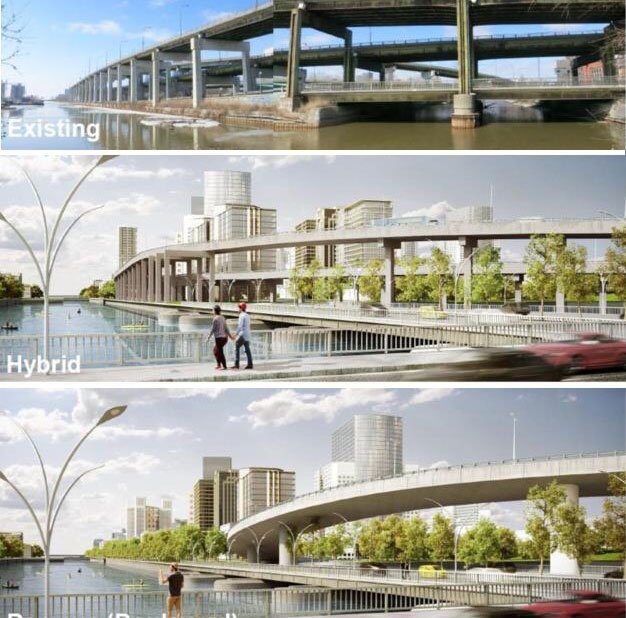 Gardiner east options to be discussed at council June 10 and 11 won't include a report from the city's chief planner. |The Board of Health

On January 21, 2013, John Tory, then a talk radio host and chair of CivicAction, addressed a small crowd that had come to the Duke of York pub to hear him speak about transit.

At one point in the discussion organized by civic engagement group Why Should I Care?, Tory turned to the future of the Gardiner Expressway, explaining that he’d shifted his view that the city couldn’t afford the bill to get rid of it.

“And I’m now thinking to myself, ‘If we’re thinking ahead’ I have two grandchildren now and I’m thinking ahead to their life in this city, which I think of, by the way, as the greatest place in the world in which to live, notwithstanding our flaws ‘then wouldn’t you take an honest look at tearing it down or burying it or whatever?’

“And even if the cost is huge, you’d say to yourself it’s an investment we’re gonna make in something that’s gonna make this a much greater city, and it’s gonna allow transportation generally to be improved,” he said, in a video of the event posted to YouTube (see excerpt below). “We’re gonna have to consider those radical solutions.”

If you ignore his raising the prospect of burying the highway, Tory sounded a bit like the sort of bold, forward-thinking leader that 21st-century cities deserve.

Nearly two and a half years later, however, he’s become the kind of intellectually or politically lazy elected official whose inertia the 2013 Tory seemed to decry. The mayor has now made himself a champion of the status quo willing to spend whatever it takes to rebuild, refurbish and actually add new ramps to the barely used stretch of Gardiner that runs between Jarvis and the DVP, spending hundreds of millions of dollars the city doesn’t have to save 3 per cent of rush-hour commuters a handful of minutes on their trip.

Virtually every expert in every relevant field transportation, planning, public health has advocated that the city take advantage of the opportunity provided by the elevated expressway’s deterioration to replace that portion with a ground-level boulevard that would be vastly cheaper, open up more tracts of land for development, be inviting to those not in cars and save enough money to build much-needed public transit. The mayor has remained unmoved.

The easy conclusion is that Tory would have been an adequate Toronto mayor a decade ago, a decent mayor 20 years ago and a very good mayor 30 years ago, but he’s simply not up to handling the challenges of a rapidly swelling population for which cars can’t be the primary means of transport due to the hard, physical limitations of space. If you’re willing to spend an extra half-billion dollars for the marginal benefit of 5,200 drivers (about $90,000 per person!), at the expense of all others, then your priorities are at best anachronistic.

But even in 1999, the Mel Lastman-led city council voted 44-8 to dismantle the segment of the Gardiner that ran from the DVP to Leslie. (Lastman himself appears to have been absent from the vote).

And as David Crombie, mayor from 1973-78, pointed out at a press conference at City Hall on Monday, June 1, arranged by Deputy Mayor Pam McConnell (whose own views on the subject are contrary to Tory’s), he’s wanted to get rid of the damn thing forever.

“I’ve spent a lifetime, almost, saying we should take down the Gardiner. And people come back and say, ‘Nice for you, David, but it costs money. It costs too much money,'” he said. “Here we are now with the opportunity to complete the job we started a few years ago to take down this portion of the Gardiner, and for double the money people want to rebuild it.

“You judge governments,” he intoned, “by the priorities that they choose.” Crombie endorsed Tory in the 2014 election.

Rebuilding that part of the highway isn’t even the popular option. A Mainstreet Technologies poll that surveyed 2,415 Torontonians on May 28 via interactive voice response found that 45 per cent would prefer tearing down the Gardiner east of Jarvis and replacing it with a boulevard, compared to just 33 per cent who’d prefer a rebuild. (The margin of error is plus or minus 1.99 per cent, 19 times out of 20.) Remarkably, the numbers hardly vary across respondents in Scarborough, North York, Etobicoke and the downtown.

Council is set to decide the roadway’s fate at its June 10-11 meeting, but it looks like proponents of removal may push for a deferral, knowing they don’t yet have the votes [pdf].

“These major choices that we make in the history of a city always tell us an essential truth, and that is: what’s our vision of the future of the city?” said Crombie, who’s almost certainly the most widely respected (and fondly remembered) of those who’ve served as the city’s chief magistrate. He believes that “rebuilding the elevated Gardiner Expressway of 60 years ago is building the city for yesterday,” whereas taking it down and designing a new streetscape is “a plan we could have for the future.”

Paul Bedford, who oversaw council’s decision to remove the section east of the Don when he was chief planner from 1996 to 2004, is perplexed that the Planning department wasn’t asked to weigh in on the latest options. Toronto’s current chief planner, Jennifer Keesmaat, favours removal, as does every other living person whos held the job Stephen McLaughlin (1979-86), Bob Millward (1987-96) and Gary Wright (2008-12) joined Bedford at the press conference.

While politicians often pander to the short-sighted wants of the present, planners as the name of their discipline suggests address the needs of the future.

On Monday afternoon, Councillor Sarah Doucette put forward a motion to the Board of Health asking for Keesmaat to report to next week’s council meeting on the planning implications of both Gardiner options as well as “best practices in similar cities that are pursuing active and healthy city objectives.” The board, stacked with the mayor’s preferred appointees, narrowly adopted her amendment, but they shot down the whole item to which it was attached, killing the request. That item was a report from the medical officer of health explaining that the remove option would have the more positive impact on public health.

In his presentation (the slides for which are at bottom), Bedford showed before-and-after photos of cities that have very successfully removed elevated expressways from their waterfronts, including New York City’s West Side Highway, San Francisco’s Embarcadero Freeway, Portland’s Harbor Drive, Seoul’s Cheonggyecheon and even the Gardiner east of the DVP.

“There are other cities… that had the same debate and decided, ‘Oh no, no, we can’t do it. We’re gonna keep it up,'” he said.

“Know what they are? Buffalo, Rochester, Syracuse and Detroit.”

Met with laughter and cheers, the comment was what you’d call a mic drop, if the mic fell echoing through the vast dark chasm between Toronto’s divergent futures.