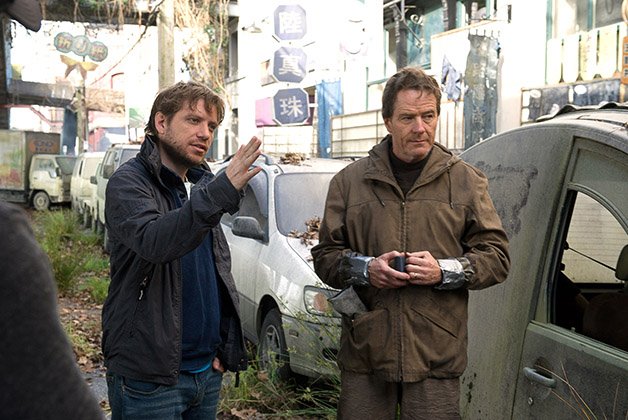 Gareth Edwards dropped into Toronto this week for the red-carpet premiere of Godzilla at Yonge and Dundas. During press interviews, we had an enlightening talk about structure, motivation and kaiju logic. Don’t worry, nothing will be revealed here that isn’t already in the trailers.

The approach you take in Godzilla is similar to that of your first film, Monsters, which keeps the giant-creature stuff on the periphery of the action. It creates a great sense of scale but also goes against the ethos of modern Hollywood, which is all about dazzling people from start to finish. Was it difficult to get the studio to accept a more subtle approach, and move the human characters to the forefront?

I would have thought it worked like that as well, [but] it’s not how it happened. We all sat down, and on day one we talked about films. “What do we want this to be like?” And the movies that were thrown around all the time were Jaws, Close Encounters, Alien, the original King Kong. They all have the same thing in common, which is you don’t really see the main creature until about halfway through the film. They kind of incrementally build to it, hinting and glimpsing it. So that was never a problem.

And as in the most striking scenes in Close Encounters, what Godzilla conveys is not just the terror, but the awe. It’s the sense of overwhelming scale, and human insignificance. Again, not the expected route for a monster movie.

I can’t help it. It’s this sort of strange rebelliousness – like, if someone says “You’ve gotta go do X,” I’m like, “Right, I guess I have to do Y then.” As soon as someone tells you what to do, you don’t want to do it. And making a film is a whole series of choices it’s like a path, a journey you go on, and every time you get to a junction, you go: “Should I go left or right?” You know what the audience is expecting you’re supposed to go left. So the second you feel that, you think, “Well, I have to go right then – at least to explore it, to see what it’s like.”

There’s a thing that happens in the first hour, and the way the movie handles that made me want to cheer, both for its impact and for the sheer audacity of what happens next. And thanks so much for making a Godzilla movie that surprises.

If you came to a film and you got exactly what you were expecting, then there’s no point in going. In theory you’re going to see a film because someone else is in control, and they pull you through this journey. My favourite films always do that. Tarantino does it in spades, where you think you know what’s gonna happen and he throws you a curve. I love that type of storytelling you get excited by it. It’s like a little game, an unwritten agreement you have with the audience that there’s gonna be a bit of cinematic foreplay – you’re gonna get what you came for, but you’re gonna get teased. Hopefully not frustrated, because you’ll leave happy, but we’ll definitely keep you on edge before it’s over.

How did you find the structure of the human storyline, which circles around a family divided – more than once – by giant-monster chaos?

You’re always trying to look for, like, “What’s the framework? What’s the skeleton of the movie?” It took us a year and a half to find something that we could all feel was the right thing. You want a global story – in our movie, you’ve got more than one [threat] – and it’s like a sculpture that reveals itself [as] you’re chipping away in the rock. I didn’t want a superhero character [for the lead, Ford Brody], you want a normal person. And family became kind of the go-to choice, especially since we knew in our film we had to have this 15-year gap. We knew we had a story that would have a prologue to it, and then we would [cut to] present-day. So you think, “Well, the child is gonna be a different actor, so the only connection, really, is that it’s the same family.” It’s all that Spielberg stuff.

In our early versions, the family was more dysfunctional. They weren’t getting along so well, because [Ford] was away from home with his military postings and stuff. We got rid of that because it just distracted from the film and you wanted to root for them. I mean, it’s one of those things where we’d literally, like a chess game, tried every move – you know, if someone goes, “Why’d you do that and not this?” I can go, “I can show you that version.” And through sheer trial and error, and force of will, this became the one that felt like the strongest way to go.

Is that how you built the monster mythology as well? Some fairly complicated ideas about where Godzilla comes from and what he’s here to do are expressed almost entirely visually.

Our big fear, for a long time, was that it was too complicated. In early drafts [the backstory] just felt too complicated, [and] people don’t want this kind of complexity. So we reduced it and reduced it, and the thing that really saved us was the projection scene. It was called Scene 97 it’s the only scene number I remember, because I talked about it so often. [Characters] basically tell the backstory of Godzilla, and it’s like a five-minute scene. It’s just pure exposition, but I really enjoyed filming it because it’s got all those qualities from those movies like JFK and Jurassic Park – smoky rooms and archives and conspiratorial conversations.

And you set it up in the opening titles, which show us a montage of unsettling military footage and credits emerging from blocks of redacted text.

Yeah, that was Kyle Cooper. I used to do title sequences for a living, and he was my hero. That was actually a sequence we filmed for the beginning of the movie, which we called Bikini Atoll – we had to get the film shorter and shorter, so we took that sequence out. And I always missed it, and eventually it was like, “Well, maybe we should do a title sequence that incorporates this.” And we invited Kyle in, and we talked about that sort of archive prologue thing. I don’t recall who came up with the redaction – I’m sure it was Kyle – but it just felt like something I haven’t seen in a film, where you use redaction to bring up the actors’ names and things like that. It felt really good.

Yeah, I thought that was a beautiful touch. I can read fairly quickly, and I noticed a few interesting things in what we’re allowed to see.