Gay refugees get a new lease on life through Rainbow Railroad

Toronto non-profit lifts at-risk LGBTQ people out of danger to countries where they can live openly. “It’s hard to actually plan a life when you don’t know what’s going to happen to you.” 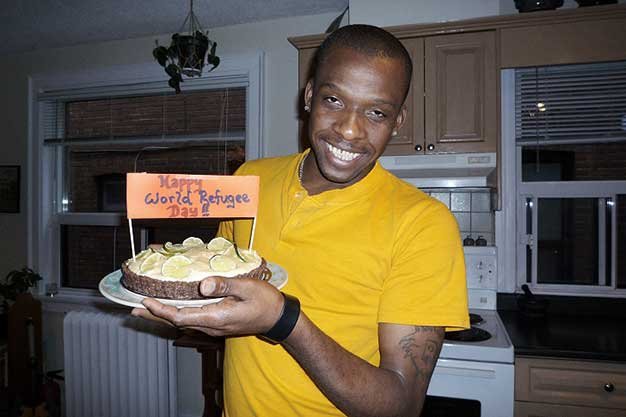 Rolston Ryan got out of St. Kitts and Nevis in May 2013 with help from Rainbow Railroad.

Around the same time that newly sworn Prime Minister Justin Trudeau was vacationing in St. Kitts and Nevis with his family in early January, a 31-year-old gay man from the Caribbean island nation was making headlines of his own back home and in Toronto.

Rolston Ryan, who had sought asylum in Canada because of St. Kitts’s anti-LGBTQ laws, faced deportation back to his native country after several failed applications for refugee status to the Immigration and Refugee Board. In April, Ryan was told that his case would be reconsidered by the Refugee Appeal Division. He’s currently living in Toronto, awaiting a final decision.

Ryan got out of St. Kitts in May 2013 with the help of Toronto-based Rainbow Railroad. The volunteer-run group had just received non-profit status and was in the process of hiring its first employee, executive director Justin Taylor.

Inspired by the Underground Railroad that helped African-American slaves flee to safety, Rainbow Railroad lifts at-risk LGBTQ people out of danger to countries where they are able to live openly.

“The analogy I use is an ambulance. We help people get out of immediate risk to a safer place where they can claim asylum,” Taylor explains. “Ambulance drivers don’t necessarily make sure you have your surgery they just get you to the hospital. That’s what we do: we get people to the hospital.”

In one way or another, Taylor has had a hand in helping hundreds of gay, lesbian and transgender people from around the world find safety. In 2015, the organization received 235 calls for help from individuals in more than 70 countries and was able to offer financial assistance for travel to 29 of them. Another 48 people received information, connections and resources.

“We’ve got cases where the turnaround time has been three or four days before we can help, and in others it’s been 18 months and we still haven’t been able to get them to safety,” says Taylor. “Once we verify [their case], then we work with them to develop their own personal route to safety.”

No two cases are the same. Factors such as passports, visas, the ability to travel to the U.S. and the asylum process once a person arrives in a new country all go into determining where he or she ends up and how long it takes to get there.

“You can imagine trying to get travel documents for someone who is homeless, who has never left the country or never had a job,” Taylor says. “It’s a lot harder than someone who is university-educated and an activist.”

In Ryan’s case, he was working as a professional dancer in St. Kitts, had a passport and had travelled to the U.S. in the past to perform in shows. Quite quickly, Rainbow Railroad was able to send him a plane ticket.

“I was told the night before,” Ryan recalls. “I wasn’t sure what I was going to tell my family or my dance company.”

Ryan says he knew it might be his only chance to live freely as a gay man. According to the Refugee Board, St. Kitts’s health ministry has described homophobia as rampant and the country’s criminal code prescribes up to 10 years in prison, with hard labour, for “the abominable crime of buggery.” Growing up in St. Kitts, Ryan says he was constantly tormented about his sexuality.

“At home, all my family members always called me ‘girl’ and ‘anti-man,’ stuff like that. It all started from there,” he says.

Then one night, after hanging out with friends, he was beaten and stabbed by two men on his way home, according to his testimony before the Refugee Board. He spent a week in the hospital recovering, yet he says police never investigated.

Ryan says he was stabbed on another occasion and that time was able to walk to the police station to file a report.

“They said they’d look into it, but they never contacted me. When it came time for my [refugee] hearing, there was no evidence that I ever went to the police,” he says.

So he couldn’t believe it when he arrived in Toronto and saw two men holding hands downtown. He rushed home to tell Joel Dick and Dara Douma, who had opened their Beaches home to Ryan after hearing about his case. The Toronto couple was matched with Ryan through the Metropolitan Community Church of Toronto, one of several Rainbow Railroad partners.

“People kept telling me, ‘This is Canada – you can do whatever you want,’” Ryan says. “Of course, everywhere in the world there are homophobic people, but until I moved here I never experienced being able to freely go to restaurants or movies with a partner or good friends and have nobody look at you or say anything to you. It felt really good.”

After living with Dick and Douma for five months, Ryan moved to an apartment near the Danforth, and has worked at a commercial bakery for nearly a year. He wants to get back into dancing and dreams of becoming a Canadian citizen one day, but right now he’s focused on receiving permission to stay.

Rainbow Railroad is hopeful. Recent success stories include the case of two HIV-positive lesbian women who fled Jamaica for Canada last May. The group also helped a young gay activist from Cameroon reunite with his boyfriend in the U.S. in October.

Taylor says the group has traditionally dealt with individuals from the Caribbean, with help from the Jamaica Forum of Lesbians, All-Sexuals and Gays, but over the last year has expanded operations to focus on the Middle East and South and Central Asia.

For Ryan, celebrations like ongoing Pride Month events in Toronto help make it okay to be yourself.

“It’s hard to actually plan a life when you don’t know what’s going to happen to you,” he says.