Fancy a scoop of porcini, truffle or cricket gelato?

Sound gross? Not in the capable hands of Death in Venice Gelato 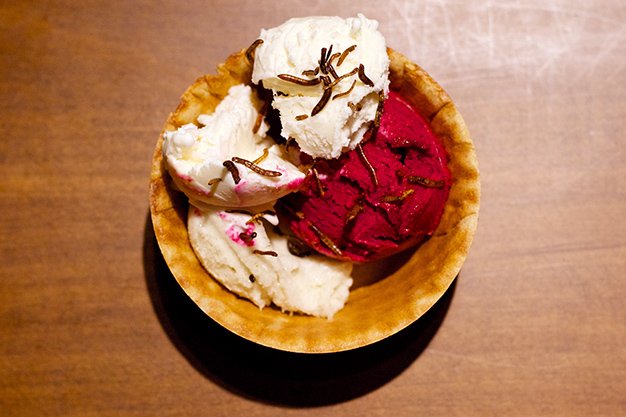 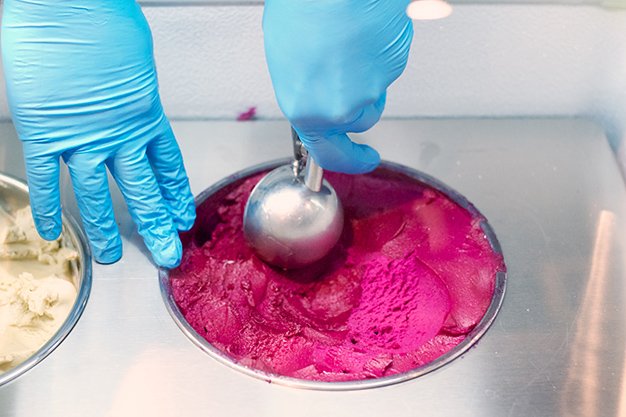 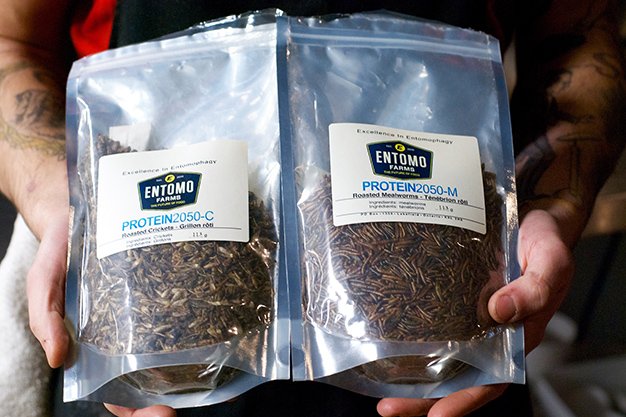 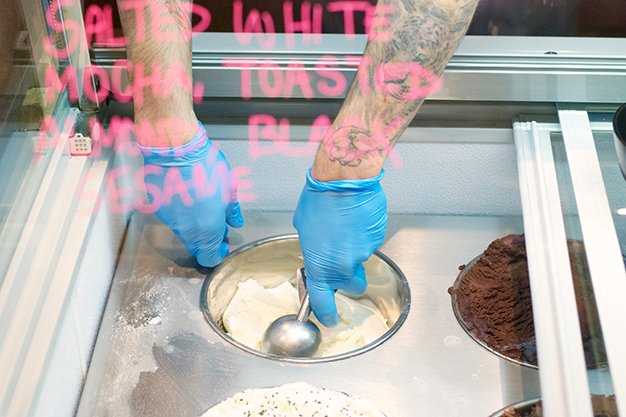 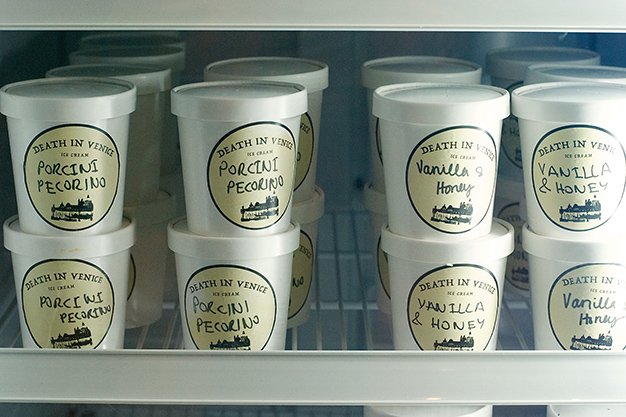 “Porcini and pecorino.” The minute I saw these words Sharpied onto the side of a white cardboard pint at Constantinople Bakery, I was already sold.

My reasoning: If you were bold enough to take what most people would see as a set of pizza toppings, turn it into a frosty dessert, and sell it by the pint, you must really know what you’re doing.

Kaya Ogruce is the man behind Death In Venice Gelato (see listing), a brand-new outfit that recently began operating out of the back of Constantinople.

“The idea is to have a gelato business that goes with the seasons,” he says. “I kind of use whatever’s around, whatever milk I can get, and products that are quite sustainable.”

By Ogruce’s own admission, those buzzwords have all but lost their potency everywhere else in the restaurant industry – but in the world of ice cream, when “seasonality” basically translates to zero scoops sold between September and March, his approach is rare. The result: Flavours like maple-roasted parsnip, beet with cardamom and rosewater, and marsala-tiramisu.

A former chemical engineer, Ogruce began cooking in 2009 and found himself working in Michelin-starred restaurants in France and San Francisco. He currently balances teaching duties at the Stratford Chefs School with a newfound calling to reinvent the classic Italian ice.

“I had one of those cheesy moments where we were in Sicily, on a motorcycle, on top of Mount Etna,” he says of his eureka moment. “We were having this fantastic pistachio gelato, and I said, ‘I want to do this for a living. This is just too good.’” 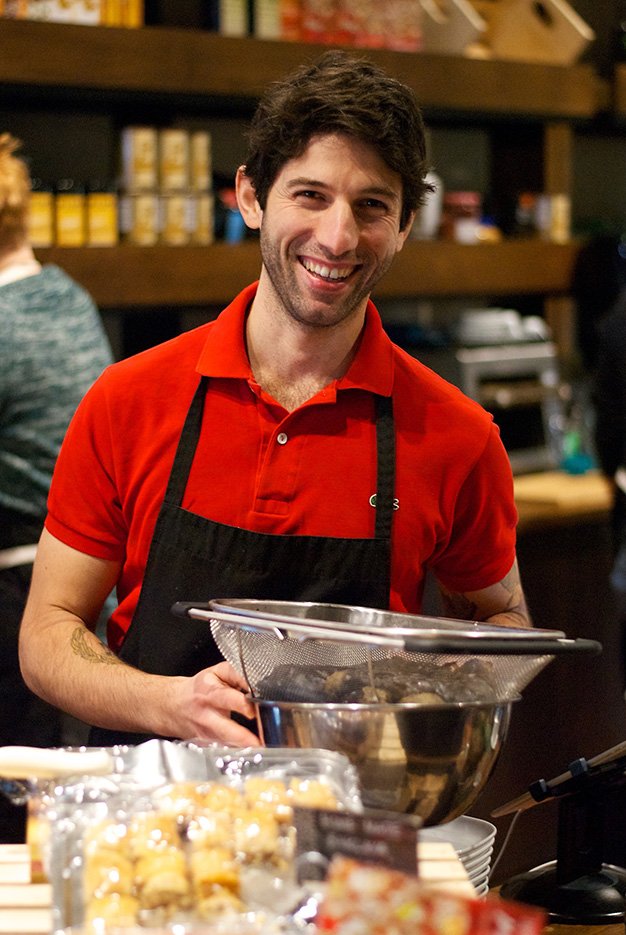 Kaya Ogruce shows off some roasted eggplant destined for a new gelato flavour.

It might be easy to assume that shock value is the driving force behind Ogruce’s flavours, but he sees his combinations as simple, logical extensions of classic ingredient pairings (yes, even the dried anchovy garnish on his pecorino-porcini flavour).

“I, as a chef, am not a huge fan of sweet things. For me, sweetness should be paired either with acidity or with salt,” he says. “In restaurants, when we did things that were tasting-menu oriented, there was nothing worse than a heavy dessert after 14 courses. That doesn’t make a lot of sense.

“For me, dark chocolate and olives makes a lot of sense,” he continues. “Chocolate likes salt. Olives are brined and salty. We use Moroccan olives that have a little sweetness to them. We combine it with the chocolate. It’s fantastic.”

His analogue to a salted caramel is a flavour that combines honey with barnyard hay. “I get organic hay from Perth County and roast the hay first, so you get that ‘barn-y’ flavour.” He does his hay roasting on Mondays the barnyard smell had the rest of the kitchen staff complaining. “We soak it in milk, and after three days I squeeze out all the – I call it ‘hay milk’ – and you make a salted honey gelato.”

The result is surprisingly accessible, with plenty of salt up front and a lingering grassy finish, but hay isn’t Ogruce’s weirdest ingredient, by a long shot – he has edible mealworms and crickets on hand for use in future blends. “They’re organic and GMO-free!” he says proudly. Eventually, he’s planning to use ground cricket flour as a stand-in for thickening skim milk powder.

Turkish coffee gelato is heaven for those who don’t like to Frappucino-ify their brew – Ogruce adds just enough sweetness to leave bitter flavours intact, with the left-in grounds delivering crunch and grit. My fave of the day might be a truffle, honey and rosemary flavour. Each ingredient hits you in sequence: First a pleasing honey overtone, then a sinus-filling wallop of truffle flavour that’s eased out by the rosemary. It’s instantly addictive.

Has he managed to win Queen St. shoppers over to mushroom gelato? “The reaction’s been positive – I’m kind of swamped with work now,” he says.

Leslieville’s Pizza Thick is dumping their tubs of Kawartha Dairy for Ogruce’s product (look for “safer” flavours, like white chocolate mocha, for the kids). He’s also doing chef collabs: “You know Francesco Alejandri, from Agave Y Aguacate? He’s coming over in half an hour. We’re going to try to make a mole gelato.”

Also on deck is a novel subscription model. For $40 a month, they’ll deliver four pints to your door: one chocolate, two seasonal gelati, and one sorbetto.

“I really enjoy doing this, because when I was a chef, I had to have six people in the kitchen to do something creative. It was so much effort. Doing this, I can just be a one-man show and do some interesting things.”