George Lakoff: firing up the left

Famous cognitive linguist and political theorist tells $1,000-a-head confab that all politics is moral – and that demonizing Harper is not the way to beat him 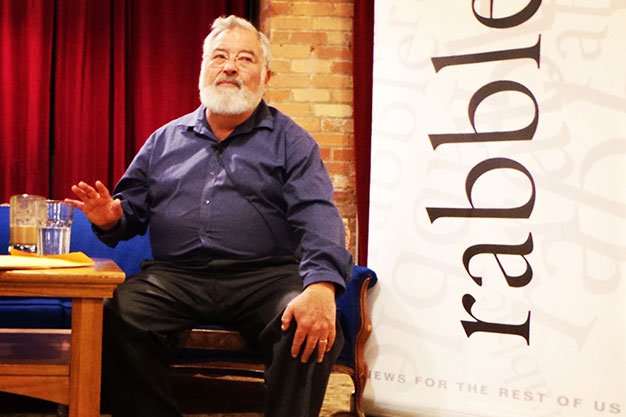 “No candidate for office and no politician gets up there and says, ‘Here’s what we should do because it’s wrong it’s evil, but do it,’” George Lakoff tells the crowd. He explains that political decisions draw credibility from their implicit moral rightness.

And whether the comment is a weak joke or genuine suggestion of prime-ministerial malevolence, Hollett leaves herself open to being corrected by Lakoff, the famous cognitive linguist and political theorist.

No, he says, “I think he thinks it’s right, given his moral system. Given his understanding of the world. And I think serious conservative politicians really believe that their moral system is right.”

All politics, he affirms, is moral.

On its face, it’s not an especially innovative thesis. But Lakoff’s cleverness – and the reason, presumably, that a hundred people have paid roughly $1,000 each to see the UC Berkeley professor headline this April 18 workshop on progressive political organizing – is that he grounds his concepts in the neurology of thought and language, his primary area of expertise. (For his near-identical talk at the Bloor Street United Church that evening, tickets were a more reasonable $20.)

Many in attendance at rabble.ca’s Inspiring To Win conference at the Centre for Social Innovation Annex are here on behalf of unions and other NDP-ish institutions that hope to topple the Conservatives in the upcoming federal election. The group is largely white and largely older, which could be explained by the admission price, if those who showed up to the evening lecture weren’t more or less the same.

Before becoming renowned for efforts to impart strategic wisdom to the left, Lakoff was a staple of first-year semiotics classes for his contention that human thought is filtered through the conceptual metaphors we unconsciously deploy. Babies, for example, quickly learn to associate verticality with quantity, such that up means “more” and down means “less.”

He argues that a person’s politics are profoundly informed by the moral systems they unconsciously registered while being raised. Progressive values derive from a “nurturing-parent” model of the family, in which emphasis is placed on empathy, caring and a responsibility for others. Conservative values, on the other hand, emerge from a “strict-father” family, where morality and obedience are enforced through physical discipline that becomes internalized as a capacity to do what you think is right rather than what feels good.

This, he says, is achieved through language, communication and the shaping of public discourse.

In another of his broad generalities, Lakoff observes that while many progressives study political science, public policy and the humanities at university, conservatives are more likely to take business. So while left-wingers learn logic and Enlightenment reason, right-wingers become versed in the marketing strategies that grasp how the brain actually works.

In a spring 2010 Playboy feature, Rogues Of K Street: Confessions Of A Tea Party Consultant, an anonymous Washington operative explained his or her techniques: “We’re playing to the reptilian brain rather than the logic centres, so we look for key words and images to leverage the intense rage and anxiety of white working-class conservatives. In other words, I talk to the same part of your brain that causes road rage. [Two-time anti-establishment presidential candidate] Ross Perot’s big mistake was his failure to connect his pie charts with the primordial brain.”

Facts, truth and rationality, while deeply important, can only get you so far in countering that.

In April 2011, five months before the occupation of Wall Street, the late Roger Ebert wrote a blog post named The One-Percenters. The film critic raged against income inequality and the obscene excesses of the upper-upper-class, and wondered why the most prominent populist movement of the time was one that advocated against its own interests.

“Why do middle- and lower-class Tea Party members not understand that they bear an unfair burden of taxes that should be more fairly distributed” to large corporations, many of which pay little or no tax? he wondered. “Why do they support those who campaign against unions and a higher minimum wage? What do they think is in it for them?”

One common answer to the question is that working-class people believe that they too might one day get rich and so support policies that would benefit them in such a hypothetical future.

But of course, “this is crap and has been crap for a very long time,” Christopher Bird wrote on his blog in response. “It rests on the assumption that poor people are stupid and don’t realize how unlikely they are to become rich.”

“Instead,” the family law lawyer and long-time Torontoist contributor argued, “I think it’s generally because the elites who want these policies enacted have very successfully communicated their ideas in terms of basic fairness,” e.g., “It’s not fair that I worked hard for all this money and when I die I have to pay estate taxes and my children won’t get everything they deserve,” and “It’s not fair that I should pay a higher income tax rate than someone else just because I make more money.”

People, on the whole, want to do the right thing. They value goodness, justice and morality. It’s the meanings and applications of those concepts that are malleable.

“That these positions are frequently disingenuous is beside the point,” Bird concluded. “The point was to make these terribly unfair policies appear fair, because the voters who come out to support them really do value the concept of fairness more often than not, and if you can demonstrate that a policy they support is basically not fair, then gradually they will change their minds.”

Councillors Shelley Carroll and Mike Layton are big fans of Lakoff they spend all day at the conference, then see him again at the church that night.

Carroll says that at one point she had 12 copies of Don’t Think Of An Elephant! – Lakoff’s best-known book – and gave them all away. Layton once ordered 15 used copies of Thinking Points and did the same, with at least 10 ending up in the hands of other councillors and their staff.

The relevance to City Hall is evident. When Lakoff describes how people react to facts that don’t fit their preconceptions by ignoring, changing, laughing at or attacking that information, you can practically hear Rob Ford loudly insist that LRTs “tear up” streets while Josh Matlow valiantly attempts to explain to him otherwise.

The title of Elephant! is a thought experiment showing that to negate a premise is to reinforce it. That is, told not to think of an elephant, you will necessarily think of an elephant. And when you engage in an argument on your opponent’s terms, you effectively strengthen their point.

Lakoff advocates that progressives reject the premise of any question or debate framed in a way that gives conservatives an edge. As an example, he offers “Are you for or against tax relief?” which implies that taxes are an affliction from which one should be relieved. (The word “tax” itself, he believes, is problematic because it’s associated with the adjective “taxing.”)

Councillor Carroll (Ward 33, Don Valley East) says she successfully sold her North York constituents on the need for new taxes. And rather than accomplishing this through an explanation of budget figures, she told them that new revenue tools are necessary because it’s “fundamentally and morally wrong” to build an entire city’s infrastructure atop the property tax base, “by extracting dollars from a senior citizen who through no fault of their own now lives in a home that’s worth a million dollars.”

Two days prior to the conference, Carroll was one of two members of the Toronto Police Services Board to reject a revised carding policy that effectively keeps in place the police practice of disproportionately stopping and documenting young black and brown men as they walk and drive through the city.

Asked how Lakoff’s theories might apply to that issue, Carroll suggests that for too long the formal debate around carding had been bogged down in the fine points of the policy rather than in affirming the inherent wrongness of the exercise. “As soon as you start arguing process, you’ve lost.

“Fundamentally, morally, it is just not okay to go into a neighbourhood and decide that here in this neighbourhood, I need to know every young person’s exact name and their parents’ marital status and who their friends are. But when I get over to Don Mills, I don’t need to know that any more,” she says, describing the practice in terms of its core injustice.

The police board didn’t typically discuss carding in those terms or with such clarity, despite hearing from countless members of the public who did. Even the Toronto Star investigations that established the nature of the issue in the first place tended to foreground the statistics.

On Tuesday, April 21, Toronto Life published a memoir by Desmond Cole that outlines his personal history as a black man who has been stopped and questioned by police on more than 50 different occasions (despite never actually having run afoul of the law). Rather than burrowing into policies and figures, Cole simply recounts his own experiences, one after another, tracking the vector of his life. The cumulative effect is emotionally exhausting, on him and the reader. The piece triggers a level of personal identification and empathy that transcends conventional advocacy journalism. Rather than an intellectual “this is wrong,” it provokes a visceral “this is wrong.” It’s not so much about carding being evil it’s about the people it affects being good.

In some ways, that’s the essence of forging a path to political change.