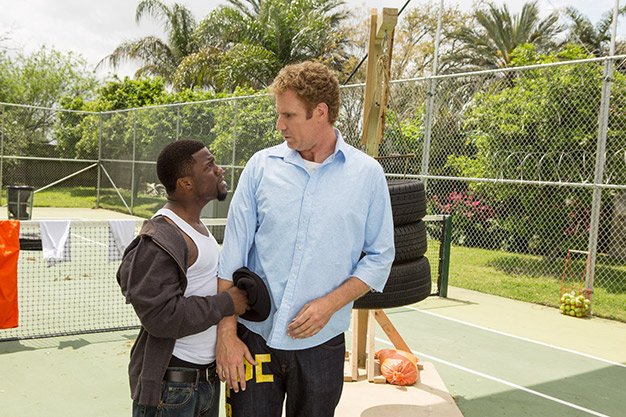 There are ideas in Get Hard. Actual ideas. Under all the shouting and ass play and borderline minstrelsy of its black and gay characters, this is a movie that wants us to think about stuff, at least for a minute or two.

Stuff like the ritualized use of underlings as fall guys in corporate scandals, matters of race and class in contemporary America and the bred-in-the-bone privilege that leads successful white people to believe they pulled themselves up by their own bootstraps, never acknowledging that the boots themselves are made of the finest materials and were a gift from Daddy.

Those ideas are strong, and volatile, and worth exploring. And there are moments when this movie – the latest goofball comedy from Will Ferrell and Adam McKay’s Gary Sanchez Productions shingle – comes very close to engaging with those ideas. But you know what they say about paving the road to hell.

Because, ultimately, Get Hard is more interested in getting bros to snort at the awkwardness of Ferrell’s straight, square James King – a financial wizard framed for insider trading and facing 10 years’ hard time in San Quentin – psyching himself up to blow a guy in a men’s room. It’s more interested in co-opting Kevin Hart’s audience so they can watch the diminutive stand-up comic tell the towering Ferrell it’s okay to speak the N-word aloud, and even coach him through doing so, only to reflexively punch him in the face for it and apologize for that.

Okay, that’s actually the one moment that’s funny, but it’s built on such a shaky foundation that the laugh doesn’t land nearly as well as it should. This is your basic buddy comedy about an innocent dork learning to be cool at the hands of a more experienced player, and that’s sort of the problem. Get Hard hedges its bets from the word go.

Ferrell’s King isn’t actually racist, classist or homophobic, any of the things he’s required to transcend over the course of the picture. (It’s made clear fairly early on that he’s not even guilty of the crimes for which he’s going to prison he’s just too trusting to realize who’s setting him up.)

He’s simply oblivious, and jumps to the easiest conclusion about people, which is how he ends up hiring Hart’s Darnell, who runs the car wash in King’s firm’s parking garage, to teach him how to walk the walk of a stone killer. (He assumes Darnell has been in prison “because statistically one out of every three African-American men will go to jail at some point in his life” – and Darnell, who needs some quick cash to move his family to a better neighbourhood, strings him along, offering a crash course in prison skills.

And this is where Get Hard stumbles further, filling a good hour with nonsensical tests and simulations in which Darnell humiliates King over and over again and King goes along with it because he doesn’t know any better.

You’d think that would be fun, because as a performer Ferrell is never happier than when he’s debasing himself and shouting absurdities. But the jokes don’t land. It’s simply no fun to watch this sweet-natured idiot suffer.

This is a movie that really wants you to think about some ugly realities, but it doesn’t have the balls to make its bad guy genuinely bad.