Get intimate and interactive at Torontos Festival of House Culture 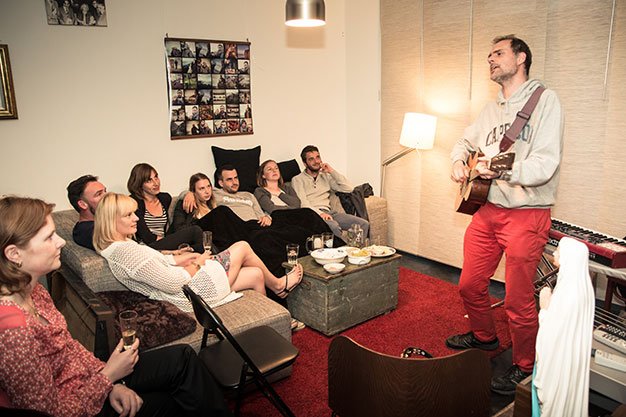 Theres a word in the Danish language that helps Danes get through their long, dark winters. Hygge is difficult to define theres no English equivalent but in essence it means a feeling of coziness. Its the concept of creating a warm, inviting atmosphere, often at home, and sharing the simple joys of life with other people.

For one week starting on November 20, Torontonians are encouraged to experience hygge during the Festival of House Culture. Now in its third year, it features concerts in all genres, workshops, conversations and meals in peoples homes across the city.

Holt, who founded the festival with Marcel Aucoin, played his first house concert in the 1980s, though he didnt know it was a thing at the time. It was when he was on tour in Europe in 2010 that he began seriously considering it as an alternative to traditional live music venues. He recalls performing at a bar in Belgium and vying for the attention of drunk, chatty patrons.

There was no shared focus, and I was basically struggling to get people to engage with what I was doing. I found it so alienating and dissatisfying, I told myself, Im not doing this any more, Holt says. On that tour, I had a few house concerts, and the contrast was so stark. That culture immediately provided what I was looking for, so now I pretty much exclusively play them.

In Toronto, the popularity of house concerts has been growing partly because of the lack of all-ages venues and the rising costs of producing shows. Holt sees an increasing desire to make deeper, more authentic connections with people as another motive.

This is something that makes sense in our world now, when everybody is on screens all the time and engaging in culture in very technologically oriented and depersonalized ways. Were losing touch with community and not doing as much together as we used to, he says.

For artists and musicians, house concerts provide a novel performance environment. Most of the time, the audience sits on chairs or on the floor in a semi-circle around the artist rather than in rows at a distance from the stage. Holt says that informal set-up encourages greater intimacy and participation.

Its much more interactive, he explains. When I started playing house concerts, I very quickly gave up set lists because I found it was much better to let that evolve in conversation with the audience. Id play a song that reminded someone about a time, and wed talk about it. Then that would remind me of another song to play.

Microphones, monitors and amps are discouraged. All that interferes with intimacy, Holt adds. Without a microphone between you and the audience, its a much more direct connection.

From a financial perspective, a lot less promotion is needed to fill homes, and audiences are often willing to pay more for intimate, one-of-a-kind experiences. And because people arent spending additional money on alcohol attendees are encouraged to bring a bottle of wine to share theyre more likely to support the artist by purchasing merchandise.

When I started playing house concerts, thats when financially things started taking off for me. The tours suddenly started making money, Holt says. House tours also offer you a place to sleep and eat. Its very personal, comfortable and cozy, a much nicer environment than being in a rock club or festival.

The Festival of House Cultures 30-plus curated events include an international vegetarian potluck supper with live sitar music in the Junction (November 20), a shadow puppet workshop in Roncesvalles (November 24) and a jazzy art rock house concert in Woodbine Heights (November 27). Holt will play piano at an event in Deer Park called Let Them Eat Cake on November 26.

Its a knitting party with live music, some Charles Dickens readings and cake, he explains. The price of that event is a $10 suggested donation, and many events are pay-what-you-can.

Additionally, the fests organizers are encouraging members of the public to create their own events at home this year. You can choose different levels of privacy, from friends-only to open-to-neighhours to open-to-the-public. The deadline for submitting a proposal to housecultureTO@gmail.com is Monday (November 14).