Gett: The Trial Of Viviane Amsalem 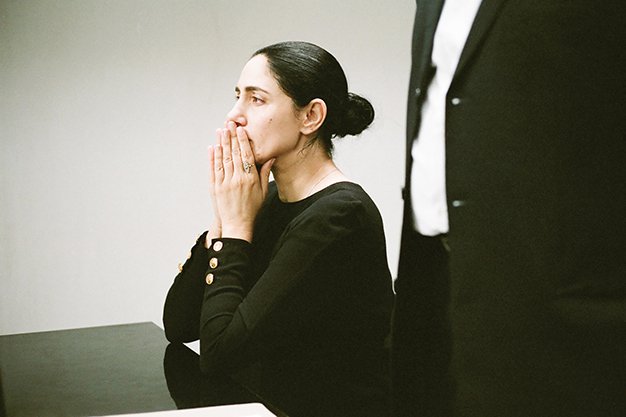 Ronit Elkabetz is magnificent as a woman divorcing her Orthodox Jewish husband.

Gett: The Trial Of Viviane Amsalem takes place entirely within a sterile rabbinic courtroom, where a divorce hearing drags on for more than five years. The set-up can make things frustratingly constrictive and redundant, but that’s the point.

The film is no more exasperating than the rigid, patriarchal legal system it depicts. That Gett remains engaging, heart-wrenching and absurdly comical is a testament to the filmmakers’ skill.

Ronit Elkabetz (the film’s co-writer and -director with brother Shlomi) plays Viviane, the wife filing for divorce from her devoutly Orthodox and emotionally distant husband, Elisha (Simon Abkarian). According to Jewish law, a couple cannot end their relationship unless the husband grants his wife a divorce, or gett. Elisha repeatedly refuses to do so, motivated by stubbornness, hurt pride and vengefulness.

The rabbi presiding over the trial can’t find grounds to force the divorce, since Elisha is not physically abusive or an adulterer. An unhappy marriage, recounted through colourful witness testimony, is not sufficient.

This is a film that lives and dies by its cast, and the ensemble is stellar, particularly Elkabetz. She subtly conveys Viviane’s warmth, passion and sensuality, all tragically hemmed in by the dark, buttoned-up garb, hair ties and frown imposed upon her.