Getting crafty about beer 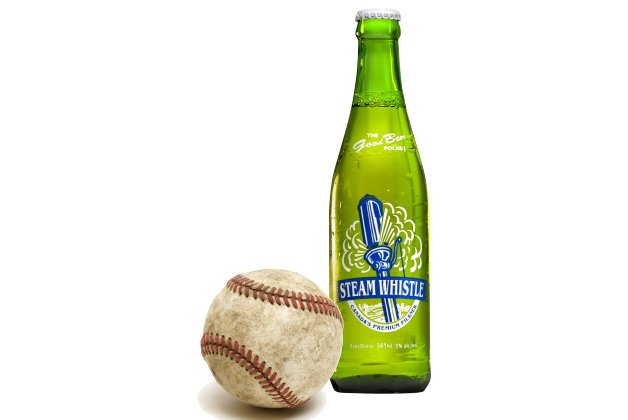 He’s bitter, to be sure. He’s indignant and he’s frustrated, but Phil Cacace still made his way to the Blue Jays’ home opener on April 4.

When news spread in March that the Rogers Centre’s only Canadian-owned beer supplier was no longer welcome, Cacace launched an online petition imploring the Jays to show some love for local brewers.

A few weeks into his campaign to shame Canada’s lone major league baseball franchise for cutting ties with craft beer, Cacace remains deeply loyal to the his home team.

“I feel like it’s my birthright to cheer for the Jays,” says Cacace.

“I was dry,” he recalls of watching that game. “Before and after, I was at Steam Whistle, but I didn’t buy a drink at the game.”

Since opening Tallboys Craft Beer House in 2012, Cacace has been passionate about pairing this province’s brews – 70 labels, all Ontario-crafted – with baseball. He organizes two beer league softball clubs and sponsors Pitch Talks, “TED Talks with grass stains” in support of the Jays Care Foundation, which helps kids play ball.

Inside Tallboys’ 838 Bloor West location, Jays games fill the screens, and sometimes you can even hear the audio over Cacace barking about Jays pitcher Drew Hutchison’s disappointing start or Yankees’ pitcher CC Sabathia’s waistline. The man is not a casual fan.

“Deep down, it’s so infuriating. This is a team that should be an example to other businesses. People wear their colours everywhere. They should be leaders. Where’s the support from the Jays to us as a city?” he asks, referring to the Jays’ dropping Steam Whistle.

The petition generated write-ups and radio play, TV and Twitter fame while directing some unflattering attention toward the Blue Jays. “I feel responsible for CBC asking [Jays president and CEO Paul] Beeston, point blank about it,” the 29-year-old barman boasts.

That may be the most interesting development.

Less than two weeks before the start of the regular season, Steam Whistle was informed it could keep its kegs on the other side of Bremner Boulevard.

A Rogers Centre rookie in 2013 (after years of tryouts), the neighbourhood brewery, which had occupied a lone concession on the 100 level, had done something so heinous, committed a crime so egregious, that it couldn’t – just could not – return for 2014.

What was Steam Whistle’s offence?

The brewery’s communications director, Sybil Taylor, confesses that it “tweeted a couple of times in the first week of the 2013 season” in reply to fans asking where to find Steam Whistle inside the cavernous 50,000-seat stadium. The brewer was “told by the Rogers Centre to cease that activity,” and it did.

Steam Whistle’s contract forbade it to advertise any sort of association with the ball club. The company was aware of this but thought it had clearance from “some junior staff at the Dome that social media was fair game.”

So why did it take Rogers 11 months to inform Steam Whistle that it was being evicted? Was it really just about the tweets? A message left for the Jays’ communications department by NOW went unanswered.

The Jays CEO told Galloway that sponsorships and corporate dollars afford “a level of exclusivity.” This year the ball park decided to brand the games with Budweiser.

Some history to put Beeston’s comments in context: When European mega-brewer Interbrew purchased Labatt in 1995, the goal was to get North American distribution for its portfolio – most notably Stella Artois. Controlled then by two Belgian aristocrats, the mega-brewer also picked up a controlling interest in the Blue Jays as part of its Canadian acquisition.

Today, after mergers and acquisitions including one with the maker of Budweiser, Interbrew has become Anheuser-Busch InBev, the world’s largest beer company. Although ABI no longer has an ownership interest in the Jays, it’s still a major sponsor of the team. The now Brazilian-Belgian conglomerate provides most of the stadium’s suds.

Budweiser’s public relations firm gave me a number for Labatt’s communications people. That took me to the voice mail for someone who was on maternity leave until some time in 2015.

I finally got an email through to someone who could reply to my five questions about Steam Whistle’s dismissal. “Best to direct your questions to the Blue Jays on this one” was her reply. My follow-up was duly ignored.

I’ve lived most of my life in southern Ontario, so I’m not surprised when a Toronto professional sports franchise brushes off media and fans (even those who have supportively donned blue polyester since Roy Howell occupied third base).

Considering that Interbrew stripped Jays fans of hope and the team of its dignity by slashing 40 per cent of the club’s payroll two years after it won back-to-back World Series championships, its reluctance to comment is predictable.

“Steam Whistle would absolutely love to have our beer back in the Rogers Centre someday,” says Taylor.

As for Cacace, he’s also looking to the future, appealing to fans to support his petition in greater numbers.

“I see it happening,” he declares while fist-pumping in tribute to Jays outfielder Melky Cabrera’s third homer of the young season. “The craft beer movement is just getting too big to be ignored.”

The petition is available online at change.org and had 2,002 signatures at the time of writing.