GHOSTS by Henrik Ibsen, adapted and directed by Morris Panych (Soulpepper). At the Young Centre (55 Mill). Runs in rep. 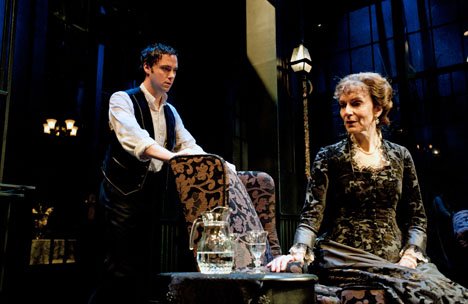 The haunting spirits in Ibsen’s powerful tragedy Ghosts don’t clank around in cobweb-filled corridors they lie hidden in a family’s history and blood.

Rejected as obscene when it was first produced in the 1880s, this play of secrets and lies follows the fortunes of the Alving family. Son Oswald (Gregory Prest), an artist, has just returned to the family’s grand but gloomy house his widowed and devoted mother (Nancy Palk) is delighted to have him home.

But he brings a secret to a house where no one admits to the truth, a secret that, paired with other revelations, will devastate everyone, including the family servant, Regina (Michelle Monteith), her father, Engstrand (Diego Matamoros) and Pastor Manders (Joseph Ziegler), Mrs Alving’s spiritual and financial advisor.

Manders has come for the opening of an orphanage dedicated to the late Captain Alving, a man who character is revealed over the course of the play. The others have their own agendas and manipulate to get what they want, be it money, comfort or solace.

To offer much more plot would be unfair Ibsen carefully reveals narrative details that build to a distressing climax.

This is a work that could shift into heavy-handed melodrama, but under director Morris Panych (who also adapted the script), it’s almost note perfect. The actors are often soft-spoken, their tone matching the gentle fog and rain outside the house and the muted colour palette of designers Ken MacDonald (set), Dana Osborne (costume) and Alan Brodie (lighting). Thomas Ryder Payne’s subtle but regular use of church bells reminds us that religion is iron-rod stiff and commanding in this often hypocritical world.

All five actors dive into their rich roles. Monteith’s flirtatious Regina, dreaming of future happiness Matamoros’s reprobate Engstrand, using sophistry and tears in equal measure to get his way and Ziegler’s brusque, conservative Manders, concerned about his own good image in the community and not above twisting the facts to secure it, are all memorable.

But the play centres on mother and son Palk and Prest grow slowly and impressively into unforgettable figures. Palk’s slyly ironic Mrs Alving dotes on her newly returned child, willing to do anything to keep him home and make him happy. Prest begins as a reticent prodigal son, testy about having been sent away as a child now a modern man, he resents Manders’ narrow view of the world. This Oswald grows in strength and desperation as his options narrow.

The last scene, both a confrontation and a bonding between parent and child, is one of the most devastating curtains in theatre. The chemistry between Prest and Palk makes it work so well that there’s a delay between the final blackout and audience applause for a few seconds, we’re all too emotionally drained to react to what we’ve witnessed.

This hypnotic production understands that horror can be quiet and unrelenting.