Why are the homeless dying? Some would rather take their chances outside in the freezing cold than risk the dangers of an overcrowded shelter system 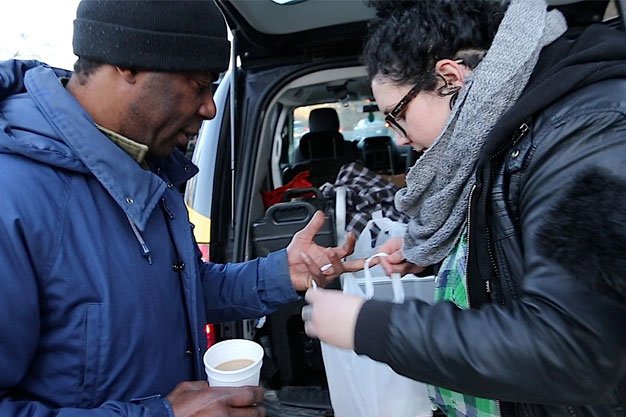 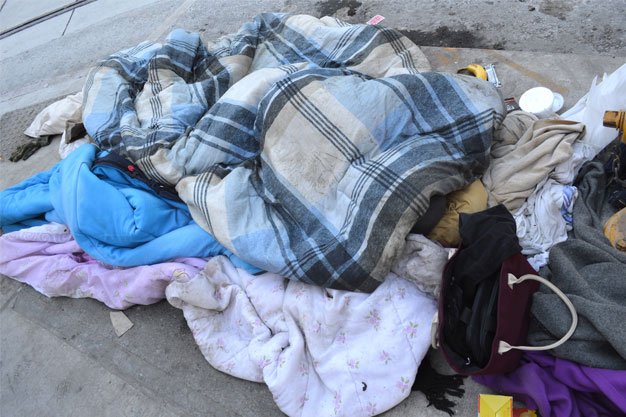 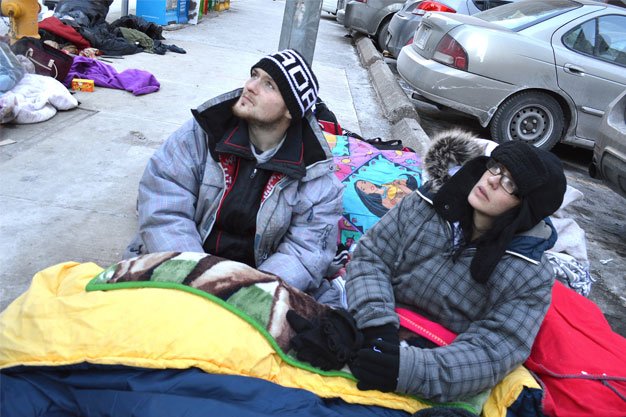 It’s minus-17 but it feels a lot nastier with the wind chill. Downtown office and hospital workers scurry past the homeless couple huddled among sleeping bags and belongings on top of one of the coveted warm-air grates at Queen and Victoria. Some passersby do a double take at the moving mass of sleeping bags under which the two have burrowed. A woman drops two Harvest Crunch nutrition bars on the pile. Someone else rousts them and offers a knitted scarf, a pair of fleece mittens, long johns and a Russian-style hat with ear flaps, all clearly appreciated by the couple.

Four homeless people froze to death on the streets of Toronto in January. The city responded by renting blocks of motel rooms to create 90 new temporary shelter spaces. “It’s shameful that it takes four deaths to get people even talking about it,” says Lauren Gostick, a frontline social worker with North-York-based humanitarian org Ve’ahavta.

Gostick and a colleague spend six hours a night every Sunday to Thursday patrolling the streets in their van, on the lookout for homeless people in need. They deliver survival essentials such as hygiene and medical supplies, hot coffee, sandwiches, soup and warm clothes.

“We equip them with what they need in the moment, but that’s more like an icebreaker to see if they need any counselling, referrals or a ride to a warming centre. That’s what we’re there for,” says Gostick.

When temperatures drop to minus-15 or colder, Toronto’s medical officer of health calls an extreme cold weather alert. That’s the cue for select emergency warming centres to open their doors and let people in out of the cold. Seven alerts have been issued so far in January.

Last year, Metro Hall was a pilot warming centre. This year the St. Felix Centre in the west end and Margaret’s Drop-in in the east have been equipped to stay open all night. Gostick says many of her clients prefer the warming centres and, in some cases, even the streets to shelters.

“The shelter systems in general are broken and they’re old,” she says. “You’re thrown in with a large group of people who are all in an immediate, acute crisis situation. One person may have extreme mental health issues, another is dealing with substance abuse and somebody else is smoking crack in the bed across from you. It’s survival of the fittest.”

The city has its own outreach program, Streets To Homes, but “their primary goal is to get people into their facilities. The more people who are sleeping in their beds, the more money they get to continue doing what they’re doing,” says Gostick. “Not to say that getting people inside isn’t obviously vital,” she continues, “but when you’re working with a demographic that is street-involved, you have to meet people where they’re at. And in the last few weeks, people are dying outside, so that need isn’t being addressed, clearly.”

Sixty-year-old Charley Rankin lost his job three months ago and suddenly found himself homeless. The former iron worker has seen the inside of nearly every shelter in the city.

“A lot of people don’t like going to the city shelters because they don’t feel they’re safe. You’ve got to sleep with your steel-toed boots on if you want to ever see them again,” he says. “And there’s nothing you can do. There’s guys in there that look like they work out six days a week. Even the staff is scared. They run the shelters, not the staff. The staff is three women in a glass cage, and there’s 273 men. They don’t go outside that cage after bed check. They know it’s lawlessness.”

Rankin says he sometimes stays in all-night coffee shops, but that’s not safe either. “There are homeless gangs in downtown Toronto, 20-year-olds. You think they’re kids just coming home from a bar,” he says. “They kind of half-surround you [and] as soon as you fall asleep, they rifle through your backpack, and anything they need that they won’t have to go buy they grab.”

Rankin prefers the warming centres in the Toronto Drop-In Network, which runs Out Of The Cold programs in locations across the city. Most offer a hot meal, a mattress to sleep on and a blanket. “You get a coffee and maybe some juice and a bowl of porridge, and they give you a (TTC) token and away you go. Your belly’s full and you’re good for the day.”

Initially intended as a temporary solution, Out Of The Cold has been serving the homeless and the marginally housed for nearly 30 years while waiting for politicians to take over the work of caring for Toronto’s most vulnerable.

When he’s not looking for work or transitional housing that’s safe and affordable, Rankin is busy working on a crowdsourcing campaign (startsomegood.com) “to raise funds for a new shelter here in Toronto.”

He says goodbye to the couple huddled on the steam grate and leaves with this parting shot: “If you have a normal 9-to-5 job and a place to stay, you don’t even realize that there’s any kind of crisis for the homeless. But believe me, seeing it from the bottom rung of the ladder, there is a definite crisis in the streets of Toronto, and that’s why people are freezing to death.”

Nathalie-Roze Fischer upcycles previously enjoyed clothing for a living. Since October she’s been putting her design skills to work cutting up old sweaters and converting them into toques and neck warmers. She calls her enterprise the Lennie Project, after her late uncle, “a big-hearted person who was particularly interested in the underdog and the homeless community.”

When Fischer gets creative, a medium or large men’s sweater can yield three hats, some headbands and a pair of mittens. As soon as the pieces are done, she drops them off at shelters across town.

Fischer’s initial thinking was to donate a toque to a shelter for every one she sold. But she soon realized the need was much greater than that. On January 24, Fischer and some craftivist colleagues from the Toronto Etsy Team, a street seller collective, gathered for a major sewing event. Fischer recognizes they’re offering band-aid solutions for a much larger problem.

“Is this about not having enough housing? Is it about mental health issues? We’re just trying to make it a less miserable situation.”

The Homeless Hub, an online research library and information centre, has published some alarming numbers showing that the life expectancy of a homeless person in Canada is 39, lower than life expectancy in the Congo. On any given night, 35,000 Canadians may be experiencing homelessness.

But there are some encouraging signs in other parts of Canada, where homelessness is being met with innovative housing-first initiatives.

The Homeless Hub defines housing-first as “a recovery-oriented approach to ending homelessness that centres on quickly moving people into permanent housing and then providing additional supports and services as needed.”

In the last five years, Medicine Hat, a city of 61,000 about 300 kilometres southeast of Calgary, has been wrestling chronic homelessness to the ground with robust implementation of its housing-first policy. Out of a homeless population of 850, more than 700 have been placed in permanent housing.

Medicine Hat mayor Ted Clugston, dubbed by local media “the mayor who ended homelessness,” said in a recent CBC Radio interview the aim is to get people off the street “within 10 days of us recognizing that you don’t have a home or you’re sleeping rough or in a shelter.”

The city donated land and resources, and with help from the province of Alberta has managed to build townhouses. Clugston estimates that providing emergency housing and services to a homeless person who is in a state of acute crisis costs around $80,000 a year, whereas a long-term housing-first approach will bring the cost to taxpayers down to $20,000 a year.

The Homeless Hub’s 2014 State Of Homelessness In Canada Report notes that while Canada’s population has grown by 30 per cent over the last 25 years, annual national investment in housing has dropped by more than 46 per cent.

The report estimates that homelessness costs the Canadian economy $7 billion a year, and that an investment of $106 a year per taxpayer would mean an increase of 8,800 new units of affordable and supported housing annually and could reduce the cost of homelessness by $3 billion each year.

But “as much as we talk about working on housing-first initiatives, there is still this connotation that certain people deserve housing and others don’t,” says Gostick.

“It shouldn’t matter about substance use or mental illness. Everyone needs to have their basic needs met before they can achieve any kind of human potential.”

Drop-off stations for the Lennie Project

Homelessness On The Street