Giving peace a chance in Ukraine 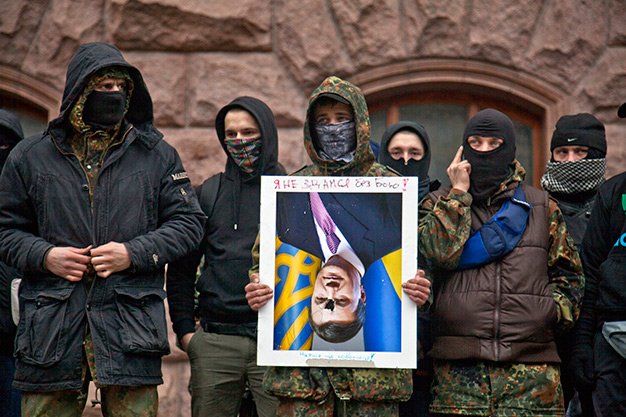 Nine experts representing diverse perspectives analyzed the war between Ukraine and Russia and potential ways of resolving it at a recent conference at U of T organized by Science for Peace. The audience of about 200 comprised academics, peace activists and Ukrainian and Russian Torontonians.

Predictably, some on both sides of the issue complained that their voices had been given too little time. Nevertheless, all agreed that they had learned from the dialogue. One may hope that, a better-informed public will influence Canadian and possibly Ukrain-ian and Russian policies.

Alexander Likhotal, president of Green Cross International and a former senior adviser to Mikhail Gorbachev, spoke by Skype from Geneva. Warning of “a smell of war” in Europe, he noted that Europeans fear that the conflict in eastern Ukraine portends a shift in global stability, a perception not yet preva-lent in North America.

Likhotal regards the conflict between Russia and Ukraine as only the lat-est in a series of accumulating crises – on energy, climate change and the economy. All show that existing security and economic structures are obsolete, yet people are afraid to change them.

At the end of the Cold War, Pope John Paul II warned against the West’s temptation to consider itself the “victor” and try to impose its system on the vanquished. Today, says Likhotal, we’re seeing the results he foretold. As Aleksandr Solzhenitsyn predicted, Ukraine is now the site of deadly conflict.

Likhotal criticized both Russia and the U.S. – the latter especially for violating the pledge James Baker is said to have made to Gorbachev not to expand NATO to the East. Yet Likhotal now thinks Ukraine is unlikely to join NATO, since the West has shown no interest in joining its fight.

Other speakers in the morning session attributed the conflict to the failings of Ukraine and Russia rather than the larger world order. Some blamed a growing “information war” that keeps the press in both countries from delivering accurate information.

Leonid Kosals, a sociology professor at the Higher School of Economics in Moscow, argued that the conflict is aimed at distracting Russians from their domestic problems, especially extreme social inequality, which was increasing long before the Euromaidan demonstrations of 2013-14.

Kosals denied that the U.S. controlled the protests in Kyiv’s Maidan square, an accusation that most Russians and many Canadians believe.

As Professor Paul Robinson of the University of Ottawa says, “It is best to view the war in Ukraine as primarily a civil war whose roots are local but in which foreign powers have med-dled.”

Robinson says, “The West did not ar-range for the overthrow of [former Ukraine president Viktor] Yanukovych. It did, however, support it.” He accuses the government of Canada of encouraging all the subsequent mistakes of the Ukraine government: “We should have told them not to send the army into Donbas.”

He was speaking in the most contentious of the conference’s three sessions, clashing with Borys Wrzesnewskyj, the former Liberal MP who was part of a Canadian delegation to the Ukraine during the contested 2004 election. Indeed, Robinson also said the current government of Petro Poroshenko “just doesn’t get that they have a legitimacy problem.”

He disputes allegations that members of the Russian army were involved in the fighting before August, characterizing the early fighters as volunteers led by Igor Strelkov, a “loose cannon” who acted on his own.

In August, however, more weapon-ry and Russian soldiers entered Ukraine, and Russia then ordered Strelkov to turn over command to its officers. Russia, Robinson claimed, had made it clear all along that it doesn’t want to absorb Donetsk and Lugansk. It much prefers that they remain in Ukraine, though the Donbas people may refuse to stay unless granted some kind of political autonomy.

As a fervent supporter of Ukrainian sovereignty, Wrzesnewskyj, on the same panel as Robinson, took exception to several of his assertions, especially his interpretation of Russia’s intentions. He believes that as early as mid-February 2014 (before Yanukovych fled), Russian president Vladimir Putin had decided to instigate a rebellion in Donbas and other areas, including Kharkiv.

As evidence, Wrzesnewskyj mentioned a document that had just been leaked to Novaya Gazeta, the last large independent newspaper still publishing in Russia. No one present had yet seen the document, but it was published a few day later. If accurate, it sheds light on decision-mak-ing in the Kremlin.

It was apparently written by a Russian oligarch in Putin’s closest circle as the violence unfolded in Kyiv in February. The author concluded that Yanukovych’s days in power were numbered. He proposed specific steps to foment rebellion in Crimea and Donbas and eventually attach those regions to Russia.

Oddly, this plan was not devised by a government or military official, but by a businessman, although its execution would require use of the army. Subsequent Russian interventions have followed the plan rather closely. It’s a testament to the strength of unofficial and competing influences within the Kremlin that it was leaked, probably by an official who disapproved of it enough to in-cur great risk. (Surely, Putin himself would want it kept secret.)

Wrzesnewskyj and Robinson predictably disagreed on another key issue: whether to provide lethal wea-ponry to the Ukrainian government.

Fred Weir, the Christian Science Monitor’s Moscow correspondent, de-scribed Russians’ long-term resent-ment of Western hypocrisy. Western governments make the rules but then break them – for example, granting independence to Kosovo or trying to overthrow the government of Syria. This, the Russians have concluded, is just the display of naked geopolitical power, not international law.

Weir, sidestepping the matter of right or wrong in this war, simply addressed the urgency of ending it. Matters of principle are less important than matters of peace, he said. The role of the West is to push Ukraine to make peace.

A similar pragmatic recommendation came from Andrei Kamenshikov, a Russian peace worker who has coordinated a network of peace-building organizations in Ukraine and adjoining regions. Winning territory is less important, he said, than winning hearts and minds. He sees the task as that of winning the future, not the past. Hence, he urged Ukrainians to work toward development and democracy. If they succeed, he thinks that Russians, when they eventually acknowledge their own so-cietal problems, will turn to Ukraine as a model of reform.

The final speaker, John Feffer, co-director of Foreign Policy in Focus at the Washington, DC-based Institute for Policy Studies, discussed the influence of U.S. foreign policy on the outcome of the war. Wars only end, he said, when one or both sides realize they cannot advance, but neither the rebels nor the Poroshenko government yet believe that to be the case. Feffer, like Weir, reminded the audience that hopes of a just solution may be unrealistic. Geopolitics is not fair, war is not fair, and peace terms are not necessarily fair. A better objective is the minimization of pain and suffering.

To end a war, one or both sides must often accept terrible losses. It cannot be otherwise in Ukraine.

Metta Spencer is a sociologist, writer, peace researcher and activist. She serves on the steering committee of the International Peace Bureau.