NOW MagazineNewsGiving up on America before Trump

Giving up on America before Trump

The election of Dubya, the world’s first glimpse of how absurd American politics were to become, was enough to motivate my parents to pack up and move to Canada 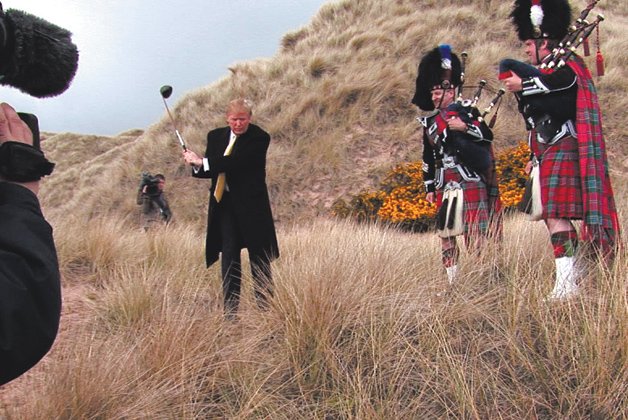 Donald Trump in a former life taking a club to the Scottish countryside.

Threatening, joking about and even seriously thinking about moving to Canada has become a tradition among Americans in the lead up to U.S. elections.

Back in the early 2000s some talked the talk when Dubya won. My family had a yard sale, packed up the Volvo, and got the hell out.

My parents were always civic-minded. When they bought their first house in Silver Spring, Maryland (hometown of Lewis Black, Joan Jhett and many other grumpy people) my father was instrumental in shutting down a bonafide crackhouse a few doors down. They fought hard to make their town a better place, participating actively in development projects.

But somewhere along the way they became exhausted. They had become tired not only of their town, but tired of the direction their country was headed.

After 9/11, when the threat of global terrorism crashed into North America’s consciousness, their growing feeling of unease was pushed to the limit.

I remember bringing home a list of emergency supplies from school for a kit to be kept under my desk. It included towels, water, and suggestions of non-perishable food items in the event we’d need to stay in school overnight in case of a terrorist attack. Our school had lock-down practice twice a month. A young janitor actually made a bomb threat in 2001.

One day my father took a pair of kindergarten scissors my sister and I were fighting over, and put them in his pocket. As a financial reporter, he later found himself at the Securities and Exchange Commission where he was detained for two hours because of the scissors – and subsequent comments to his interrogators that his treatment was unconstitutional. He was asked over and over whether he was a patriot. He was no longer sure what that meant.

This became part of our bizarre new normal as Americans.

On a field trip to the Smithsonian museum a security guard searched my Hello Kitty bag before I was allowed in. I was eight years old. Three of the victims of the Beltway sniper had connections to our family.

All of this, coupled with the election results that were the world’s first glimpse of how absurd American politics were to become, was enough to motivate my parents to move.

My mother was (accidentally) born in the U.K. so they thought of England, but it was too far from family. It became quickly clear that Canada was the only real option. So they sent away for a family immigration package.

We visited Ottawa a couple of times (originally the only Canadian city we’d heard of) but my father, the journalist, couldn’t find work there as he couldn’t speak French. My grandfather casually mentioned that Toronto was actually bigger than Ottawa.

Once the three years of paperwork were complete, my parents put the house on the market and my dad flew to Canada to find a job and an apartment. He bought his first cellphone to talk to my mother while he explored the various unknown neighborhoods. He decided on a high-rise near High Park.

My sister and I took our first flight, with terrified cat in tow. I was 11. My mother closed the sale of the house and drove up. My sister and I signed up for the Toronto Public Library summer reading program, because our TV took more than a month to arrive.

We’ve been asked, by border guards and extended family alike, what our reasons were for leaving more than 200 years of heritage behind – our ancestors came over on the Mayflower and include the Bibb brothers, who were the first two governors of Alabama. As we succinctly explain at parties, “We were those hippies who said that if that monkey gets elected, we’re moving to Canada.”

Now American politics has become a different sort of animal.

When Canada talks about progress, it feels less futile. We’re not perfect, but belligerent hate speech hasn’t boiled over into the political mainstream. And it is no surprise that many Americans are looking favourably toward a place where the quest for power has not become as obscene as it is absurd. To my sisters to the south, in true Canadian fashion, I’m sorry.

Martha Porado is a financial broadcast journalist and freelance writer.