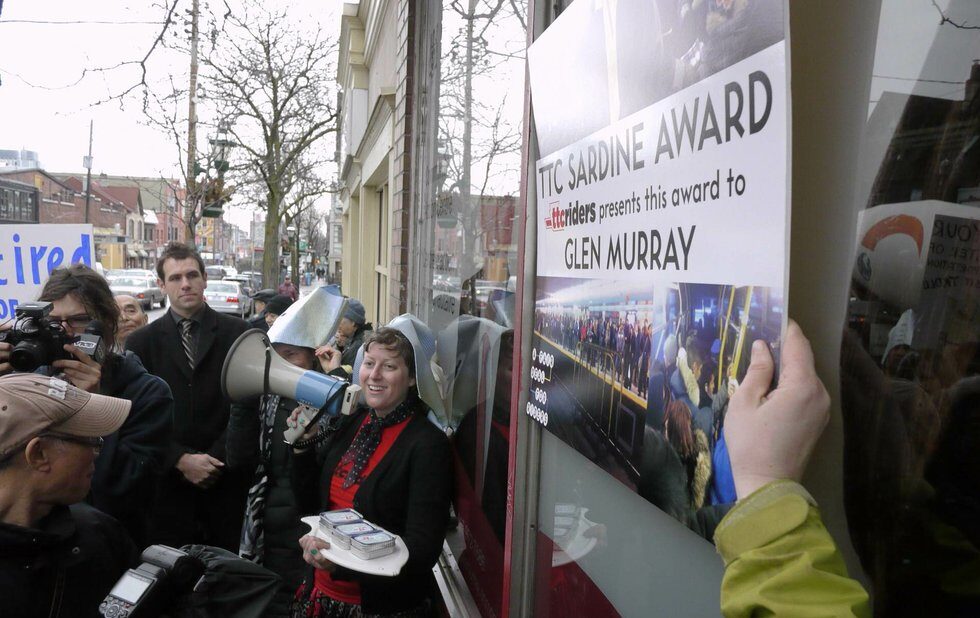 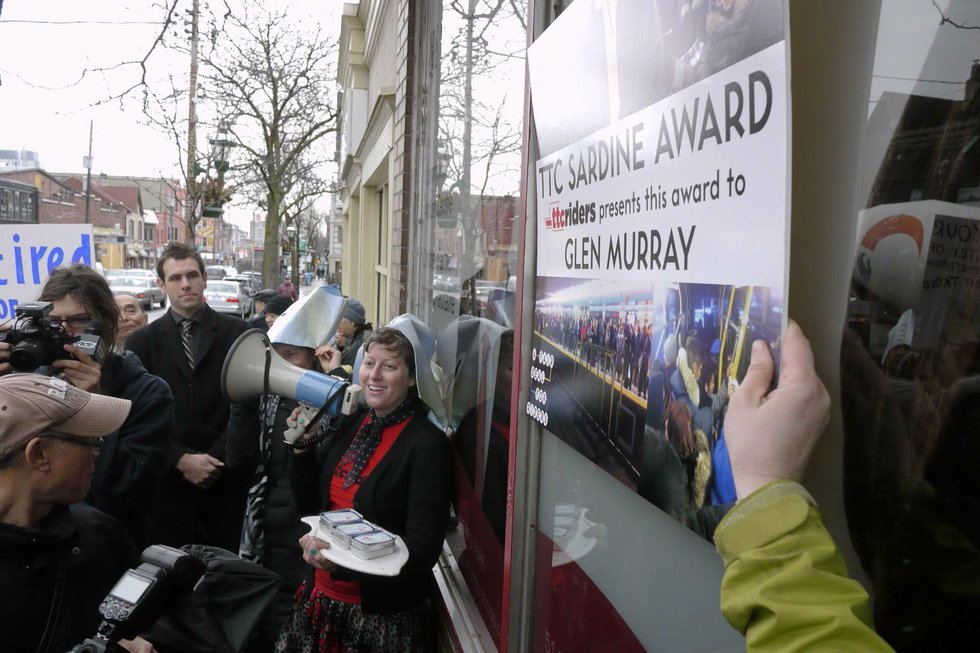 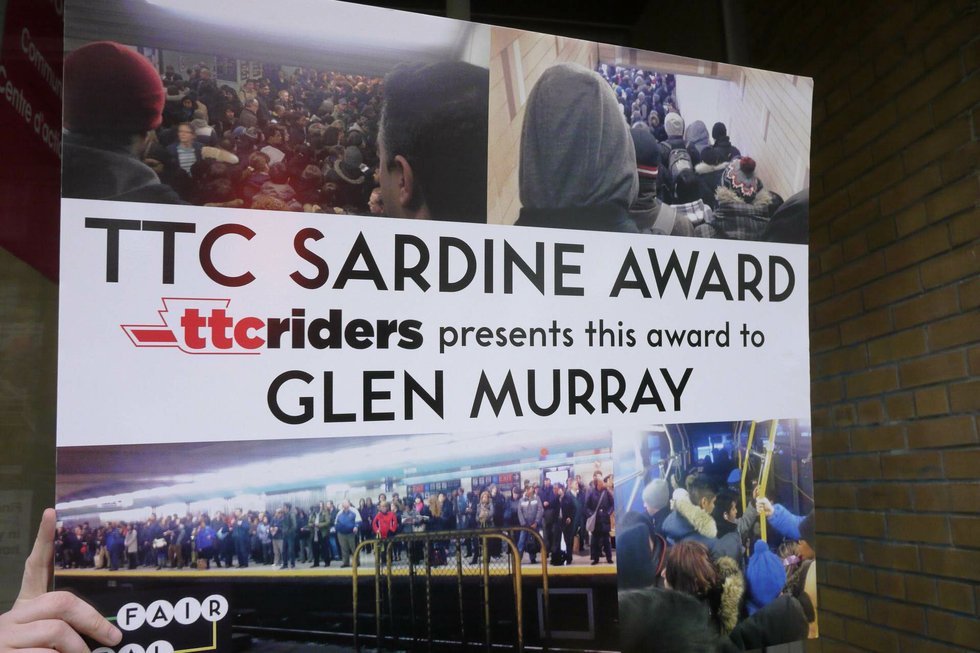 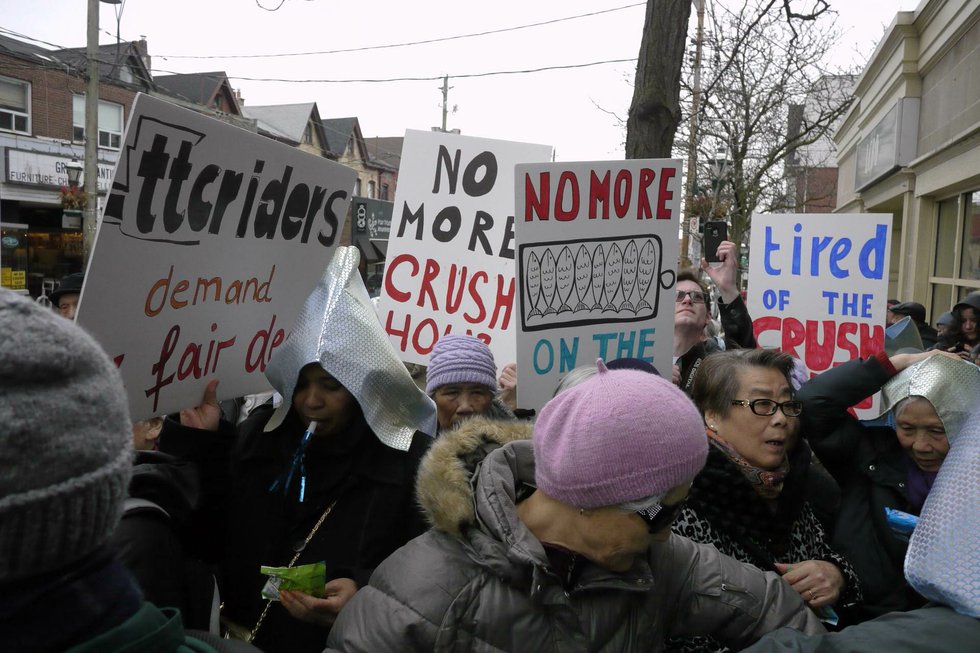 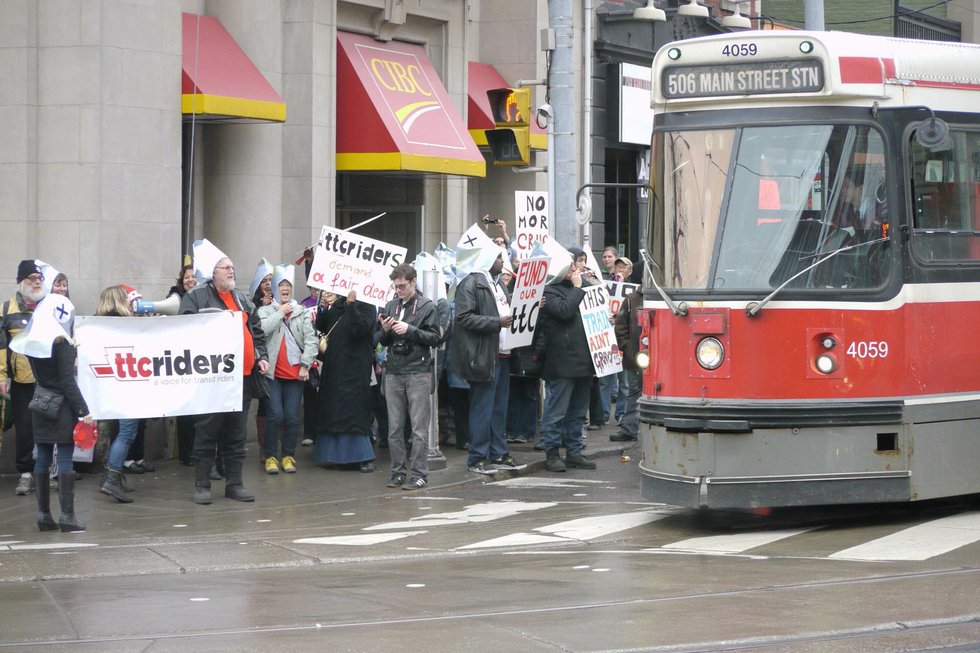 About 100 protestors, some of them dressed as sardines, rode the subway from Queen’s Park to Transportation Minister Glen Murray’s Parliament Street constituency office Friday to present him with TTCriders’ first annual Sardine Award.

TTCriders’ Jennifer Huang said the inauspicious honour was being bestowed on the Liberal minister because of his government’s “failure to regularly contribute fair funding to the TTC, even though it has the power to do so.” The transit advocacy group held a photo competition recently to document the worsening overcrowding on transit.

Murray wasn’t at his office to formally receive the award, so protestors, who included members of the University of Toronto Scarborough Student Union and the Ontario Chinese Seniors Association, left a platter of sardines for the absent minister.

A stink soon followed when Murray took to Twitter a few hours later to send a sardonic message in response. Murray pointed out that the Grits are funding transit more than any other previous PC or NDP government.

Well, not exactly true where Toronto is concerned. As Councillor Gord Perks weighed in to point out, the NDP government under Rae actually funded 50 per cent of the TTC’s operating budget and 75 per cent of its capital costs.

The minister countered that the Grits have transferred gas taxes to the city and uploaded the costs of social services. Murray suggested the city wasn’t doing enough itself to fund public transportation. He noted that council rejected revenue tools to raise money for transit. And there’s the rub, to get back to the sardines analogy.

Whether the provincial government will live up to its commitment to revenue tools to raise money for transit remains an open question. A special panel set up by the Grits has recommended a number of taxes. But Premier Kathleen Wynne, in what looked like a pre-election move, recently took a whole whack of those off the table saying she’s not prepared to ask middle class families to pay more.

The government and Murray will have an opportunity to put their money where their mouth is in the upcoming Liberal budget, which is expected in a few weeks. Will it follow through on its commitment or take transit users for another ride like, for example, it did by saddling Toronto with a three-stop stubway extension in Scarborough? Doh. Meanwhile, enjoy the sardine pics.