It’s true: Sexism is alive and well in Canadian newsrooms 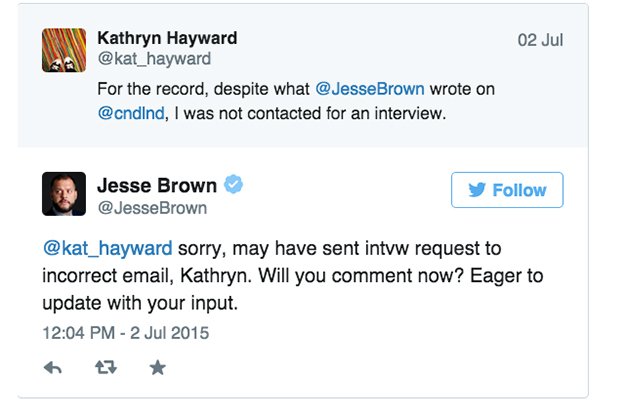 I was pleased to see a tweet on July 2 by NOW columnist Jonathan Goldsbie saying the Globe and Mail sounds like a shitty place to work, especially for women. He included a link to the Canadalandshow.com story Women Editors Are Fleeing The Globe And Mail.

It’s no secret. Sexism is alive and well in the newsrooms of the nation, as it is in many workplaces in Canada and around the world. It was only a matter of time before a well-known media critic like Jesse Brown would write about it on Canadaland.

Brown has uncovered important stories, including the Jian Ghomeshi scandal. But sometimes he’s too quick to publish things that seem to be based on rumours or the bitter feelings of (ex-) employees with an agenda.

In his latest, he says the predominantly male leadership at the Globe has a problem with women. He cites the recent exodus of four female editors and lists the names of 17 other editors and reporters/writers who have left in the last three years.

Considering that the Globe has offered buyouts, laid people off and gone through several staffing changes in that time, numbers alone do not indicate that the paper discriminates against women.

In his original post he wrote that none of the four female editors who had left in the last few weeks “would speak to Canadaland about their departures.” Two have since revealed on Twitter that they were not contacted for comment. Brown tweeted back to one of them that he may have had the wrong email address.

A number of men have also left the paper in the last three years. Off the top of my head, I can think of eight to 10 male staffers who left in the same period.

I did an internship at the Globe a couple of years ago, followed by a summer contract. It was a shrinking newsroom when I left, the second year in a row with a hiring freeze.

The Globe was a fantastic newsroom for me to work in, but I can think of all kinds of reasons some-one would want to leave: attractive buyouts, lack of opportunities for growth, desire to explore different and emerging brands of journalism elsewhere, a need for change, personal/health/family considerations. One of the four editors Brown cites is in fact on voluntary leave.

He doesn’t say why his anonymous sources should be trusted to speak for all the women who have left the paper.

None of this is to say that Brown’s entire 800-word post is inaccurate. There are nuggets of truth in it. Yes, top management at the Globe is dominated by men.

And there is a real sexism problem in the Canadian media. For instance, I was asked to start a parenting blog as soon as an editor (not at the Globe) found out I was a parent. In my experience, a woman is presumed to be uninterested in anything but the welfare of her children the second she conceives.

I have spoken with women journalists who say they’ve had to fight tooth and nail to work as foreign correspondents when editors decided they should stay on Canadian soil for the sake of their children.

And I’ve heard lots of stories from female reporters who feel their male counterparts were always treated preferentially for no apparent reason by specific editors. Sexism can be powerful but subtle and hard to pinpoint.

And there’s racism, too – like that time I was asked to focus on the “brown community.” (Again, not at the Globe.) This shit exists. For real. And I know I’m not the only one to have experienced it. Women, especially those just starting out in this threatened industry, are reluctant to talk about it. As I said, it’s hard to talk about because it’s systemic.

But it does need to be addressed for real change to take place. Workplace discrimination affects employee morale and welfare, and it determines what stories get covered, how they’re covered and the way news is presented.

It seems to me that Brown has been careless in his role as media critic, calling out journalists for nurturing a patriarchal culture without substantiating his case. If advocating for women’s rights is his end goal, this is not the kind of treatment the subject deserves.

Our media landscape is dominated by white men. There is nothing earth-shattering in that. But unlike the women listed in Brown’s report, the women I know in the industry are actively fighting sexism to have the meaningful careers they want, not quitting.

Vidya Kauri reports on federal law for Law360 in New York City. This is a condensed version of a column that originally appeared at vidyakauri.wordpress.com.