GHOSTBUSTERS directed by Paul Feig, written by Katie Dippold and Feig, based on the screenplay by Dan Aykroyd and Harold. 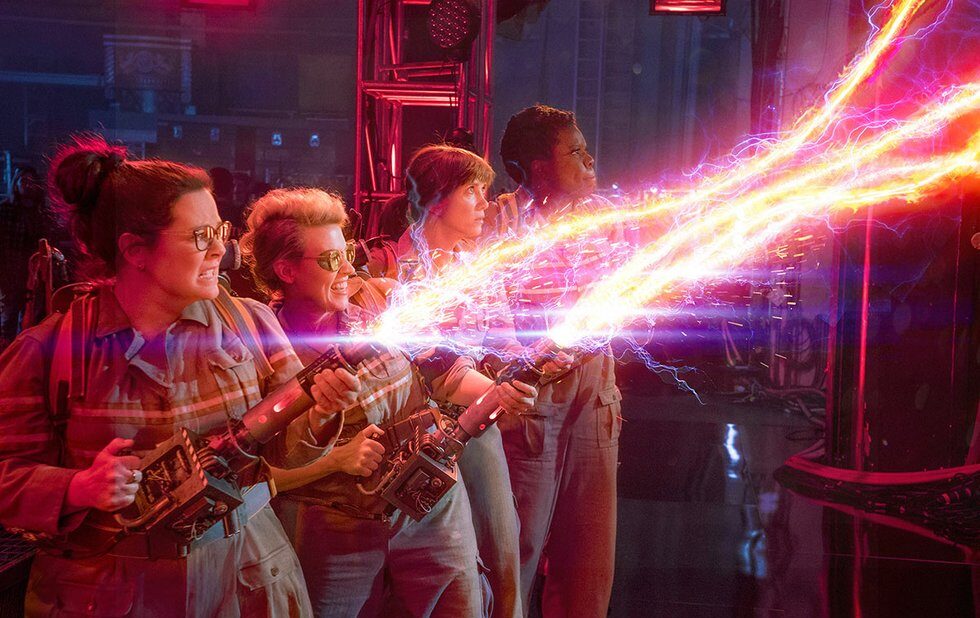 Well, here it is. Ghostbusters with ladies. Look outside, man-babies: the world has not ended and neither the 1984 original nor its 1989 sequel – the ones where Bill Murray, Dan Aykroyd, Harold Ramis and Ernie Hudson wore the jumpsuits and carried the proton packs – has been erased from existence. Everything’s going to be fine.

More to the point, it’s a good movie. The new Ghostbusters – directed by Paul Feig, and starring his Bridesmaids leads Kristen Wiig and Melissa McCarthy – is really fun, striking a healthy balance between homage and forging its own path.

The basic spine is the same: parapsychologists leave academia to chase spooks in New York City, build a team and save the world. Fans of the original will recognize certain locations, faces and arcane terminology. We still don’t know what total protonic reversal is, but the characters do, and that’s just fine.

But the energy is different. The script, by Katie Dippold (The Heat) and Feig, is looser and shaggier, giving the cast room to riff. It’s a pleasure to watch Wiig and McCarthy bounce off of each other as former BFFs reunited by the supernatural. As in Bridesmaids, Wiig’s nervous hesitation and McCarthy’s irrepressible will are perfectly matched.

And it doesn’t stop there. Leslie Jones ably fills the Ernie Hudson role of an ordinary civilian who joins the team, and Kate McKinnon is a constant delight as the Ramis to McCarthy’s Aykroyd, a hyper-brainy physicist who reacts to the people around her as if they were characters in an especially challenging video game.

If McCarthy was the breakout star of Bridesmaids, McKinnon is the discovery here: her line readings are utterly unpredictable, and her physical work is amazing. And she does it all while styled like the animated Egon Spengler from The Real Ghostbusters, which took me forever to figure out.

This is what I mean about the balance between homage and originality: Ghostbusters 2016 preserves the spirit of the original while letting the new people own their interpretations. It’s not a slavish remake – there’s no Dana Barrett or Louis Tully this time around – but it has room for new comic ideas like Chris Hemsworth as the world’s dumbest receptionist.

Dippold and Feig are also pretty savvy about their underdog dynamic, forcing our heroes to prove their mettle to a number of different antagonists before taking on the big bad.

And here’s a fun fact: it turns out that the villain of this new Ghostbusters is an antisocial apocalypse cultist who condescends to women and hates joy. The movie predicted its own backlash. Nice.

One response to “>>> Ghostbusters is big fun; slime the sexist haters”