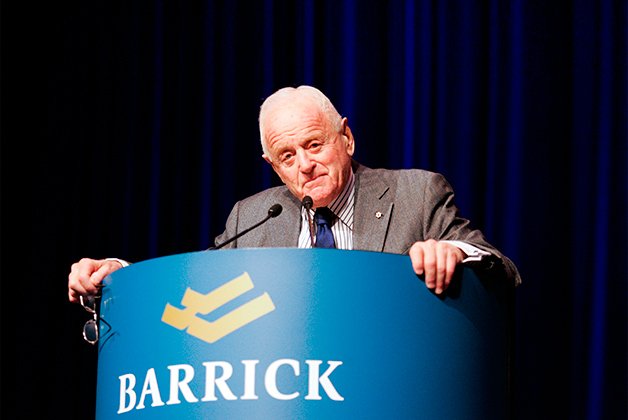 Barrick Gold founder and chairman Peter Munk said goodbye to the company he started more than 30 years ago at its annual shareholders’ meeting in Toronto on April 30. His departure marks the end of an era for Barrick, but MiningWatch is much more concerned about the legacy the company is leaving behind internationally.

The protest crowd outside the meeting was smaller than usual, according to Catherine Coumans, a research coordinator with MiningWatch, a Canadian NGO that advocates for those affected by mining. That was because of “the overwhelming level of focus on the long-overdue resignation of Peter Munk.”

Inside the meeting, Coumans, said she is “concerned that the legacy in developing countries is one of human rights abuses, environmental destruction and local conflicts that are very costly to communities.”

Barrick is implicated in alleged gang rapes and other violent abuses by private security guards employed at the Porgera Gold Mine in Papua New Guinea, according to a report by Human Rights Watch. Another controversial Munk project, the Pascua-Lama open-pit site in northern Chile, which has been in development for 20-plus years, is currently suspended due to environmental violations by Barrick.

In reponse to what Barrick’s communications president, Andy Lloyd, calls “credible allegations of sexual assault” in Papua New Guinea, the company launched an investigation, terminated the employees implicated in the allegations and turned over the results of its investigation to police. Barrick has since implemented a “remedy program that provides compensation to women who were victims of sexual assault.”

At 86, Munk is a legend in the gold industry. He told the capacity audience at the Metro Toronto Convention Centre that he recognized “it was time for a change and new start.”

Munk promised he would help incoming Barrick chairman John Thornton, saying, “You can take Munk out of Barrick. But you can’t take Barrick out of Munk.”

Today Barrick is worth about $22 billion. With more than a dozen mines globally, it’s the largest gold company in the world.

Regardless, the company is now trying to recover from one of its worst years ever. Its acquisition of Equinox Minerals forced the company to write down (reduce its net income by) about $4 billion. Both Pascua-Lama and Equinox have seemingly hurt the company and plunged it further into debt, contributing to the loss of its AAA credit rating.

One of Barrick’s most outspoken critics, Toronto mining justice organizer Sakura Saunders, says that while Munk can be linked to some of the the company’s more egregious business decisions, his departure will have little impact on its direction.

“He has done a horrible job – their share prices are down – but the company is not resolving the issues I care about, whether he’s in power or not.”

The Norwegian Government Pension Fund divested its Barrick holdings in 2009 over the Porgera Mine’s pollution of a 600-kilometre river system. But that mine remains in operation, and human rights violations there continue to mount. Last year, an illegal miner was killed in a confrontation with security forces employed by Barrick.

In Chile, in addition to strong community protests, lawsuits have been filed against Barrick and millions of dollars in environmental fines imposed by a Chilean court. Barrick spent $6.7 billion on the mine site before the shutdown last October, but costs have now increased to an estimated $8 to $8.5 billion.

To top it all off, a multi-billion-dollar securities class action suit was launched in April on behalf of shareholders against the company and several of its senior officers, including Munk, over the losses on Pascua-Lama.

Munk’s retirement comes just after talks collapsed between Barrick and its main rival, Newmont Mining, over what could have been one of the biggest mergers in gold mining history.

Both companies took to the media to blame each other. “That’s the kind of people they are, and that’s why it’s so difficult to make a deal. They are not shareholder-friendly,” Munk said about Newmont in a National Post interview.

Newmont chair Vincent A. Calarco wrote in a letter to new chairman Thornton that Munk had killed the merger by calling it “dead,” making the board unanimously decide not to pursue the deal. Clearly, Munk’s retirement will leave a noticeable absence of audacious leadership, but if this letter is any indication, he’s still the same man known for his bold business decisions.

“It’s like two kids playing in a sandbox” says John Ing, president and gold analyst of Maison Placements Canada. “The logic for this deal is still there, but when you get down to each other’s personalities, it’s a different kettle of fish.

“Barrick is a company that has been built on mega-deals throughout its history. That’s how they have grown as a company. However, with mega-deals come mega-problems and mega-writeoffs.”

At the shareholders’ meeting, Barrick CEO Jamie Sokalsky took to the stage to explain that after a year of transformation, Barrick is leaner and stronger. “Returns will drive production – not production will drive returns,” said Sokalsky as he repeated the same message from 2013.

It’s been said that Munk should have left the company sooner and that he was pushed out by shareholder pressure over Barrick’s two years of missteps.

Ing disagrees. “I don’t think there was shareholder pressure for him to leave. Politicians overstay their time. Only the individual knows when is the right time to leave.”

After all was said and done, Munk stood up and waved to the audience one last time before he put on his fedora and walked off the stage. Love him or you hate him, many are hoping there will never be another one like him in our lifetime. His retirement may take the pressure off him for now, but the company’s activities, if the status quo continues, will face scrutiny for many years to come.