A lot of Godard’s latest is crap, but he explores the possibilities of 3D like no one else 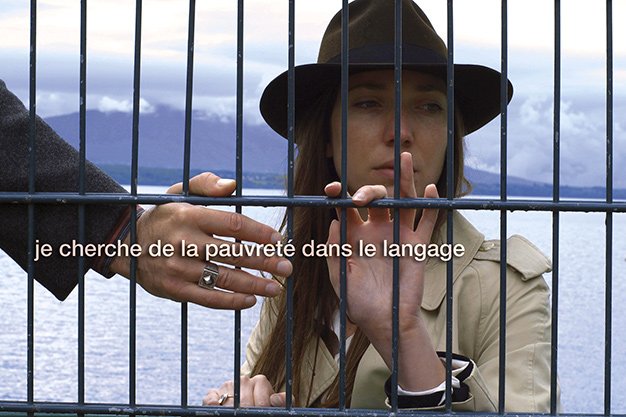 Heloise Godet gets a handout in Goodbye To Language 3D.

As the culmination of TIFF Cinematheque’s massive Godard Forever retrospective, the filmmaker’s latest feature, Goodbye To Language 3D, gets a commercial run at the Lightbox. It’s not very good, but seeing it in a theatre in 3D is as essential an experience as watching Christopher Nolan’s Interstellar in real IMAX.

But Godard has spent the last few decades making sure we know he doesn’t care about us in the least. He’s been trafficking in incoherent imagery and garbled political statements since the 70s. If you’re still showing up, you’re either a diehard follower or, like me, you’re sitting through Godard’s endless wanking about geopolitics and personal freedom in the hopes that he’ll deliver another masterpiece like Éloge De L’Amour.

Goodbye To Language 3D is not a masterpiece, but it is the work of a master who’s willing to reinvent the way we perceive narrative. At key moments, Godard and his cinematographer, Fabrice Aragno, desynchronize the two sets of images that our brains (and those glasses) fuse into a three-dimensional image. Close your left eye and watch the camera follow one participant in a scene close your right and see the other participant, standing still.

This revelatory technique is used mostly in the service of a banal series of conversations in which lovers walk around a house in various states of undress, yammering about philosophy and cultural theory in that uniquely French mode of intellectual exhaustion.

In a scene that encapsulates all of Godard’s excesses, a woman stands nude while her lover, perched on the toilet, expounds on the excretory im-agery of Rodin’s The Thinker while loudly moving his own bowels.

So, yeah, a lot of Goodbye To Language 3D is crap.

And yet there are scenes of simple, elegant beauty, most of them involving a really lovely dog who’s filmed sniffing around the countryside in long takes that let you appreciate both the animal’s undirected movement and the sense of place that 3D allows.

The dog poops, too, but as no poli-tics are involved I’m willing to let it slide.