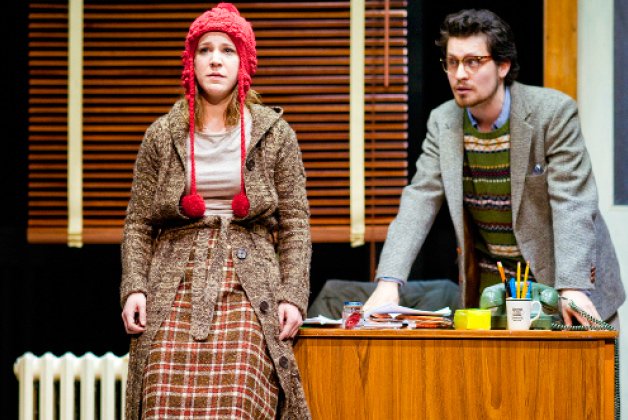 Nestled in the middle of the University of Toronto, Hart House Theatre is the perfect location for this hilarious, thought-provoking remount of Ann-Marie MacDonald’s 1988 debut comedy about a quirky Shakespeare scholar who gets magically transported into two of the Bard’s most famous tragedies.

Constance Ledbelly (Lesley Robertson) is a timid yet dedicated assistant professor who is convinced that Othello and Romeo And Juliet were both originally comedies before being adapted into tragedies. However, her ideas aren’t taken seriously by her male colleagues, and when one threatens her position at the university, she has a meltdown and is sucked into the worlds of the plays, where she searches for evidence to support her theories while becoming comically entangled in the action of each plot.

Feminist themes of equality and self-confidence run through the work. The female protagonists of each play defy Constance’s preconceived notions and teach her important lessons about how to stand up for herself and her ideas. However, in the process, Constance derails the original plots: Desdemona comes to believe that she’s a witch, while Romeo and Juliet both fall in love with her and compete for her affection.

MacDonald’s fractured-fairy-tale approach to Shakespeare (inverting Constance’s theory, she converts the two tragedies into a comedy) is consistently funny and revealing, and these qualities are maximized by the strong cast.

Robertson nails the awkward, absent-minded and academic humour, all while making Constance a relatable and familiar character whose minor eccentricities like drinking beer and smoking in her office only serve to endear her to us further.

Director Carly Chamberlain uses a scene featuring a sword duel to effectively showcase Constance’s transformation from overly deferential doormat into someone surprised by her sudden capacity for bravery. The change is subtle but meaningful Constance doesn’t become a full-blown warrior like Desdemona, but we see new flashes of self-assuredness.

Good Night also has an important metaphysical thread in Constance’s search for the true identity of “the author.” That said, it’s above all a comedy, and the consistent laughs demonstrate how well this production captures the spirit of the original.