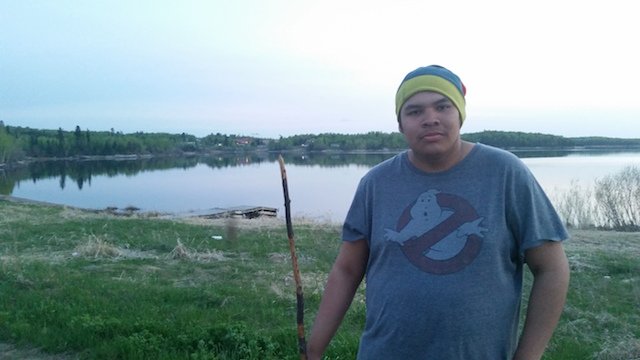 Grassy Narrows, known as Asubpeeschoseewagong [a-sub-eeshko-see-wa-gong] in Anishinaabemowin, is located on the Ontario side of the Manitoba border near Kenora, 1,700km northwest of Toronto.

Struggling to protect their territory has been part of Grassy Narrows life for decades.

In the 1960s, 9,000 kilograms of mercury was dumped into waterways from the nearby Dryden pulp mill. Still unresolved, the issue was taken to the United Nations this winter. Faced with ongoing clear-cutting of their forests, Grassy Narrows inhabitants halted traffic along a logging road in 2002. The blockade is ongoing, turning forestry trucks away to this day.

Under Treaty 3, signed in 1873, the First Nation has the right to hunt and fish as they always have. Canadian courts have acknowledged that clear-cut logging threaten those activities, but the Supreme Court of Canada disagreed in a later decision. Forestry companies remain aggressive as a result. Ontario’s recent logging plans show sections of Grassy Narrows slated for clear-cutting.

Most recently, the community has been shaken by a youth suicide crisis.

Despite it all, 19-year-old Darwin Fobister shares an optimistic message. “I’m proud of the amazing community we have here,” Fobister writes to NOW during a recent email exchange. “We are starting to come together to make things better for youth.”

Fobister is talking in part about Home to Me, a slick pop-infused music video with traditional strains made by 12 Grassy Narrows youth in collaboration with the traveling production troupe N’We Jinan. The track has gone viral – over 24K shares and nearly 500K views on Facebook since its release in March. The video poses deep questions about language and place.

“We are getting heard,” Fobister says, “and that’s one way we are dealing with these issues, because the more media we do, the more we get heard. And we need more people to hear our stories about why we love our home and what we need for support.”

In the video, 16-year-old Sharice Bruce starts the chorus by drawing out the words “Gete Ishkonigan,” in a calm singing voice. It’s the word from the Anishinabe language, Anishinaabemowin, for Home to Me, the name of the song.

Bruce tells NOW that using her language “is important because we want to keep our culture alive and not let it die.” Eleven-year-old Jade Fobister adds, “I am very proud of the elders that gave up their time just to teach children our language.”

Connection to the land is evident in Home to Me, with lyrics like, “This is a place where we love the land let’s work to show our pride.”

Fobister tells NOW that her favourite things about Grassy Narrows are: the landscape, the people, and “what the community is doing for our people.” Another line from the song goes, “Rise from the ruins, keep protecting the land don’t take it for granted, can’t neglect what we have.”

As part of getting their story out, a contingent from Grassy Narrows, including some who perform in Home to Me, are spending this week in Toronto. They will be speaking tonight (May 31) alongside community elders and environmentalist Avi Lewis at an event at Ryerson, then taking part in the River Run rally at Queen’s Park at noon on Thursday, June 2.

The River Run, held every two years since 2010, is an art-based march using masses of blue fabric to create a wild river symbolizing Grassy Narrows’ wish for their river to flow with life again.

This week an independent report was unveiled on the feasibility of remediating Grassy Narrows’ waterways from the mercury dumped by the Dryden mill, which continues poisoning the people in the area.

Lakes in the region still teem with fish but their flesh is too laden with mercury to be safe for consumption. The Ontario government has not acted to clean up the mercury. The Liberal government’s position is that more research is needed to see if the damage can be reversed. The new report indicates remediation is possible, reigniting discussion on the subject.

When asked about River Run and what she is looking forward to on her visit to Toronto, Charice Bruce highlights “being there for my community and supporting them.”

For Jade Fobister it’s “watching my community youth performing live in front of a lot of people.”

Darwin Fobister wants “to see how the youth respond to the moment because they have the most powerful voice and people should listen. I want to see how people in Toronto will respond to that youth voice.”

David Gray-Donald is a freelance journalist and community organizer.