NOW MagazineNewsGreenest highs and lows of 2009

Greenest highs and lows of 2009

In a year when Canada's green rep sank deeper into the muddy bitumen, and even bisphenol-A-free baby bottles were caught.

In a year when Canada’s green rep sank deeper into the muddy bitumen, and even bisphenol-A-free baby bottles were caught lying, it wasn’t all gloom and doom. There were some rays of light amongst the tears, jeers and Parliament Hill-scalings.

So many green highs in the city this year, we must be stoned. Let’s see: there was the plastic bag tax knocking back disposable sack use, this spring’s green roof bylaw that made plant life mandatory on all new roofs over 2,000 square feet, and the billions David Miller finally secured for rapid transit from the province. But the craftiest was the city’s new plan to get condo dwellers out of their cars: developer-funded, city-mandated free TTC passes for a year. Now, that’s the better way.

Knee deep in a garbage strike, it became clear that even when the green bin was getting emptied, its contents weren’t being properly composted. Turns out thousands of tons of our old apple cores and stale Zoodles were being trucked off to landfill on the sly, with some plastic residue from diapers and bags going up in smoke in a Michigan incinerator. Subcontractors were mostly to blame, and the province has since promised to crack down on the quality of our compost, but if we could turn back the clock, we’d switch the city to a cleaner plastics-free green bin.

HIGH: NO MORE WIPING OUR BUTTS ON THE BOREAL

After a five-year Greenpeace campaign complete with building-scalings and blockades, Kimberly-Clark, the maker of Kleenex/Cottonelle/Scott products, officially waved a white tissue. It’s now committed to boosting its otherwise lacklustre recycled content and making its disposable tissue products boreal-free (except for FSC-certfied trees) by 2011.

Just as one boreal bad guy puts down the axe, another two fire up the chainsaws. This year the wrath of forestry activists fell on Xerox, the self-proclaimed champ of sustainability. Its offices were declared a “forest crime scene” back in July due to the company’s dodgy sourcing from logging giant AbitibiBowater, which is also on the boreal blacklist.

HIGH: GREEN POWER TO THE PEOPLE

We cracked open the organic bubbly when we learned that homeowners and entrepreneurs alike would be getting up to 80 cents per kilowatt hour to produce clean, green electricity through Ontario’s truly groundbreaking Green Energy Act. By making conservation the law for all utilities and slicing red tape for anyone hoping to unplug from or give to the grid, the province raised the bar continent-wide.

LOW: TOO BAD ABOUT THE SOLAR SHAFT

To all those who laid out tens of thousands of dollars for solar panels during the spring and summer of 2009, expecting to cash in on the province’s new Green Energy Act, only to discover in the late-coming fine print that their panels lacked enough Can-con to make the cut, well, we’re sorry. Even if we totally embrace the Can-con rules as a way to boost the local renewables industry, it’d be nice if we could give you something. How ’bout a gold star?

HIGH: AT LEAST WE HAD SOME POLS TO BE PROUD OF IN COPENHAGEN

We wish we had a high-five-worthy high from the climate summit to end the year on a happy note, but at least we can be proud our mayor made us look good by putting a greener face on Canada, as did Ontario and Quebec when they called out Harper’s targets as a sham. Now, if only the feds could follow Quebec’s lead by committing to a 20 per cent emissions slash below 1990 levels instead of pretending the horizon is filled with bubblegum and rainbows.

Move over, USA. The world’s got a new planetary scoundrel, and that’s our federal government. Britain’s leading green thinker, George Monbiot (the man who called Canada out as a “corrupt petrol state”) even broke his famous ban on flying to jet over here to shake some sense into us. In 2009, our status as planetary saboteur prompted a Fossil Of The Year Award in Copenhagen (our third) and deep shame amongst Canadians, 75 per cent of whom report feeling embarrassed about all this. Don’t be surprised if Canadian travellers start pinning U.S. flags to their backpacks. 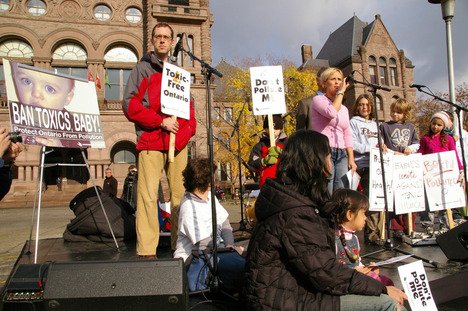 Joy to the world, St. Nick won’t be delivering gender-bending toys in the future now that Health Canada has finally followed Europe and the U.S. by announcing a move to ban six hormone-disrupting phthalates from soft vinyl toys. The government also committed to knocking accepted lead levels down from double the U.S. standard to about a third of it, so kids should no longer be playing with the real-life equivalent of Saturday Night Live’s infamous Happy Fun Ball.

Weirdly, Liberals and Big Plastic toy makers both worked to successfully stall the new consumer safety product act designed to give the feds power to issue product recalls of their own if they spot a toxic toy or deadly dog food. Even our big-biz-friendly neighbours to the south have recall powers. It’s about time we did, too.