NOW MagazineLifeCustom grills, woodworking and robots, oh my! Theres more to Maker Festival than you think

Custom grills, woodworking and robots, oh my! Theres more to Maker Festival than you think

When Ceda Verbakel moved from Melbourne to Toronto three years ago, she knew nothing about the maker community. At the. 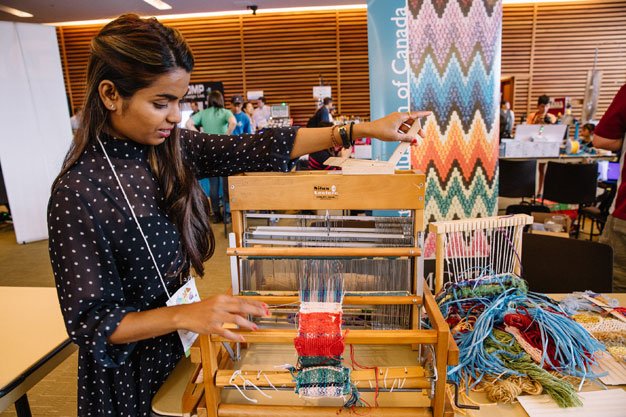 Toronto makers will show off their projects at the Reference Library as part of Maker Festival.

When Ceda Verbakel moved from Melbourne to Toronto three years ago, she knew nothing about the maker community. At the time, the sex-ed teacher considered herself crafty she enjoyed sewing however like many of us, believed that maker spaces were reserved for tech geeks, hackers, engineers and modern machinists. But then, a friend who was involved in Maker Faire in the U.S. changed her mind.

She told me they wanted to do one in Toronto and asked me to help out. I was reluctant at first, but then she asked me to organize the party, and I thought, Well, I can probably organize a party, says Verbakel. She got on board and volunteered at Torontos first official Maker Festival last year.

This year, the festival has expanded to a month-long event from June 15 to July 17. Nearly 100 workshops, speaking events and meetups will be taking over maker spaces, art studios and community hubs across the city. Highlights include beginners knitting and crocheting classes, glassblowing workshops, a chance to learn film photography and how to develop black and white film, jewellery-making and book-binding workshops, a coding day and a tech social night.

The entire festival culminates in a maker extravaganza at the Reference Library on July 9 and 10. The free, all-ages event gives makers a chance to showcase their creative projects and attracts more than 10,000 attendees.

Theres everything from a family who happens to just make things together and have weird robots they want to show everyone, to small makers who sell things like jewellery, Verbakel explains. A lot of it is around technology and different things people are doing in the city.

To kick off Maker Festival, a launch party will be held at the Centre for Social Innovation (192 Spadina) on June 15 from 6:30 to 10 pm. The party gives attendees a chance to check out Torontos newest maker space, STEAMLabs, which is located in the back of the CSI building.

STEAMLabs opened in January and unlike some maker spaces that specialize in only one type of making, such as tech or woodworking, it offers a variety of tools. Inside the large creative hub, makers have access to industrial wood and laser cutters, 3D printers, sewing machines, a wood shop, computers and more. The Toronto Tool Library, which loans tools from several branches, also has an express outpost at STEAMLabs.

Our mandate is that these machines are for people who dont necessarily know how to use them theyre for people who want to learn, says Verbakel, who is also the director of culture at STEAMLabs. Were really excited about having all kinds of people in here.

That includes women. There are three females on STEAMLabss team including Marianne Mader, who cofounded the space with Andy Forest, and many of the organizations volunteers are women.

Andy is very interested in making sure this doesnt become a dude club. We love dudes, but we dont want it to be all dudes, Verbakel explains. We have noticed that a lot of women are coming into the space, and in our last round of Maker Bootcamp a 10-week intensive for beginners where we teach them how to use all the tools it was all women.

Young makers are also welcome at STEAMLabs, and Verbakel says that an emphasis on STEM (an acronym for science, technology, engineering and math) education in schools has persuaded many families to seek out more hands-on experiences. Kids are also welcome to use the tools as long as they are supervised.

In Toronto, the maker community is large and growing, with many adults looking to get reacquainted with their creative sides. Some people are eventually able to turn the things they make into businesses. For example, at STEAMLabs, one maker has been creating prototypes for a sports game he invented and received Kickstarter funding for another maker uses the 3D printers at the new maker space to make custom grills.

His customers, they come in the back, he takes a mould of their teeth and then he melts gold into moulds, Verbakel adds. That speaks to being a producer rather than a consumer.

Most makers, however, never expect to earn a profit from their projects, and thats okay. They do it for the experience of building something with their hands, exercising their creativity and seeing how far they can take the convergence of technology and individual energy. That, perhaps, is the greatest satisfaction of all.

Having that permission to spend your time not working, not exercising, but making is therapeutic in a way, Verbakel says. We were once bakers and candlestick makers, and now we do a lot of consuming. We do a lot of working and selling other peoples shit, but in this community, I get this sense that its people being genuinely interested in something and then following through building it, or tinkering, or talking to a friend about it and making some weird art project. Its one kind of breeding ground for human flourishing.

Tickets to the Maker Fest launch party are $12 online and $15 at the door. All proceeds go to support Maker Festival, which is entirely volunteer run. Find details for all Maker Fest events here.

Realtors warn prices could face a steep decline in the fall if the coronavirus pandemic has a delayed effect on.