Or help Telephone Explosion's Jon Schouten raise enough to buy the guitar to gift to Burke: "No one deserves it more than [him] because he made it famous." 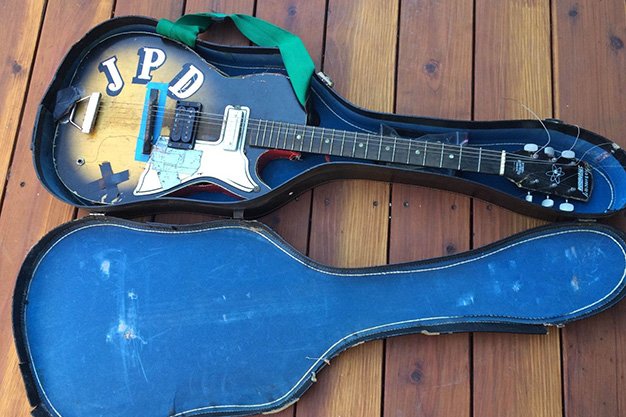 Perhaps the most famous guitar that's ever been played at the Silver Dollar.

The Toronto music community is joining American musicians in a massive campaign to raise money to help American filmmaker Aaron Aites pay the bills for the treatment of kidney cancer.

John Dwyer, of Thee Oh Sees and the Hospitals, is auctioning off the Harmony Stratotone he smashed over the head of Silver Dollar’s Dan Burke in an awful fistfight that broke out at the venue in 2008 (see video below) when the Hospitals started playing – before the opening act was done their set.

“The guitar still plays, but has been beat into submission and was retired, rather than try to bring it back to life for a tenth time,” Dwyer writes on the eBay auction page. “It’s rusty, dirty and has blood on the strings… it has many scratches and bite marks on the rear of the neck.”

Telephone Explosion’s Jon Schouten, who is friends with Burke and also plays in the band Teenanger, caught wind of the auction in a private Facebook group about music gear. He doesn’t know Aites, but says he spotted an opportunity to further help the cause – by trying to raise more money – enough to win the auction to gift the guitar to Burke.

“No one deserves it more than Burke because he made it famous,” Schouten says, emphasizing repeatedly that he does not advocate violence or condone what happened.

“It’s a good cause, and it’s got a direct tie-in to Toronto’s punk community,” he continues. “It’s a great network of musicians supporting musicians when these types of incidents happen, whether it’s medical bills or gear getting stolen. I hope that if I’m ever in a situation like that people will help me, too.”

So far, $38,900 has been raised on Go Fund Me for Aites, who directed the metal documentary Until The Light Takes Us. TV on the Radio is also raising money by auctioning off rarities on eBay, which you can find out more about here.

Schouten is hoping to raise $5,000 or enough required to buy the guitar, but says that even if they can’t get enough, the funds will still be donated to the cause. The auction closes on Tuesday, April 19, so move quickly.

Feel like going to a show now? Check out our music listings.