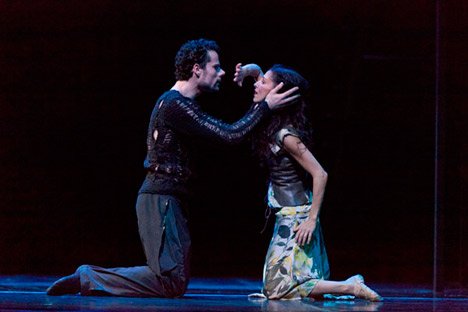 Kevin O’Day’s ballet Hamlet attempts to render into movement the story and poetry of the greatest play in the English language. There are moments that work wonderfully, but to paraphrase another of the Bard’s works, O’Day’s vaulting ambition sometimes o’erleaps itself.

The first half is terrific, beginning with the title character (Guillaume Cote, alternating in the role) on a bare stage in complete silence, contorting his body into shapes evoking his inner anguish. John King’s clangy, percussive score introduces the ghost of his father, which of course will set Hamlet’s whole revenge plot in motion.

The ghost never reappears, but King’s musical motif for him does, suggesting a psychological take on the play rather than a naturalistic adaptation. Gertrude and Claudius’s wedding celebration has the violent feel of a tribal ritual. And Hamlet’s only joy – captured in a lyrical duet with Ophelia (Heather Ogden) – morphs into turmoil when he realizes she’s been sent to spy on him. Their second duet, with Hamlet flinging and kicking her away, is a powerful marriage of drama and dance.

It’s a shame O’Day’s choreographic inspiration doesn’t stay at this high level. He’s especially undone in the melodramatic (and repetitive) second half. Claudius’s (Jiri Jelinek) guilt-ridden solo feels like a dancer improvising to that famous number from Flashdance Polonius’s (Jonathan Renna) death is merely confusing and the final duel scene resembles a pantomime.

The biggest problem, however, is that O’Day’s Hamlet doesn’t evolve. Without the Bard’s language, he never becomes more than a spoiled boy who’s depressed and angry. Neither O’Day nor Cote renders him noble in his tragic fall.

Still, there’s lots to enjoy in this North American premiere from the National Ballet. Along with King’s rich score, spectacularly played by the National Ballet Orchestra, Tatyana van Walsum’s sets – dominated by bone imagery and full of multiple doors – evoke a world of spying and intrigue.

O’Day’s got lots of talent – the way Hamlet literally treats his friends Rosencrantz and Guildenstern like a pair of dogs is clever – but right now this ballet feels like an early draft of a potentially good work. The readiness is all.