Canada has spent millions stockpiling Tamiflu, an antiviral recently proven to be no more effective than aspirin or Tylenol for flu 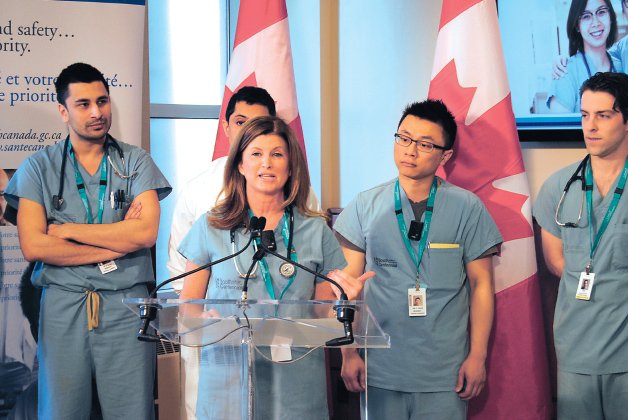 Canada’s minister of health said last week that the government did review drug trials for Tamiflu, an influenza prophylaxis recently found to be ineffective. Yet it remains on our federal pharmacy shelves.

As of 2011, the federal and provincial governments had stockpiled $180-million worth of antivirals, mostly Tamiflu, despite reports of neuropsychiatric adverse events in children, including delusions and delirium.

After touring St. Joseph’s Health Centre on April 10 as “resident for a day,” Minister Rona Ambrose responded to NOW’s question asking if the government undertakes reviews of clinical trials before releasing drugs, specifically Tamiflu, to the public.

“Of course [we do],” said Ambrose. But the data is provided by the drug’s manufacturers and is often biased.

Meanwhile, the Cochrane Collaboration, an international group of academics producing hundreds of systematic reviews of medicine, was locked in a years-long legal battle with the drug’s maker, Roche, over access to trials. Cochrane released its review of the pharmaceutical company’s trials on April 9, saying there is no good evidence that Tamiflu saves lives.

Dr. Peter Doshi, co-author of the report, tells NOW, “The reason [Tamiflu and Relenza were] stockpiled is because they interrupt the transmission of the virus and reduce the amount of people who would be hospitalized or die from the flu. There’s no good evidence that the drugs have these effects.”

Doshi, an assistant pharmacy professor at the University of Maryland, and his 11 co-authors reviewed randomized, placebo-controlled trials from the drug’s manufacturers. Those trials included more than 24,000 adults and children and data from the UK, U.S., Europe and Japan.

According to the UK-funded report, Cochrane reviewed over 100 trials to determine that the drugs’ benefits are “essentially what you get out of fever-reducing medicines like aspirin and Tylenol,” Doshi says.

Dr. Barbara Mintzes from the department of anesthesiology, pharmacology and therapeutics at the University of British Columbia has questioned the efficacy of the drug, noting that its value has been overstated from the beginning.

“This is the first time that the full clinical trial data has been available in order to carry out a full systematic review,” says Mintzes.

“It really raises questions about the decision to stockpile Tamiflu,” she says, “because of the very modest effectiveness on flu symptoms and the lack of evidence from the randomized control trials that it reduces complications and hospitalization.”

Mintzes became interested in Tamiflu while evaluating drugs for the Therapeutics Initiative for BC’s ministry of health. She reviewed both Tamiflu (oseltamivir) and Relenza (zanamivir) in the early 2000s after they first came to the market.

“At that point there wasn’t any evidence of effect on complications of the flu – what you would want from a flu drug,” she says.

For both Tamiflu and Relenza, she says, there is “no difference between the drug and a placebo.”

Despite the U.S. Food and Drug Administration advisory committee on Tamiflu’s findings that the drug’s benefits were overstated, the U.S. Centers for Disease Control and Health Canada approved both drugs for release to the public in 1999.

In 2005, the U.S. FDA advisory committee recommended label changes for Tamiflu. Mintzes explains that Roche was not allowed to “say that it prevents flu complications.” Remember, this is a drug stockpiled to treat the flu.

The professor adds that the government does review pharmaceuticals before they’re released to the market, but the studies it reviews are often biased and the methodologies flawed because the trials are conducted by the drug’s manufacturers.

“Often drugs are approved based on really inadequate evidence,” she says.

The problem as she sees it is with research and publication bias. If the manufacturer is responsible for carrying out the studies and those studies are confidential, it’s in the company’s interest to choose what data to release.

“They’re not always publishing complete information,” she says. This has been at issue in the Cochrane Collaboration’s attempts to see both Roche’s and GlaxoSmithKline’s trial information for Tamiflu and Relenza.

“The methods the Cochrane reviewers have used are excellent,” says Mintzes. “What they’ve done is that they’ve combined all of the evidence from all of the experimental studies that were done of these flu drugs.”

Arthur Schafer, director of the Centre for Professional and Applied Ethics at the University of Manitoba, says there was “no evidence that these drugs were efficacious.”

“It’s an absolute scandal,” he says.

Schafer also pointed out that over a 10-month period from 2005 to 06, the U.S. FDA reviewed 103 reports of neuropsychiatric adverse events – 95 from Japan, many in children.

Sylwia Krzyszton from the Public Health Agency of Canada replied by email to NOW’s questions asking if the agency would consider the findings of the Cochrane review.

PHAC is “reviewing the Cochrane Collaboration’s findings, as well as those from other studies on the issue,” writes Krzyszton. The agency continues to support the use of antivirals during a flu pandemic.

In an earlier statement, Krzyszton noted that the agency closely monitors the scientific literature.

If Health Canada is only looking at the “scientific literature,” then they’re missing the clinical study reports, says the Cochrane Collaboration’s Doshi. “They’re working with short summaries rather than independently vetting the veracity of evidence by looking at the raw data itself.”

Doshi says, “The point here is that the ‘literature’ is a small slice of the evidence iceberg.”

Not to mention the problem of who funds the research.