What's it like being a long shot candidate? The Green party's Daniel Stein discovers on his first foray into federal politics that fear of Harper is like a pox on all our houses – then the money ran out 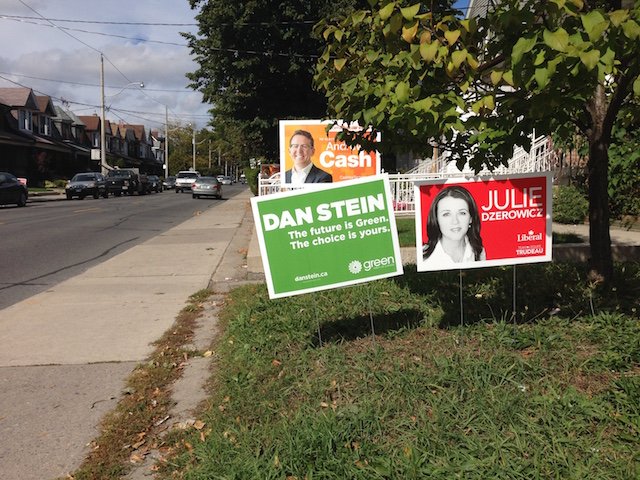 Eighteen months ago, I was looking out a bus window and decided, I’d had enough of my own bullshit.

As a criminal defence lawyer, I’d always seen myself as working for the public good defending mentally-ill people on a Legal Aid budget.

But so much of that was small “p” public interest, not wanting to be bored to death at some corporate law firm.

This time was different. I have a young child. I wasn’t going to sit on the sidelines any longer.  Fast forward a year later, I’m running in the federal election for the Green party in Davenport.

And although we’ve had no-one (other than myself) to work full-time on the campaign, that didn’t stop us from canvassing twice a day.

The experience at the doors has been eye-opening. I have been greeted pretty warmly.

But I heard again and again: “I’d love to vote for you but I can’t, because we have to get rid of Harper.” I got this last year too, when I ran in the provincial election, only then it was Tim Hudak who voters were afraid of.

For many reasons, fear of Harper is like a plague on all their houses.

However, where the riding becomes more ethnically diverse and working class, kind of like what Toronto’s urban core used to be, I got a different response.

I got sign requests and some hugs. I love hugs!

Amidst the cultural diversity, I felt at home. My grandparents, who came from Poland, never learned much English. It was like I had an Aunt Maria around every corner.

I came to think that all it took was to, well, dislodge the conventional wisdom, no small task of course. Then the money ran low.

So in the last few weeks, canvassing has taken a backseat to our five all-candidates meetings, three of them public.

Having vowed not to simply regurgitate our party platform, I ended up boiling over at times.

The Energy East pipeline would proceed “over my dead body,” I said at one debate. I meant it, although even I was a bit surprised at myself. But people who appreciated my honesty approached me or emailed me afterwards with words of encouragement.

With less than a week to go in the campaign, politics for me has become about more than climate change. It has become about recharting a course for our country with bold steps on education, poverty, municipal infrastructure and renewable energy. We can’t do this with Stephen Harper.

Yes, he’s turned his back on the developing world, balked at climate change, and prefers to drop bombs than keep the peace. But we as Canadians haven’t done anything big since the Charter in 1982.