Heat on Wynne to take Feds sex law to court

For weeks, sex workers and their allies have been writing letters, tweeting and phoning, pleading with Ontario premier Kathleen Wynne. 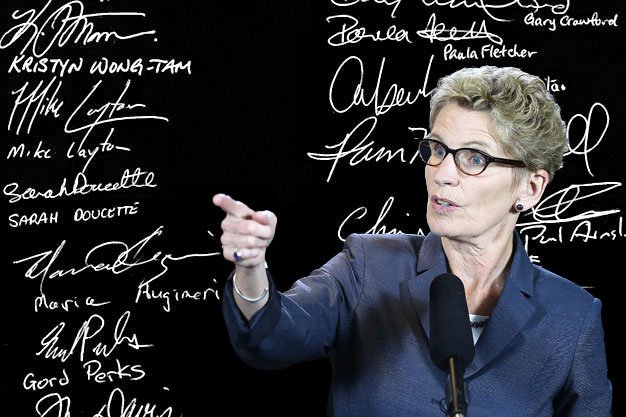 For weeks, sex workers and their allies have been writing letters, tweeting and phoning, pleading with Ontario premier Kathleen Wynne to refer the federal government’s new prostitution law to the Ontario Court of Appeal. And to instruct the province’s Crown prosecutors not to enforce the law until its constitutionality can be tested in court.

On Sunday, December 7, a day after the law was officially proclaimed and women across the country had taken part in ceremonies to mark the anniversary of the Montreal massacre Wynne met those concerns halfway.

The premier announced that she has asked Ontario attorney general Madeleine Meilleur to advise on the new law’s constitutionality and what steps might be taken if its compliance with the Charter is called into question. She stopped short, however, of asking the police not to enforce the law.

The list of those sharing Wynne’s “grave concern” that the Protection Of Communities And Exploited Persons Act will protect “neither exploited persons nor communities” includes more than 100 national advocacy groups, unions, members of academic, political, media and legal organizations, human rights activists, aboriginal elders and elected officials. And it continues to grow.

“As City Councillors, we work to promote measures that increase public safety and that materially improve the living conditions of marginalized residents,” it reads. “In particular, we are united in our efforts to end violence against women. To that end, we strive to identify and correct situations that, however inadvertently, create conditions that are unsafe for any woman. We fear that Bill C-36 has introduced such unsafe conditions into Canadian society, bringing foreseeable detriment and real danger to some of the most vulnerable women we represent.”

It seems to have gotten Queen’s Park’s attention. Councillor Kristyn Wong-Tam, who wrote the letter, says, “If I had more time, and it’s tough to track down all 45 members of council, I would have been able to secure more signatures. That I know. However, I also recognize that our premier needed to hear from us as soon as possible.”

Among the signatories is rookie councillor Jon Burnside, a former Toronto police officer, who says he supports the decriminalization of sex work. If sex work were no longer criminalized, more women would report violence, he says.

“From a law-and-order perspective… trying to control the sex trade is a lot of wasted money and effort. Criminalization puts a lot of people in jeopardy.”

NOW Magazine asked Mayor John Tory if he plans to sign the letter. He promised to read it and consider adding his name, but has since reportedly declined to ink his name without offering further comment on the matter except to say through a spokesperson that he “will respect” the process.

Bill C-36 replaces the previous prostitution-related laws that the Supreme Court of Canada struck down in 2013 in the landmark Bedford v. Canada case.

Three sex workers challenged the constitutionality of those laws, arguing that they put sex workers’ lives at risk by preventing them from working out of their homes and putting in place certain safety measures to screen clients, like hiring security guards. The court agreed. But sex workers’ rights groups say the Conservative government’s new law, which relies heavily on the “Nordic model” that criminalizes the clients of sex workers, puts them in more danger of violence.

Terri-Jean Bedford applauded Wynne for listening to sex workers. In a personal appeal to the premier, Bedford compared the struggle of sex workers to that of same-sex couples. “I know you realize the freedom that you are enjoying in your personal life was once at issue as well and [was] opposed by the same segments of society now behind C-36. And some people would make [it] illegal again if they thought they could get away with it.”

But for some, Wynne isn’t going far enough.

Jean McDonald, executive director of Maggie’s Toronto Sex Workers Action Project, says she would like to see the Toronto Police Services Board (TPSB) agree to municipal non-enforcement of the law until it can be tested in court. Maggie’s plans to announce a campaign to demand police not enforce C-36 to coincide with the National Day of Action to Support Sex Worker Rights December 17.

“There are so many unanswered questions right now,” McDonald says. “We don’t know how this will be enforced or even if it will be enforced. And that is creating a lot of stress and fear. How will it impact massage parlours? Strip clubs? Third parties? Advertising?”

Alok Mukherjee, chair of the TPSB, says the board has no official position on C-36, nor does the Canadian Association of Police Governance, of which he is past president.

He says he plans to canvas board members and discuss the law with Chief Bill Blair to determine its implications.

“While I understand the need to deal with child exploitation and human trafficking, there are people who engage in sex work voluntarily, and they need access to health care and the ability to work in a safe environment,” says Mukherjee.

He says he’s concerned about growing pressure on police to apply criminal laws to largely social issues. He would like to see Toronto follow the lead of Vancouver, which has established its own guidelines for enforcement.

“Those guidelines make a distinction between those cases where people’s health and safety are at risk, as opposed to getting involved where there is consensual sex,” explains Mary Clare Zak, director of social policy for the city of Vancouver.

After the new prostitution law received royal assent on November 6, the City of Vancouver released a statement calling for the law’s repeal, saying it will only exacerbate violence by pushing sex work underground.

Vancouver would know. The city has experienced the tragedy of hundreds of missing and murdered women, many of them aboriginal, and the horror of the Robert Pickton murders. Both have galvanized the city’s sex worker rights movement and influenced public opinion against the feds’ new law.

Zak says all municipalities should take an approach to enforcement that includes the voices of sex workers. “There’s a real need for leadership on this, not just from the municipal government but also from senior levels of government.

“The approach we have taken is one based on human rights, on evidence and lived experience,” she says. “It’s so important that we don’t jeopardize people’s health and safety.”

Zak says C-36 is heading for an inevitable fight at the Supreme Court of Canada, a view widely shared by legal experts. And it has many people thinking the Conservatives intend to campaign for re-election on moral issues.

“[It] really isolates women,” she adds. “How is a woman supposed to come forward to report violence? ‘I sold this illegal service and I was hurt in the process?’ This is a population that is so highly stigmatized already.”