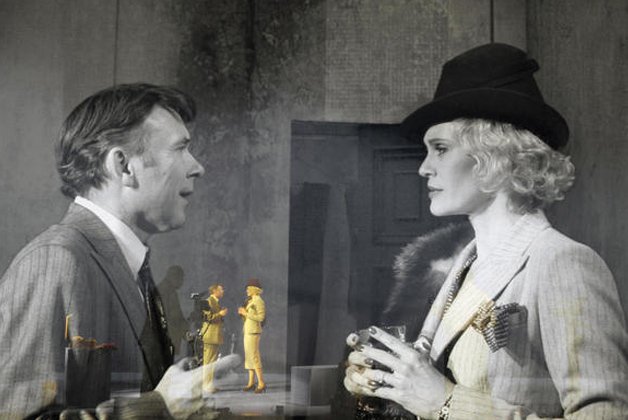 Helen Lawrence is film noir like you’ve never seen it, a blend of virtual reality and live actors that begins promisingly but, as a style, loses its appeal and becomes a gimmick. Happily, the actors are always great.

Devised by writer Chris Haddock and director Stan Douglas, this elegant tale of double crosses, corruption, sensuality and revenge is set in postwar 1940s Vancouver. Crooked policemen (Ryan Hollyman and Greg Ellwand) set two black brothers (Sterling Jarvis and Allan Louis) against each other for the control of a gambling house. Percy, a bookie (Nicholas Lea), shakes down whomever he can while consorting with hotel manager Harry (Hrothgar Mathews).

Add the two women in the brothers’ lives (Crystal Balint and Emily Piggford), the woman who works at the hotel and likes to be called Joe though her name is Julie (Haley McGee), a war vet and his German bride (Adam Kenneth Wilson and Ava Jane Markus) and you have a whole slew of secret-hiding characters. It takes a while to sort out who’s who, but that’s typical of the genre.

Enter the mysterious Helen (Lisa Ryder), who also calls herself Betty, bent on revenge and never showing all the cards in her hand.

The actors work in a blue box behind a downstage scrim, their images reflected on it. The scenery behind them is a series of projections that give strong atmosphere to the story. It’s fascinating for a while, though it starts to feel contrived well before the end.

But the actors are always strong, beginning with Ryder’s cool, flirtatious but no-nonsense Helen, seeking the man who done her wrong. Lea’s Percy is also memorable, mostly in control but always smart enough to look for a way to escape if things go rotten. Jarvis brings strong emotion to one of the brothers, a returned soldier who thinks he’s lost everything to his well-dressed sib.

McGee’s Julie/Joe is a special treat, and the scenes she has with Helen – she’s more than a little attracted to the blond stranger – are highlights: sometimes teasing, sometimes playful, sometimes tender.

You might come to Helen Lawrence for its inventive staging, but when it’s all over, you’ll remember the performances.