Once thought safe enough to drink, the most popular weed killer on earth is increasingly difficult to avoid - and critics charge it's contributing to chronic illnesses 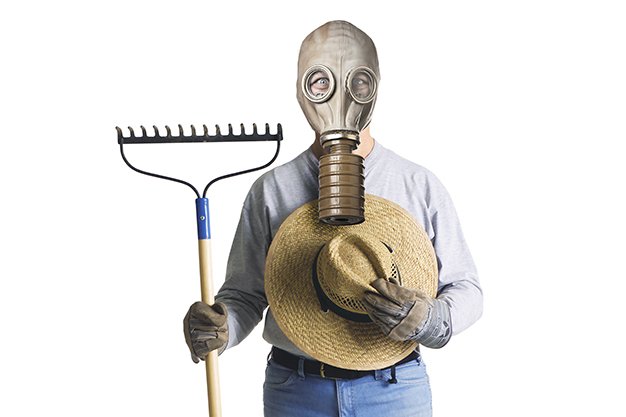 Farmer Tom Slumskie once ended up in hospital on an IV after adding insecticides to the seeds in his planter. That was 35 years ago, and it was a wake-up call.

It made him cautious about using pesticides like glyphosate – the active ingredient in Monsanto’s Roundup – on the 283 hectares he farms in Bruce County.

The bestselling herbicide in Canada and the world, glyphosate was once promoted as safe enough to drink. But some critics are raising renewed alarm. One of them is Thierry Vrain, a plant pathologist and former head of biotechnology with Agriculture Canada, who says there is no safe intake level for this toxic chemical, which appears to be linked to a rising tide of chronic illnesses. Indeed, the World Health Organization’s International Agency for Research on Cancer has just declared glyphosate a “probable carcinogen.” (More on IARC’s study here).

Farmers have used glyphosate to weed Ontario fields since 1978. But the introduction of genetically modified (GM) crops in 1997 – most of them designed to be glyphosate-tolerant – was a game changer. Farmers could now raze weeds with a single blanket spray of glyphosate without killing their crops.

Though industry promised GM crops would drive down pesticide application, glyphosate use has risen dramatically, by some 76 per cent between 2003 and 2008 in Ontario.

That helped reverse a decades-long decline in pesticide use that was already well under way before a single GM plant appeared in farm fields. By 2012, glyphosate had captured almost 53 per cent of the western Canadian herbicide market – more than the dozen next-most-popular herbicides put together.

Farmers are increasingly using the herbicide as a desiccant (dryer) on both GM and conventional plants, making harvesting easier or moving up a harvest threatened by bad weather.

There are no official Ontario data on how widely desiccation is practised, though Slumskie estimates it’s used on up to 15 per cent of GM soy.

It’s increasingly difficult to avoid the most popular herbicide on earth. A recent study of U.S. honey found 59 per cent of samples contained glyphosate. Though a safe glyphosate level in honey hasn’t been determined, recent research suggests the current level of glyphosate exposure in general may constitute a health threat to the population.

You might think organic crops would be free of this chemical, but glyphosate has recently been discovered in samples of air and water, so all food may now be tainted.

Pesticide makers say their products have never been safer, and pesticide residues represent such a minute health risk that people need not worry.

Well, critics disagree. They point to the chemistry behind the herbicide’s action.

Glyphosate was first thought to pose little threat because neither human nor animal cells have shikimate pathways, a metabolic route used by plants and bacteria. Glyphosate does its deadly work by binding to the metal atoms of enzymes in the plant’s pathways, preventing them from producing critical amino acids. Without those, the plant dies.

New discoveries about the human microbiome – including the 100 trillion bacteria in the human gut – are starting to reveal the critical role microorganisms play in promoting human health.

Don Huber, professor emeritus of plant pathology at Purdue University, says that just as it attacks plants, glyphosate can demobilize the bacteria on which humans and animals depend.

But Joe Schwarcz, director of the Office for Science & Society at McGill University, says the theories need to be proven under proper laboratory conditions before they should be believed.

On the issue of nutrition, Schwarcz agrees that glyphosate binds to minerals, which humans and animals need for health. He insists, though, that the chemical is applied in just the right strength to kill weeds but not enough to disable the minerals plants pull up from the earth.

But some studies suggest the opposite is true.

Further evidence might be the manganese and B12 deficiencies often found in the livers of slaughtered animals. Commercial packing houses are said to throw out 80 per cent of their livers because they are so damaged, says Huber.

But another possible health threat is glyphosate’s antibiotic action.

Monsanto patented the chemical as an antibiotic in 2010, a tacit acknowledgement of its effectiveness in killing microbes, though the pesticide industry maintains it’s applied to fields in concentrations too low to produce any serious antimicrobial effects in the animals, including us, consuming those crops. Schwarcz insists the antibiotic effect is “absolutely trivial.”

But Huber argues that increasing miscarriages, birth defects and chronic botulism in cattle, sheep and pigs are signs of glyphosate’s strong antibiotic activity against beneficial organisms.

Backing up Huber, Vrain points to research from 2013 showing that, at a concentration of just one part per million, glyphosate killed all the beneficial bacteria in the guts of poultry. Only salmonella and clostridium survived – pathogens blamed for farm animal illness.

In the meantime, a recently published study by Nancy Swanson virtually twinned increasing rates of glyphosate use with rising incidence of a host of chronic diseases. They include liver, kidney and bladder cancers Crohn’s and celiac disease stroke, diabetes and autism, among others.

Some shrug these correlational studies off as coincidence. But to dismiss them because they don’t prove cause “is a completely unscientific position,” says Vrain. The Swanson study’s close correlations are a hugely strong argument for more research, he says.

Huber goes so far as to call for a return to the precautionary principle until that research is done, but there are no signs of any curbs being contemplated for glyphosate use.

New GM seeds resistant to glyphosate, as well as 2,4-D, are expected to start rolling out across Canada this year. The new seeds will help farmers battle glyphosate-resistant weeds.

While Vrain admits that biotechnology has been transformative for the just over 2 per cent of Canadians who farm, “One hundred per cent of people eat,” he says.

Slumskie remembers when the herbicide atrazine was first introduced years ago. Farmers started applying it at 2 pounds per acre, which soon ballooned to 8. Nearby rivers became badly contaminated.

“Now here we are with glyphosate, 40 or 45 years later, and the same thing is going on,” he says. “History will repeat itself when the lesson is never learned.”

Michelle Adelman writes on environment and health issues. She’s a graduate of the Munk Fellowship in Global Journalism at the University of Toronto.