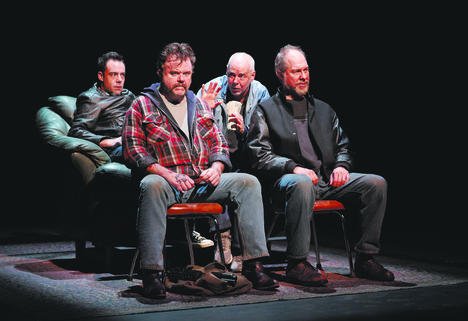 Four addicts plan the perfect heist, an ATM scam that involves, surprisingly, giving money back to a human teller.

Stuart Hughes shines in directing all-male casts (The Odd Couple and American Buffalo), where contrasting levels of testosterone help drive the narrative. This production has a sharp-edged, dangerous quality that’s non-stop. An occasional touch of warmth wouldn’t hurt, but the comedy’s still strong, in part because of solid ensemble work.

Hanrahan’s Bug is the kind of scary person for whom a daily killing is the equivalent of popping a morning vitamin, while Ross’s Billy draws you in even though you know he’s pulling a scam. Matamoros’s Dick cleverly manipulates his partners in crime.

Dennis’s skittish Donnie is an entertaining combination of self-involvement and consideration for others he steals wallets to take money from an ATM, but afterwards puts them back because he knows how troublesome it is to replace ID cards.

The play’s climax, set in a crowded car as the four wait to bring their scheme to fruition, is comic gold, though the next scene’s writing isn’t as powerfully focused.