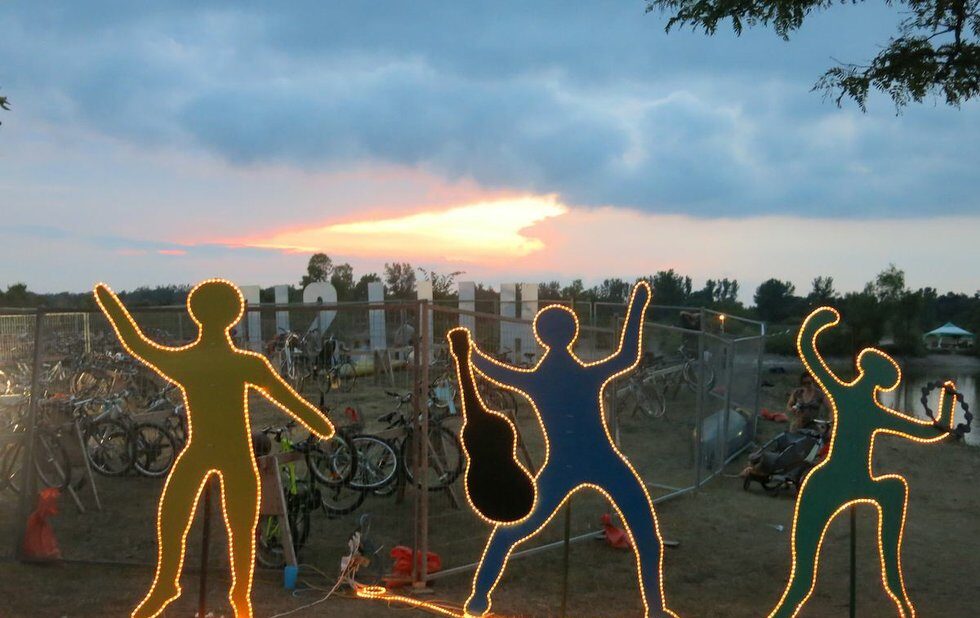 You hear those words in the parking lot, upon entering the Island and practically every time you walk into a tent, often accompanied by high-fives from volunteers. Guelph’s Hillside is a brilliantly programmed music festival, but it’s much more than that.

For 33 years, it’s been a shared experience, a celebration of community, a little slice of bucolic heaven where you can eat good food, swim in Guelph Lake, camp with friends, run into people you haven’t seen in ages, make new friends, discover new artists, take a workshop on essential oils and never have to see any corporate logos.

But something was different this year. Though the tent stages were packed for bands like Suuns (who played Saturday night), the ever-popular Sunday Gospel Session and the Sunday closing set by butt-kicking Canadian icon Buffy Sainte-Marie with the Sadies, overall the crowds seemed smaller.

The reason: Wayhome Music and Arts Festival, two hours away in Oro-Medonte and on the same weekend. Now in its second year, it dwarfs the Guelph mainstay in both size and budget. WayHome can accommodate 40,000 people Hillside, at sell-out capacity, can manage 5,000 a day. This year, only about 3,500 people attended, roughly 1,500 under capacity.

“Last year was the first time that we didn’t sell out our weekend passes since I don’t know when,” says Baijal. “Mind you, we increased our numbers of weekend passes over the years because more people wanted to come for the weekend.”

In response, Hillside has decided to move from the fourth weekend in July to the weekend of July 14-16. This puts it on the same weekend as London’s Home County and Northern Ontario’s River & Sky, as well as the end of Quebec’s Festival d’été and Ottawa’s Bluesfest.

“The idea of changing the date actually came up two years ago,” says Baijal. “We realized, “Oh, [WayHome] could be a major thing to have to reckon with because their programming is in our wheel house. If we would have done it for this summer, I think we would be in a different situation.

“When I pushed for us to change the date, I did as much homework as I could to make sure that we weren’t going up against something else or stepping on anybody else’s toes. [Mid-July] was the weekend that made the most sense. Cause you don’t want to go any later – August is a crapshoot.”

Baijal has nothing against WayHome – he considers it a unique event with an experiential, artistic angle to it. “At least they are doing something that isn’t exactly like everything else that is popping up in the region.”

Besides, WayHome and Hillside are two very different things. Baijal says Hillside is in line with progressive festivals built on the folk festival model.

Ironically, Arcade Fire – who headlined WayHome this past weekend – helped grow Hillside’s profile and popularity in the mid-aughts. The Montrealers played Hillside twice: once on the Island Stage in 2004 and again in 2005, when they famously closed the fest with a nighttime procession off the Island with the entire audience in tow. Post-Arcade Fire, Hillside began to sell out in advance before it even announced its performers.

“From 2005 through 2012, [Hillside] sold out completely in advance,” says Baijal, “and the weekend passes were selling out every single year up until 2014.”

But the challenges are about more than WayHome.

“You and I both know that there’s a ridiculous number of festivals happening in Southern Ontario, Toronto included,” says Baijal. “Nobody is selling out anything. As far as I’m concerned, the WayHome festival, with the programming they’ve got, that thing should be going clean sell-out but it’s not. Same reason: [the market] is too diluted.”

In addition to the date change, Baijal says there will be some other minor adjustments, including a reduced number of acts and more workshops. [For the uninitiated, workshops are sets in which various artists and bands share the stage – Hillside is very good at these.]

“We definitely want more people there, but it doesn’t need to be jammed,” says Baijal, who expects to see the numbers go up again next year. “One of the things we’ve discovered in the last few weeks, right through to this weekend, is how many people really care about this event.

“There’s a comparison being made between something as large as WayHome [in a recent Toronto Star article] and Hillside, which is this little thing. So it’s quite humbling in a way. People care about Hillside and they don’t want to see it go away.”