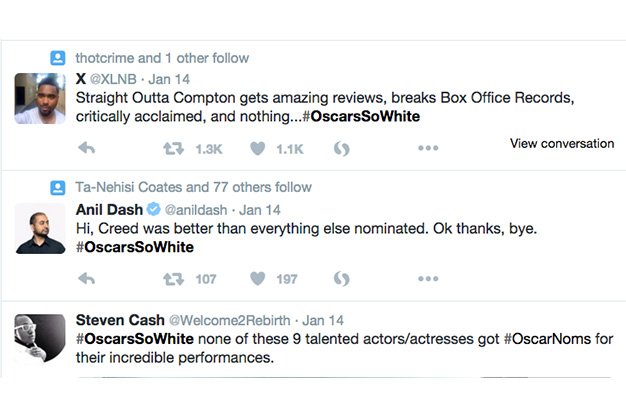 Two years ago, at the 86th Academy Awards, Lupita Nyongo won best supporting actress for 12 Years A Slave a film that is specifically and profoundly about Americas ugly historical relationship to the African people.

The film also took best picture and best adapted screenplay the awards were accepted, respectively, by director Steve McQueen and screenwriter John Ridley, who are both black. McQueen did not win the Best Director prize that went to Gravitys Alfonso Cuaron, a Mexican who now lives in London.

The idea of these specific prizes being a victory for black or Latino people or even an acknowledgement of race is laughable. 12 Years A Slave and Gravity were simply two of the best movies of the year. One of them featured a racially mixed cast and confronted racial issues head-on the other featured George Clooney and Sandra Bullock in space, and the ethnicity of the guy behind the camera was not remarked upon.

When the 88th annual Academy Awards nominations were announced yesterday, it didnt matter that first wave of announcements was made by Ang Lee, a Taiwanese person, and Guillermo Del Toro, a Mexican who now lives in Canada. The absence of people of colour in the four acting categories and the absence of films like Creed or Straight Outta Compton in most other categories, including best picture was perceived as a deliberate rejection of minority talent. The #OscarsSoWhite hashtag started trending again on Twitter.

Calling out institutions for their exclusions is always a good idea. But its not like the Academy will rescind its nominations and roll out a new set thats more representative. If any change is going to happen, aside from Chris Rock making a couple of jokes about it in his opening monologue, well see it in next years contenders. Or we wont.

The problem, at its root, is that the minority demanding representation is always interpreted by the majority as an imposition of quotas. Its like that well-meaning older relative who wonders why youre offended when he asks whats wrong with all lives matter he doesnt want to think that he himself might somehow be excluded from the conversation if things take a turn, not realizing that this is exactly how the Black Lives Matter organizers feel all the goddamn time.

Anyway, he says that and then the conversation stops being about institutional racism and pivots to his specific issues, in much the same way that any discussion of dealing with terrorism in the middle east is instantly derailed by someone saying that all Syrian refugees are secretly ISIS operatives. Its stupid and misinformed, and we have to stop and deal with that instead of having the real conversation about geopolitics and enlightenment we so desperately need to have.

My point here is that the Academy Of Motion Picture Arts And Sciences is never going to get to the point where it consistently nominates people of colour on a scale commensurate with their presence in the industry not because of racism, but because of the inherent privilege of the established white talent base. The Academy will always gravitate towards white stars, because the white stars vastly outnumber the stars of colour.

It will take decades before that balance even begins to equalize, and any nominations for people of colour will seem like tokenism until then and thats an insult to the individuals whose work is now framed through the prism of race. Even now, the 2002 best actor and actress wins for Denzel Washington and Halle Berry are marked with an asterisk: oh, right, that was the year Hollywood paid attention to black actors. Never mind that Washington and Berry acted the shit out of those parts somehow that doesnt matter.

If Leonardo DiCaprio wins for The Revenant, people will say as they have been for months that this was his year, that hes due. If an actor of colour wins, its about representation. Thats the advantage that white performers have: an award is a personal acknowledgment, not a nod to the race. What the Academy doesnt realize is that every award to a white performer is an inherent reinforcement of the status quo and that not even considering an alternative to the status quo is itself an insult to the thousands of people of colour working in the industry.

An Oscar is just a statue an industry prize thats somehow attained the status of a papal benediction over the decades but the scale and the nature of the entertainment industry means its the most valued statue on the planet, and actors and filmmakers of colour should be able to believe they have as much of a shot of winning one as the pale person sitting next to them at the audition.

Lets look at a minority talent who did get nominated: Alejandro Gonzalez Inarritu, the Mexican filmmaker behind The Revenant. Not only did that film rack up the most nominations of any project this year 12 in all, including a nod for Inarritu himself as best director but it did so a year after Inarritus Birdman won four prizes, including best picture and best director.

These nominations arent perceived as a triumph for Mexicans or Latinos theyre rightly seen as a triumph for Alejandro Gonzalez Inarritu. He doesnt represent anyone but himself. Thats partially because he never stops telling people what a singular genius he is, but if delusional self-aggrandizement was a crime Quentin Tarantino would be in prison for life.

And now lets consider Michael B. Jordan, the star of Creed. Yep, hes black. But hes also phenomenal in the role of Adonis Johnson, the illegitimate son of the late Apollo Creed and heir to the Rocky franchise. Hes charismatic, self-aware, focused, sexy, funny, vulnerable, triumphant and that movie will do for him what the first Rocky did for Sylvester Stallone. It introduces Jordan to a massive audience, positions him as the star of a beloved franchise and gives him visibility within the industry. Would an Oscar nomination be any more of a validation than the movies box-office and critical success?

Of course it would. Its an Oscar. And the fact that the only nomination for Creed went to Sylvester Stallone wholl probably win for reprising the role of Rocky Balboa in a supporting capacity is seen as a snub to both Jordan and director/co-writer Ryan Coogler, who are probably as responsible for the quality of Stallones performance as Stallone himself.

The Academy doesnt see it that way, of course. Stallones award is a career topper hes been nominated before, everyone loves Rocky, its a great performance in a good movie, hes due. They see Stallone as an individual. Its his turn, just like its Leo DiCaprios turn.

So, heres the question: will it ever just be Michael B. Jordans turn? Will Viola Davis ever be due? How about Zoe Saldana (so great in this years overlooked Infinitely Polar Bear) or Idris Elba or Ryan Coogler or Ava DuVernay or Omar Sy or David Oyelowo or Gugu Mbatha-Raw or Said Taghmaoui, or any of the thousands of other gifted actors and filmmakers of colour who are probably really tired of hearing themselves referred to that way rather than just as actors and filmmakers?

I believe it will. I just wish I believed itd be soon.