Support is key to the well-being of trans people 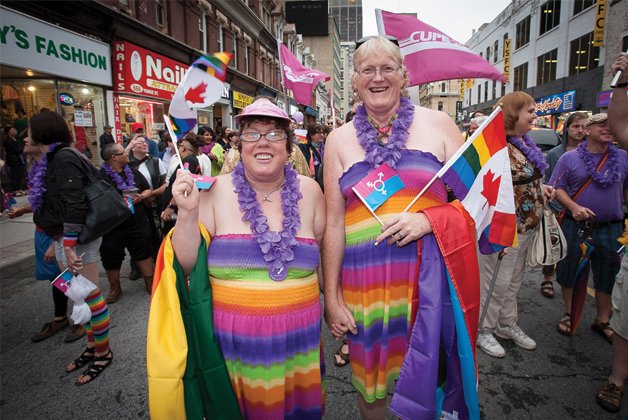 I asked a gay co-worker if she thought coming out was still a huge issue, and she said, “No. Not as gay or lesbian. But a group that still has a lot of issues on a lot of levels is transgender people.”

It’s true. There is a lack of support for those who wish to change gender – or just to live somewhere on the spectrum between male and female.

The term “transgender” covers a large group of people “whose gender identity, expression or behaviour is different from those typically associated with their assigned sex at birth,” according to Transequality.org. Trans people may take hormone therapy or not. They may have surgery or not. They may ask you to use a new name and/or pronoun when referring to them.

Whatever the case, lack of understanding or awareness can make getting access to proper care a pain. And the situation can be stressful for both trans people and friends and family, who might not know how to react.

Just be supportive. It’s all anyone asks. Here’s a closer look at some of the issues.

“One of the biggest challenges is that a lot of health care providers know nothing or very little about trans health. Doctors will say, ‘Why don’t you go see an endocrinologist for your hormone therapy, and I’ll take care of the rest of your health.’ There’s no reason for people to wind up at an endocrinologist’s by default. Hormone therapy should be part of primary care. Trans care is not specialized care. Other people can show support by generally being affirming of a person’s gender, whatever that looks like – if they need to go get [different] clothes or a shaving kit, for example. For parents specifically, I would put the emphasis on showing support for trans children and not mourning. No one has died.”

“Getting a job is harder, particularly for male-to-female trans women. As a trans guy, I’ve seen myself gain male privilege since I started transitioning, something I didn’t have when I was seen as female. A lot of trans women are losing that privilege. Many workplaces don’t know how to accommodate you, and the chance of losing your job is high. Simple things like using the washroom become a major issue because some people are uncomfortable with M-to-F trans people using women’s washrooms. Anxiety over using public washrooms can lead to kidney problems. When it comes to surgery, in Ontario you go through CAMH’s Gender Identity Clinic. But it’s still seen as a disorder. It used to be called gender identity disorder now it’s body dysphoria. It has an impact on your mental health when you have to keep proving you have this disorder to get access to surgery.”

“Lack of access to the transition care needed by each individual in terms of hormones or procedures is a serious threat to mental health, causing depression and anxiety. We’re stuck in a horrible trap: in order to access transition medical care we have to convince someone that we have gender dysphoria, and on the other we also have to convince them we’re sane. So, we have this ridiculous Catch 22. Support is absolutely crucial. The suicide rate among young trans people without support is extremely high, but with support the rate goes down by 93 per cent. Family and friends don’t have to be perfect or get every detail right, but you do have to care, and if you want to focus on getting one thing right, get the pronoun right. Don’t make assumptions about how someone identifies. If you need to ask, ask. Or use ‘they’ for everyone. Families, parents and partners of trans people need other families, parents and partners of trans people. Peer support is infinitely more effective than the best therapy in the world.”

“One study shows that trans people have higher levels of cortisol than the average person, so stress management is very important. Botanicals that support the health of the adrenal system – the hormone system that responds to stress – include Rhodiola, ashwagandha and holy basil. Then there are combinations for adrenal support. Those are safe with estrogen and testosterone and can actually support the body all over. Usually they’re taken as pills in the morning, because our cortisol levels are highest in the morning, slowly go down during the day and rise again at night. Meditation and therapeutic massage can help manage cortisol. Exercise can increase it in the short term but decrease it in the long run, especially low-impact exercises like yoga and Pilates. Getting eight hours of sleep is surprisingly important.”