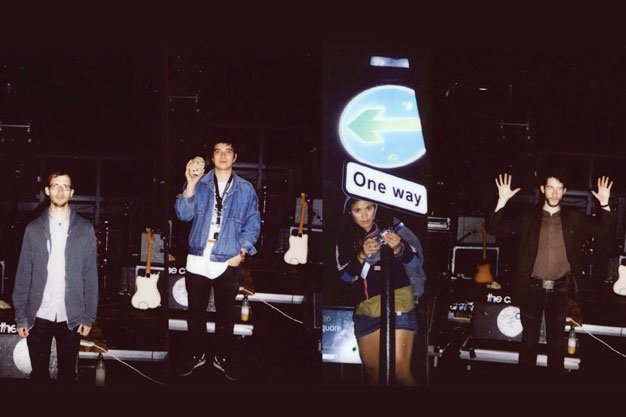 Hooded Fang aren’t exactly sure what the songs from their upcoming fourth album are about. Not because they’re tackling complicated subconscious desires, but because at the moment the lyrics are still just placeholder syllables that Daniel Lee has been mumbling as they fine-tune the arrangements and record the instrumental bed tracks.

“I think he’s going to get drunk tonight and try to make stuff up,” bassist April Aliermo says, showing little concern that the batch of new songs they’ll be playing on tour in less than a week are still so unformed.

“Dan likes to work really fast, and he somehow found us three other crazy people who are up for it.”

It’s been a year and a half since the last Hooded Fang album, but Lee and Aliermo haven’t exactly been slacking off: between the two of them they’re involved in at least four other projects, including Phèdre, Lee Paradise, Tonka & Puma and Hut.

Maybe it’s the influence of those other artistic outlets, or possibly their much-needed summer vacation in Berlin, but the new Hooded Fang songs are very different from the jangly lo-fi garage pop of their last album, Gravez.

When Aliermo asks Lee if he thinks it has anything to do with the music they’ve been listening to lately, he responds with a laugh: “I only listen to dance music. Really fast dance music.”

You can hear elements of that current obsession in the new songs: aggressive ghettotech beats as well as the techno influence of their time off in Berlin. The difference is that those minimalist rhythmic concepts are translated for the instrumentation of a rock band rather than for drum machines and synths. Hints of surf rock are still mixed in, but now the bass lines and drums are the focus.

If you’ve been following their side projects, this direction isn’t surprising, but it’s still an abrupt shift from the last Hooded Fang release. They’re not worried about how their new sound is going to suit their upcoming shows opening for Britpop legend Johnny Marr.

“Whenever someone asks him what he listens to now, he asks his daughter Sunny what’s good,” Lee explains. “I’m pretty sure he just asked her who he should tour with in Canada, and she suggested us.”