A guide to Hooded Fang’s Toronto 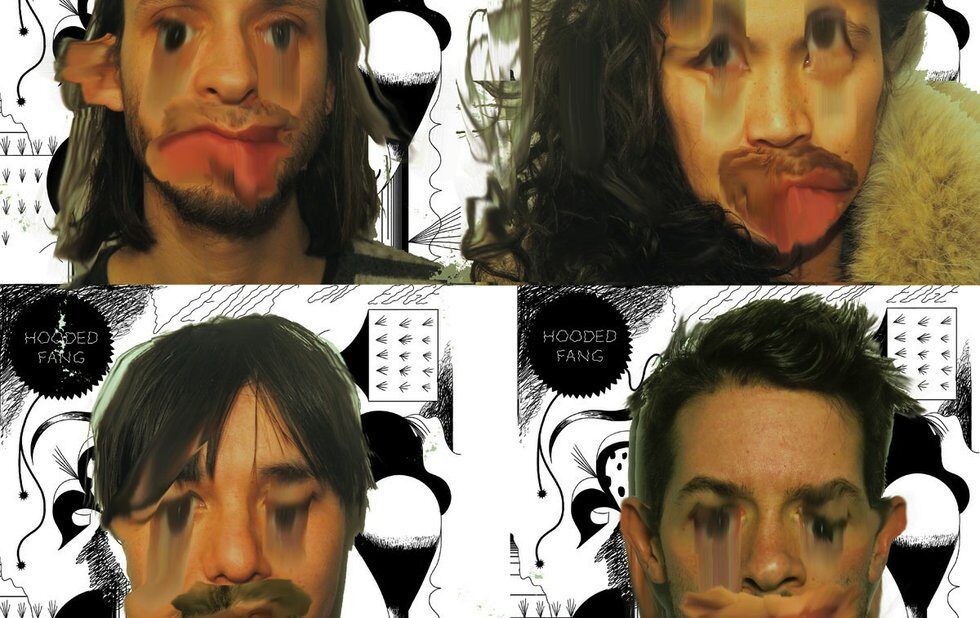 Toronto played a big role in the making of Hooded Fang’s excellent fourth album, Venus On Edge (DAPS). Bassist April Aliermo and singer/primary songwriter Daniel Lee walk us through some of the spots they frequented.

Pouria [Lotfi] owns this coffee shop/bar. He regularly hires visual artists to paint massive pieces for the facade. Our friends Ammar, Amir and Mounir work there, so it’s a great spot for us to take coffee, beer and conversation breaks. You wouldn’t know it by looking at the simple set-up, but Pamenar has an extensive beer and tea list, and on Tuesdays Pouria makes beef tartare. Sometimes, like while writing lyrics, April will sit here alone with a drink, taking two hours to write four lines.

This music store usually has everything we need, from pedals to guitars to gear repair to knowledgeable yet unpretentious people happy to help a clueless customer find the perfect synthesizer. Over the years, Michael le Riche (Fake Palms) has helped April achieve her desired bass tones. She ended up buying a beautiful Gibson amp that we used on parts of our new record.

This has become one of our favourite pizza joints. The dough is not too thin or too thick, there’s a good amount of cheese and it’s still only $3.50 – HOW IT SHOULD BE!

This Kensington bar has stools, booths, couches and a patio, so you have different seating choices for your mood. There’s a good selection of beers and some fancy ciders. Usually we drop in for a break to say hi to our pals, and we tested the new album’s mixes here. Shoutouts to Scott Hardware, Ice Cream, B-17, Hugh, Robbie and Z!

April’s cousin Jodinand Aguillon runs this amazing store of vintage fashion. We drop in for conversation and snack breaks – it’s motivating to be around Jodinand because of his creative ideas and work ethic. He has a prize-picker’s eye and has styled April on many last-minute occasions. Jodinand is the founder/artistic director of HATAW, a Filipino dance troupe that performs a modern take on traditional Filipino dance and costume.

Dundas and Bathurst has a solid array of food stalls made from shipping containers. Our favourite is Kanto. Often you’ll find the lola there (“grandmother” in Filipino), speedily and impressively taking orders, preparing food and serving. Daniel likes to get the tapsilog with atchara, a Filipino breakfast (marinated beef with garlic rice topped with a runny egg and a pickled papaya slaw).

Ryan Tong, the singer of S.H.I.T., opened this space a year and a half ago. It’s part subversive underground punk record shop, part venue space and part community gathering hub. It has nothing to do with Venus On Edge, but it’s one of the most inspiring places in Toronto we’ve been to in a while. Scott Jenner (VCR, Conman) introduced us to it and to [punk promoter] Greg Benedetto. Ryan, Scott and Greg are community-driven, super-DIY, ensure representation from marginalized voices and make badass music.

Ian Gomes runs this fabulous recording studio in the east end with Leon Taheny and Chris Stringer. They built it from scratch. We did the final mixes and mastering with Ian here. He’s worked in some capacity on the last three Hooded Fang records and is sweet, easygoing, attentive and talented. And his snack break habits are on par with ours.