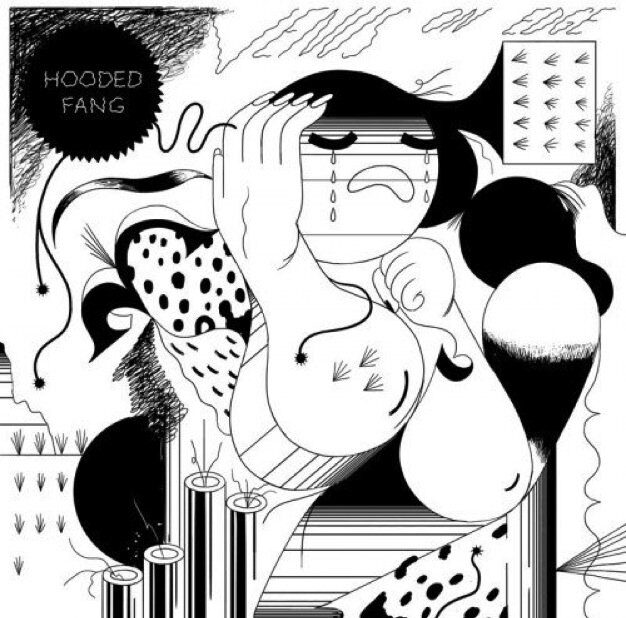 Toronto’s Hooded Fang have gone through several incarnations since their formation in 2007, including a sprawling orchestral indie pop outfit full of cheery handclaps and glockenspiel adornment. These days they’re a cool four-piece still led by primary songwriter/singer Daniel Lee and bassist April Aliermo (Lane Halley is on guitar and D. Alex Meeks on drums) that delivers an agitated and notably surfy take on post-punk.

The gap between Venus On Edge and 2013’s Gravez can presumably be blamed on Lee and Aliermo’s non-Hooded Fang projects: the hardcore-ish tonkapuma, the electronic-minded Phèdre (who have already released a new video in the one week since this Hooded Fang album was released), Lee’s solo project, Lee Paradise, and the lo-fi HUT. Then there’s Aliermo’s social activism work (including kick-starting the national conversation that’s led to Viet Cong’s name change).

Hooded Fang’s fourth album, meanwhile, is out on the pair’s Daps Records, and it effectively balances a jagged tenseness with a sense of fun that comes in part from Lee’s casual vocal delivery. Even when singing about the condo development takeover in Toronto (Glass Shadows), white privilege (Shallow) and our wasteful lifestyles (Dead Battery), he sounds more ticked off than angry, or maybe just matter-of-fact. The consistently and superbly catchy melodies also prevent things from ever boiling over.

Yet the overall impact is still explosive. Songs have a quick pulse and careen forward with controlled abandon. Siren-like, dystopian guitars surge behind trashy, clanging drums and grounding bass lines. Impressions is the least offbeat of the lot, with a widescreen, uplifting chorus and gorgeous melodic shifts that hint at mass appeal potential. It does end in a tangle of distorted chaos, though, as if to stamp out any suggestion of such a thing.