Horror on the Hill

I'll never forget the sound, like the dark and vicious version of a melody you can't get out of your. 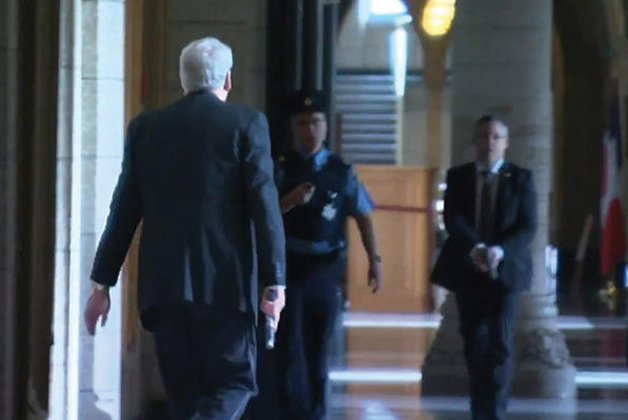 I’ll never forget the sound, like the dark and vicious version of a melody you can’t get out of your head.

The gunshots explode with a shocking ferocity just as a Parliament Hill security guard barges into the Railway Room, where we hold our weekly caucus meetings. He hurries to lock the door and presses his body against it like a human barricade. Everything else seems in slow motion.

We’re all looking around, confused, half standing. I’ve never actually heard gunshots before, so this could be anything, right? But there is the yelling, too, a lot of it.

That may be a common sound on the floor of the House of Commons, but it’s one you never hear in the halls of Parliament.

And it’s that more than the gunfire that signals to me something is seriously wrong just outside the door in the moments after Michael Zehaf-Bibeau shot Corporal Nathan Cirillo standing guard at the War Memorial on October 22 and then headed into Parliament with his shotgun, presumably in search of more targets.

Some MPs had started barricading a side door to the room with tables. Then BANG, BANG, BANG, a long series of gunshots.

Now we’re all down on the floor and very, very quiet. There are some muffled sobs.

Someone gets up to turn off the microphone we use in our meeting, lest it broadcast any sounds that can be heard outside the room. Another simply doesn’t get on the floor at all until others become adamant.

I look across the room for my colleague MP Lysane Blanchette-Lamothe (Pierrefonds-Dollard), who had only minutes earlier introduced her newborn to the NDP family. I thought she had a stroller with her, but now I can’t see that or her across the room.

No one is wired for this kind of thing. This isn’t part of the MP orientation after you get elected. In fact, we’ve never even had a fire drill.

What we do have, though, are stoically efficient, brave and professional security staff. Ours, Alain Gervais, finally moves away from the door, which we discover the next day was hit by gunfire, and tells us to get up very quietly.

Our leader, Tom Mulcair, who has been down against the opposite wall, makes a beeline to thank him, shakes his hand, and now we’re all moving to an adjacent meeting room connected by a different door.

In the few second’s walk into that room I text my wife: “If you heard there was trouble in the House today, don’t worry. I am fine. Someone was shooting up the place – for real!! Anyway we are all ok.”

I spoke too soon.

In this room another guard tells us that we have to go “as quickly and as quietly as possible” down the hall that connects the House of Commons with the Senate and get out through the Senate exit. This is for real? It is.

The entire NDP caucus, our leader and some staff – more than a hundred of us – take off down the hall. At the end another guard directs us down the stairs toward the exit. You’re not thinking at this point. You’re just moving, trying to get as far away from the source of that awful sound.

But as we get to the Senate door, a guard is in the process of shutting it. We tell him, “No, we’ve been told to go out this door.” So he opens it up and we’re out.

But this immediately doesn’t feel right. We aren’t met by anyone on the other side. There doesn’t seem to be any plan now. In fact, as I look back there are only about 15 of us outside, and the door is now closed. What happened to the rest? Confusion.

Now that I’m out of the building, I start to feel fear for the first time.

They have no sense of what’s happened. But really neither do we. Some of us make our way to the sidewalk as police tape is being wrapped around the War Memorial. Unmarked cars with sirens, ambulances, Ottawa police and various other military and security personnel are piling into Parliament. It’s sunny and mild, a classic fall day in Ottawa, except that everything’s been turned upside down. In the days and weeks to come details of what happened will emerge and we will start trying to make sense of this. No doubt a debate will ensue but as we move forward we must continue doing the hard of work of ensuring Canadians’ safety while guarding our shared values of freedom, tolerance and an inclusive democracy.

But right now people are standing around stunned, unable to comprehend what this moment is and what to do, how to act or where to go, none of us realizing as we stand between the War Memorial and Parliament Hill that there is a young soldier lying dead at one and his killer dead at the other.

Don’t miss: Reflections on a violent day in Ottawa