It was a very restless crowd of Ontario New Democrats at the Metro Toronto Convention Centre on Saturday, November 15,. 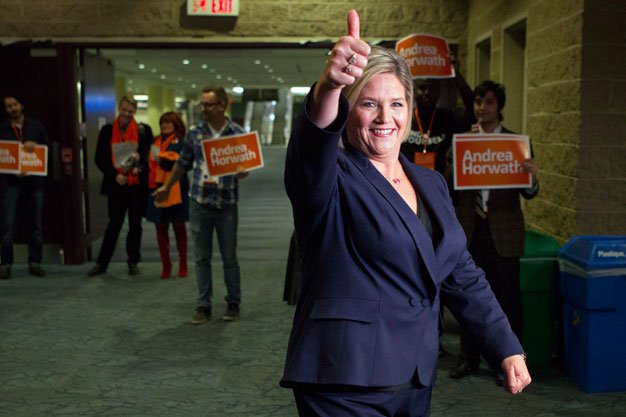 It was a very restless crowd of Ontario New Democrats at the Metro Toronto Convention Centre on Saturday, November 15, who handed Andrea Horwath four more years at the partys helm.

At a convention that found myriad ways of expressing its disdain for the partys deliberately non-aspirational election campaign, arguably one of the worst the ONDPs ever run, the decision to give the leader 77 per cent approval was truly extraordinary and charitable beyond reason.

NDPers are the most trusting and forgiving of people, it seems. Not many leaders get second chances of this magnitude.

After pumping tax phobia in a narrow-casted campaign devoid of appeals to the public good and stunningly focused on a minor hydro fix, Horwath gets a refreshed mandate.

How she engineered this transformation from taxpayer populist to chastened social democrat will no doubt serve as a model for other pols who stray too far from their base and then need an appropriate climbdown.

But the ONDP leader had some special things going for her: an incredibly well-oiled machine, a conversion narrative, her own general likeability and the advantage of being a statistical rarity in her caucus. Of 21 members, only five others have had more than five years experience.

The law of politics dictates that when theres a vacancy, someone will fill it, so who knows who might have stepped forward if NDPers had been up to some experimentation, which they werent. Perhaps they truly believe in fresh starts, or perhaps theyre demoralized.

Still, Horwath and her team have had to work for their redemption. Theyve spent several months attempting to get out in front of the recriminations, from the campaigns minimalist pitch, to the ultimate loss of three precious Toronto seats and the balance of power at Queens Park.

At provincial council in September, she recommitted to the principles that are our hearts and souls. And now she effortlessly slips into self-criticism, as she did this weekend, telling the press with her usual verbal economy that the party failed in June to talk in the big-picture language.

But while things ended well for Horwath this weekend, it feels like it was by accident.

The convention was a sea of writhing anger and discontent, and volatile from the first moments. Soon after the call to order Friday afternoon, a motion from the floor demanded that the vote on Horwaths leadership, which was to follow her 9:25 am address Saturday, be put off until 5:30 pm to provide time for reflection and avoid being stampeded.

The speech itself was no rhetorical feat, but it fortified her conversion project. Those assembled were present, she said, to re-affirm a cause the great project of social democracy…. We owe the generations to come a socially and economically much more equal society.

In any other context, this would have been a rather typical NDP recitation of concerns. Her remarks touched on climate change, a living minimum wage, the creation of a value-added green economy, better childcare, violence against women, and the poor and excluded. The intention was obviously to signal that Horwath was done limiting campaign pitches to small out-of-context deliverables, and that she recognized this as a party of major principle.

A very unusual pledge, actually, election strategy being typically the monopoly of the leaders inner circle and subject to polling and other attempts to divine the source of new votes. Think of it as a marker of how far Horwath felt she had to go.

Still, the speech was unsettling in many ways. One had to appreciate the attempt at vision, but there was a background tape playing in my head, and it was snickering all the way through.

The leaders interest in climate change only reminded me how non-existent the issue was in her election messaging just months ago. As it was, the convention featured an address by Kelsey Mech, national director of the Canadian Youth Climate Coalition, who threw out a challenge to the room: we need a substantive plan on targets, renewable energy projects and a no to pipelines, she said. Are you that party? That question is unfortunately not easily answered.

As to the part of Horwaths speech trumpeting Thomas Mulcairs new universal, low-cost daycare policy, well, I couldnt suppress a Youre kidding.

ONDP electioneering made no call for a Quebec-style solution, but argued instead for $100 million to restore childcare centres on the brink of closing a drop in the bucket in a province where childcare for toddlers costs nearly $1,000 a month.

Come to think of it, there was no mention of pensions in her roll-out of everything she thought the party would appreciate hearing or is that issue now permanently tainted by Kathleen Wynnes plan and left to her devices?

Delegates chose to forgive, but many of them were far from forgetting.

This was surely the meaning of a resolution originally signed by five riding associations, and heartily endorsed at the convention calling on the party to refuse to echo or fuel the anti-tax or anti-spending messages of the right, and to popularize a vision of a better world for all.

As one delegate told the room: When the Liberals were accused of overspending, we said we should spend less. If we are the real progressive party, we have to earn it. We have to tell people what we are for.

Good advice, but some of the partys media handlers didnt seem to get it. I only learned the wording of the above resolution because I pulled a mild tantrum and one of the officials felt pressed to give it to me, warning me not to show anyone else in the press section. Party officials dont allow reporters to have resolution books, and while a few motions were presented on video screens, most were not. (When a kind delegate offered me the book, I made the mistake of sticking it in a folder instead of burying it in my bag. Bad idea. One of the handlers spotted it and asked me to turn it over like it was contraband.)

Of course, I understand why Horwaths team was hyper-alert unease was seeping out everywhere. The provincial secretarys report, usually a routine affair, provided an opportunity for delegates to complain about the handling of the election. And the emotional tribute to fallen MPP Peter Kormos praising his militancy was the occasion for comparisons between gutless electioneering and commitment to principle.

There was also push-back on a resolution one of a number turned back for vagueness stating that social assistance recipients ought not to end up with less money after implementation of the Liberals Social Assistance Review. Barry Weisleder of the Socialist Caucus took party election strategists to task for failing to propose raising the meagre assistance rates, and offered an amendment to restore the rate structure as it was before the Mike Harris cuts. While the Socialist Caucus is far from an influential force in the party, members saw things his way and backed his motion.

Meanwhile, a resolution for a decent minimum wage (unspecified) was cause for the airing of more bad feelings about the partys election platform choice of $12, a deliberate rejection of the $14 campaigned on by the labour movement.

Organizers obviously hoping to keep the temperature down slotted the address of fiery OFL president Sid Ryan for early Sunday morning. He skewered the party for its minuscule vision in the last election and reminded delegates that in the Bob Rae era, the ONDP put forward substantive issues like public auto insurance and rent control and still won a majority government. His big ticket items for the party in its current doldrums included pension reform, higher minimum wage and free university tuition. Dont be afraid of the voters, he said.

In the end, its hard to believe that party strategists are really kissing Horwaths retail politics goodbye they just had so much hope for it.

But the leader newly remandated with conditions attached now has promises to keep. She breathlessly sketched out a trajectory for the next four years until the taking of provincial power, that is: a return to building riding associations and relations with municipal leaders, community activists, equity-seeking groups and First Nations.

Its a wonderful direction, though perhaps a tad late lets be frank. But given the current shape of things, what choice does the party have? At this moment, going left, it appears, is all thats left.