Barbecue season means hauling out the propane tanks and Kiss The Cook novelty aprons. But for more patio time or if you tend to briquette any steak you touch, these T.O. eateries fire up the outdoor grills and patio-side BBQs so you won’t have to. 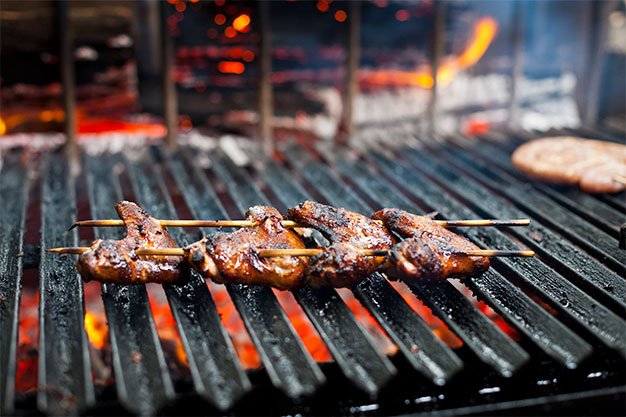 Anthony Rose’s conversion of a scrappy family-run diner into Rose & Sons was completed with the addition of a backyard patio, a plein-air shipping-container kitchen and bar and an outdoor-only grill menu. Rose skips saucy southern BBQ fare for a backyard cookout feel, treating seasonal whole fish or sugar-and-coffee-crusted flank steak to a nice, quick searing and packing the sides menu with picnic-table faves like slaw, potato salad and Frito pie. 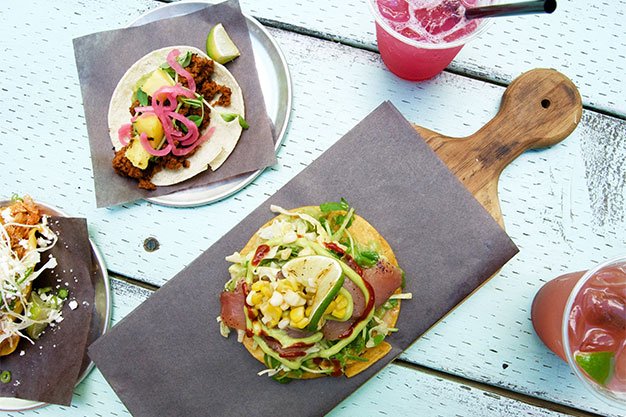 Just down the street is Dupont’s other restaurant patio with its own name and menu: La Libre, the backyard annex of Playa Cabana Hacienda. Dishes cooked on a backyard charcoal grill and a converted oil-drum smoker are at the heart of a Yucatan-inspired menu exclusive to the patio, which is swathed in fairy lights and painted in sun-faded brights. Menu options change daily, but a tostada topped with seasonal fish (on one recent visit, an impossibly smooth tuna) and apple wood pork ribs make excellent use of the smoker, while pork al pastor for tacos is slow-roasted on an outdoor trompo grill. Even fruit-infused mojitos and margaritas are mixed out back while you watch. 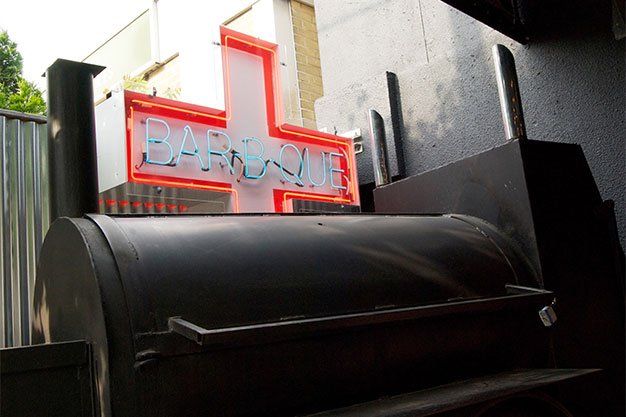 The grills are always going at Parkdale’s favourite house of bourbon and meat, but on Saturdays in the summer, the Grand Electric affiliate fires up the smoker on the front patio for a lunch cookout from noon to 4 pm. Your options include tri-tip steak (aka “the poor man’s roast beef”), a daily sausage special, corn on the cob, smoked chicken leg and a “big boy” platter that gets you a little bit of everything.

The Parkdale snack spot and bar is already a popular late-night hangout for food industry types getting off shift. On Sunday afternoons, the place pulls those off-duty cooks back in by opening up its cozy, wood-panelled backyard to visiting grill-masters for a barbecue. The list of featured guest chefs for the series reads like a who’s who of laid-back west-end eating: recent visitors include cooks from Rude Boy, Whelan’s Gate and Local Kitchen & Bar. This Sunday, they celebrate the two-year anniversary of the series with a fry-up courtesy of WVRST’s James Hall, starting at 2 pm.

Sometimes the dumplings and BBQ buns from the entryway of this no-longer-a-secret Kensington Market spot just aren’t enough to tide you over. Thankfully, their Sunday BBQ series, dubbed Cyndi’s Day Off in honour of the bar’s tireless dim sum specialist, features guest chefs from around town manning the grill. (Some of the more notable takeovers: Momofuku, Valdez, Playa Cabana, Patois, Home of the Brave, Harbord Room and Marben.) The series continues all summer long – keep an eye on their Instagram (@coldteabar) to find out who’s coming next. 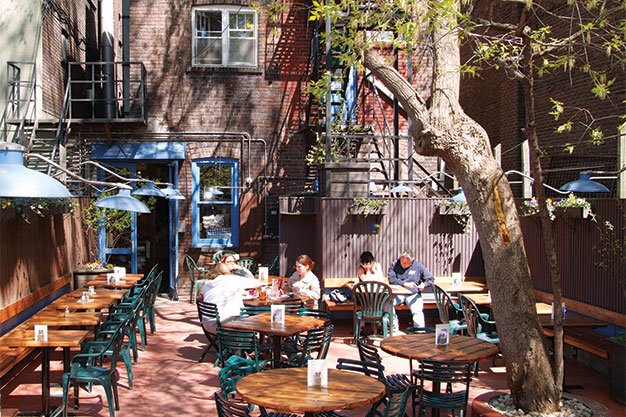 This venerable Danforth steak house uses an outdoor grill, located just off the gorgeously willow-shaded backyard, to great effect during the summer. The menu grows by a full page come patio season, thanks to a weekly rotation of BBQ selections that should keep everyone happy, from meat–eaters (locally farmed, hormone- and antibiotic-free T-bones and prime rib steaks) to pescatarians (Florida swordfish, whole trout and ahi tuna steaks) and herbivores (seasonal veggies charred to the point of sweetness, paired with goat cheese).

For warmer months, the Aga Khan Museum’s on-site restaurant has the use of a glimmering-white patio space. The kitchen artfully merges a host of cuisines to create a culinary trip through Islamic history. A summery twist on the menu features a trio of mains – Tanzanian mishkaki beef, tamarind-glazed snapper and chicken done in a lemon-chili-yogurt marinade – grilled on the open-air barbecue and wrapped in naan. Starting in July, Diwan teams up with local restaurants for grilling events – look for a takeover from Simba Grill on July 10 and 11.